Josh Hernandez, who just completed his second season in the AMS Leasing Pro Mod Challenge, may eventually go on to bigger and better things.

He may win more races, earn championships and set records. But in all likelihood, he will be remembered for his pass down the quartermile on Oct. 22.

Hernandez sets his place in history 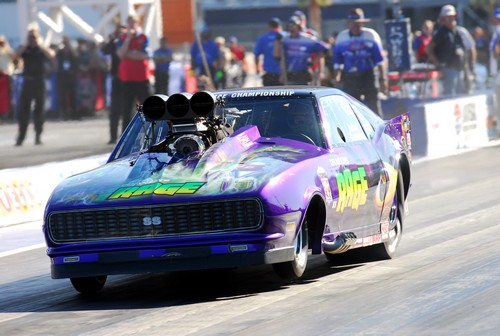 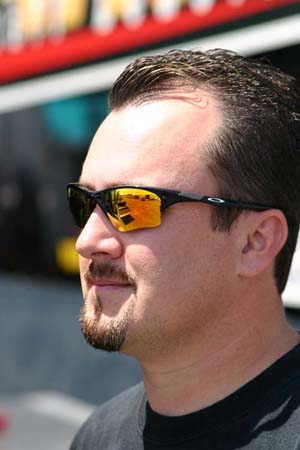 Josh Hernandez, who just completed his second season in the AMS Leasing Pro Mod Challenge, may eventually go on to bigger and better things.

He may win more races, earn championships and set records. But in all likelihood, he will be remembered for his pass down the quartermile on Oct. 22.

He forever put his name in the record books that night in Rockingham, N.C. when he became the first Pro Mod driver to make a five-second run, achieving immortality when he scored a second-round victory over Tony Pontieri at the IHRA World Finals with a 5.990 pass at 236.80 mph. Hernandez would lose the next round, but it didn't matter. History had already been made.

The importance of the accomplishment is not lost on Hernandez, whose had two solid years in Pro Mod racing.

"It's a pretty exciting deal," said Hernandez, the 2005 AMS Series Rookie of the Year. "There's no words to really describe how good it feels to be the one to accomplish it. There were so many teams who were searching for that number, and honestly, the number speaks for itself. We're really excited to be the one in that position.

"We pushed it harder and harder. Everybody was. Everybody wanted to be the one. It's just so hard to do. You had to have the right conditions and have all the stars line up. It was that way for us, and it worked out. And there's the number." 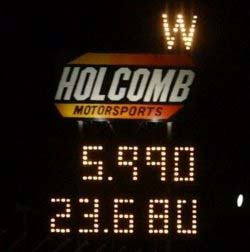 Some rated it equal to some of the drag racing's other big milestones, including Kenny Bernstein making the first 300-mph pass at Gainesville, Fla. in 1992, and Eddie Hill motoring to the first sub-five-second run at Dallas in 1988. While Hernandez wouldn't compare it to any of the other major milestones in the sport, he does appreciate it for what it meant to Pro Mod racing.

It was the latest accomplishment for Hernandez, who just finished his second consecutive solid campaign in the AMS Pro Challenge. The former Montgomery County (Texas) deputy sheriff finished a strong third in the season standings after scoring two wins during the eight-race series. He also was strong in IHRA competition, winning twice and setting on the world on fire with last month's historic record-setting run.

"It was a great sophomore year, and coming off a great freshman year," Hernandez said. "It took us a while to work some stuff out, but after that, we've been very consistent, and we seem to get from one end to the other pretty often."

But not always, and it's those on-going lessons that excites Hernandez about competing in the AMA Pro Mod Challenge.

"Every pass on the car you learn something new," Hernandez said. "You learn either what do to, or what not to do." 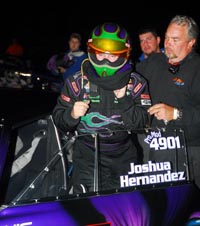 He literally earned his racing stripes early on during his rookie year last season, as one of Hernandez's first runs in a super-charged doorslammer wasn't exactly record-setting. Hernandez, while making an elimination pass during the Pro Stock Super Bowl exhibition race in January, 2005, got loose and bounced on the retaining wall in a crash at Houston Raceway Park. He was unhurt, with the only real damage being to his psyche.

"It wasn't that eventual of a crash," Hernandez said. "It really just hurt my feelings and my pride, more than anything else. My entire team stayed behind me 100 percent and I was right back in the saddle with all the confidence in the world right after that.

"I just didn't know when to stop. I had done what I usually do, and what I could get away with in the other cars I've driven, but you can't get away with that in a Pro Mod."

But Hernandez, who would go on to be the 2005 AMS Rookie of the Year, had the last laugh nearly three months later when he won the O'Reilly NHRA Spring Nationals at the same Houston Raceway Park. He exorcised his demons at the facility by defeating Dan Rowe in the final, running in same lane that he had crashed in just a few months before.

"It was kind of poetic justice," said Hernandez, who beat Rowe with a solid 6.122 pass. "It sounds strange and ironic. I was running the finals in the same lane that I crashed and had the same thing happen, except this time I pedaled it. So to be able to pull that off with all the emotion, it was honestly a story-book ending to a great weekend."

But his memorable season, though, was far from over. His success continued with a final-round appearance at the U.S. Nationals, where he was runner-up to Jay Payne, and a victory at Las Vegas in October. The win at The Strip at Las Vegas Motor Speedway provided the cap to a successful season that saw him win 13 of 21 elimination rounds and earn the series Rookie of the Year honors. 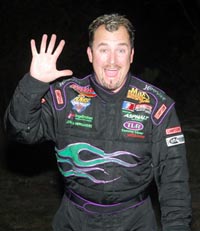 The outlook looked strong coming into this season, and Hernandez hasn't been a disappointment. He earned a second third-place finish in the series with two impressive victories, winning again at Houston in April and getting his first win at the U.S. Nationals. He also advanced to the semifinals at the season-finale in Las Vegas.

"I'm, of course, confident in my team," Hernandez said. "But to me overconfident would be unrealistic, because we are one of (many) teams who come to these races and know how to win. I have a lot of respect for these guys. I've seen them race for years. I know my guys will prepare my car right. I just have to do my job. And they didn't' let me down."

Which is all he has ever asked for.

"I love what I'm doing right now," said the former deputy sheriff. "I like coming to the races everyday and being able to race anywhere they let me race. If it's a Super Stocker, a Pro Mod or a fuel car...I don't' really care. I'm living the dream. I get to go race for a living."