STILL WAITING FOR AN AN ANSWER

The hope is to get the OK from King County to amend the motorsport facility’s conditional use permit that would allow a new strip to be built and sunk into the ground on the west end of the 320-acre property. The NHRA-sanctioned track, located in South Puget Sound, about 30 miles outside Seattle, is home to 300 events each year. 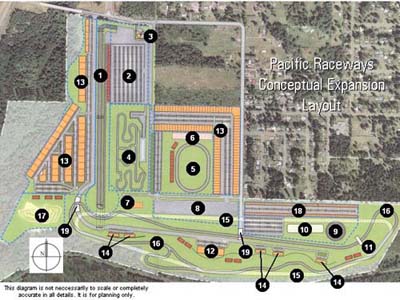 The hope is to get the OK from King County to amend the motorsport facility’s conditional use permit that would allow a new strip to be built and sunk into the ground on the west end of the 320-acre property. The NHRA-sanctioned track, located in South Puget Sound, about 30 miles outside Seattle, is home to 300 events each year.

The Fiorito family, which already has made $5 million in improvements since taking managerial control of the property in 2002, is proposing an estimated $135 million renovation plan of the storied motorsports facility.

Knowing his track depends largely on revenue generated by the drag strip, Fiorito is making it a priority to get a new, relocated strip up to speed.


“We feel like it is something that the community, if well informed, will support,” he said. “We don’t anticipate any opposition.

The relocation of the track won’t affect any sensitive areas and obviously, it’s a noise-reduction move. … Environmentally, we know it will work and we know the proposal will be well received.”

If all goes as planned, groundbreaking could begin as early as next spring. Construction possibly could begin by the middle of next year with the intention of having the relocated drag strip ready for racing in either 2008 or 2009. Track officials are in the process of proposing the plan to the King County Council.

There are many hurdles to clear. To better prepare and expedite matters, Fiorito has hired a consulting firm to handle any issue as they approach the county for ultimate clearance. The firm is addressing all angles of the relocation phase, from environmental to cosmetic concerns.

“I have a few balls juggling in the air right now,” Fiorito said of the project’s groundwork. “We’re really pouring a lot of energy into the relocation of the drag strip and the master use project.”

In the meantime, Pacific Raceways’ existing south-side drag strip – which originally was built in 1959 and since has been repaired, resealed and partially repaved – will stay in business. The idea is to keep the pros and sportsman drivers coming until the relocated track becomes reality.

A new track is vital to the future health of the sport in the area.

The $50 million Powerade Drag Racing Series is the track’s bread and butter, its largest customer. And the NHRA repeatedly has indicated it wants to keep the Northwest market.

Each summer the Northwest Nationals, a three-day summer race that attracts about 80,000 fans, pumps in millions of dollars into the local economy. And in a region devoid of a NASCAR Nextel Cup race, the NHRA remains the state of Washington’s lone major-league player in motorsports.

To meet the growing needs of fans and drivers, Fiorito wants to upgrade the facility. Drivers, both young and old, have complained that the worn and weathered track has fallen behind the times. Those same fans and drivers have pleaded for drastic improvements.

Fiorito has listened and responded.

Gravel removed from the facility’s approved shift kart track already was sold to the Port of Seattle, with the proceeds paying for all-aluminum grandstands that were built along the tower side of the existing drag strip. The grandstands provided 11,500 reserved seats, as well as several thousand general admission seats, for the summer nationals.

With the climate and the conditions up there, a new track would put up national records. It would be a killer track. - Funny Car driver Ron Capps
The relocated strip would be built on the west end of the property, parallel to Highway 18, and further away from adjoining homeowners. The new drag strip would run north and south, which would eliminate late-afternoon sun problems for racers. Teams also would have easier access to the new strip off the highway.

Furthermore, the new drag strip will be sunk about 20 feet into the ground to help reduce noise.

“With the climate and the conditions up there, a new track would put up national records,” said Funny Car driver Ron Capps. “It would be a killer track.”

The relocation of the drag strip is just one phase in the ultimate project. Fiorito points out that the construction of a motorsports business complex is the next step, a necessary one to support the facility. The next phase also calls for the building of a 3/8th-mile paved oval in the center of the property.

The banked oval would be built with regional tour racing in mind. And since no Nextel Cup race is run on tracks shorter than a half-mile, the proposed oval would fit regional stock car and open-wheel circuits.

Work also continues toward remodeling the raceway’s 10-turn, 2.25-mile road course. Fiorito has said a new design has been struck for the lower end of the road course that would widen the track and make it safer for competitors. Such moves also would upgrade the road course’s certification to FIA-2 status, making it eligible to hold bigger types of sanctioned races. 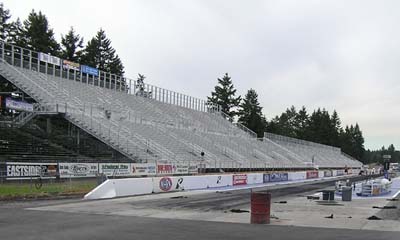 Fiorito said the renovation project is going along well, but acknowledged it could be an exhaustive endeavor.

“We’re going to meet with different community groups that surround us and start the education process,” he said. “If we do our job in educating, then we can demonstrate that this is a site benefit.”

Fiorito is optimistic that his dream of a versatile, well-conceived motorsports complex will come to fruition in the next few years.

“It still gets me up every morning. This is a full-time job,” he said. “We never lost sight of the end-all goal and that is to bring to the region a world-class racing facility.”