May 26 had started out as a pretty good day for IHRA sportsman racer Eddie Pauley. Journeying from his home in Shelby, NC, he had gotten on the road a day early to make the Mr. Gasket Pro-Am Tour Race in Douglas, GA, an IHRA Division 9 points meet. “When you plan to do something and it gets to be time to do it, something always goes wrong,” he said. “I’m always running late, I’m always in a frenzy to get somewhere, but this time I went by myself. I left in plenty of time to get there, it was a beautiful day, and I was thinking, ’man, things are actually going good!’ And then--ka-blooey.” 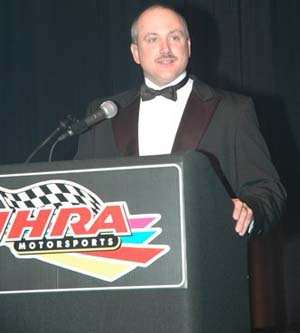 May 26 had started out as a pretty good day for IHRA sportsman racer Eddie Pauley. Journeying from his home in Shelby, NC, he had gotten on the road a day early to make the Mr. Gasket Pro-Am Tour Race in Douglas, GA, an IHRA Division 9 points meet. “When you plan to do something and it gets to be time to do it, something always goes wrong,” he said. “I’m always running late, I’m always in a frenzy to get somewhere, but this time I went by myself. I left in plenty of time to get there, it was a beautiful day, and I was thinking, ’man, things are actually going good!’ And then--ka-blooey.”

On two-lane Highway 441, just below Madison, GA, Pauley was unable to stop for traffic, veering into the path of an oncoming tractor hauling a wide load. The resultant collision fortunately left no one injured, but utterly destroyed Pauley’s entire race operation. His motor home: totaled. Enclosed trailer: shredded, along with everything inside, including a ’78 Chevette Hot Rod car and the ’01 Horton Rear Engine Top Dragster with which he was chasing the points championship on the IHRA Mr. Gasket Pro-Am circuit.

IHRA’s Hot Rod champion in 2004, Pauley is an experienced drag racer used to setbacks. However, a catastrophe of this scale would put anyone at wits end. “Me and my dad are no different than any other racers, especially a sportsman guy,” he explains. “You put your whole life into it; nickels and dimes, swaps and trades, buys and sells for 20 years to have what little bit you’ve got, then for it all to be gone in a matter of minutes.”

Stranded in the middle of Georgia, surrounded by the wreckage of his adored avocation, Pauley was devastated. At the time he didn’t realize that he still had one resource: friends. 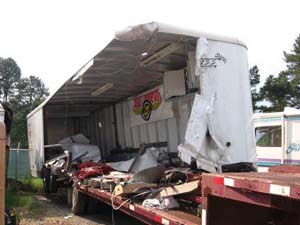 “We had a customer, Bo Upton, going to the race, and he called me,” said Scott Duggins, owner of PAR Race Engines and a longtime associate of Pauley’s. “He said he had been in a traffic jam for 2 hours when he saw Pauley’s Chevette on a rollback all torn to pieces. We started calling Eddie, and when we finally got in touch with him of course he had just went all to hell.”

Duggins promptly cleared space in his own trailer and left his Spartanburg, SC, shop for the accident site. By the time he arrived the wreckage had been moved to a salvage facility, but the damage was far worse than Duggins could have imagined. “He didn’t have anything left; from his 3-wheeler to his toolbox, everything was mangled. His Chevette probably took the least amount of damage, and that car wasn’t worth fixing.”

Focusing on repairing the dragster, Duggins was able to salvage the motor back at PAR. “Eddie’s the type of guy that if he can’t win enough money this week, he can’t go next week,” said Duggins. “I knew the boy was winning. I knew if he were out there on the track he would win it, and probably win enough money to try to get his stuff back. I had another car that I had bought from Race Tech a few months ago and never had time to put together. So we started busting butt getting it put together for him, because when someone takes a devastating blow like that, I thought the best therapy would be for him to get back on the racetrack.”

With Duggins’ dragster, his dad’s pickup truck and a loaned trailer, Pauley did precisely that. “At the time of my accident I think I was in second behind Kenny Young,” recalled Pauley. “At my next race I was able to get entry points and go a couple of rounds, but by the time we got to Carolina Dragway (Jackson, SC, Sept. 16-17), I was in 4th place.” 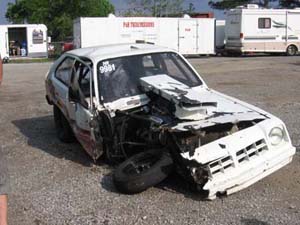 Carolina was a ’double header’ with points races on both days, and Pauley was able to runner-up both days, pretty much giving him a lock on the Division 9 Top Dragster title. But his friends’ altruism didn’t end with Pauley‘s successful return to the track. Knowing that Pauley still owed money on the trailer and motor home, Scott Duggins decided he had to do more.

“I was going to do a little trust fund on the Internet,” he said, “but I thought maybe we’d do better with an engine raffle.” Duggins started with a 565 big block he built with contributions from Brodix, Manley, Eagle, Edlebrock, and Crane. Complete from carb to pan, the bracket motor is valued at $15,000. When word spread through the drag racing community of Duggins’ plan, further contributions expanded the raffle to include as second prize a PTC Powerglide with 1.80 straight cut gears, Pro Tree brake, 10 clutch drum, and Dedenbear case valued at $3500. Third prize is a Classic Trailers 12 x 6 motorcycle/utility trailer from Hickory Enclosed Trailer Sales valued at $2600; Fourth prize is a $2000 certificate off the purchase of a new Mac Sherrill race car chassis; Fifth prize is a Greg Slack converter valued at $1000; and sixth prize is a certificate for chrome work from Flintstones Motorsports.

With tickets at $50 a piece, the raffle drawing was originally scheduled for the August 26 IHRA World Nationals in Norwalk OH, but because of rainouts the drawing was pushed back to October 20 at the IHRA UTI World Finals at Rockingham, NC (To purchase tickets or need more info please call PAR at 864-578-5622).

“I just didn’t realize that one, how good people are, and two, just how many friends you have,” said Pauley. “You don’t really realize how many people want to help when things go wrong. I’d probably still be sitting in Georgia if it hadn’t been for Jimmy Raper, J.J. Brock, Scott Duggins, Jody Putnam and Brian Neal. They say drag racing is like a big family. Well, it‘s true. I love drag racing; it‘s been good to me, I‘ve met a lot of good people.” 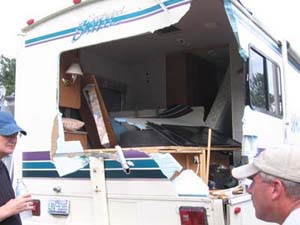 All this support has left Pauley overwhelmed. Why does he, of all people, deserve such beneficent patronage? “You have a low opinion of yourself a lot of times, I guess,” he said. “When you see the kindness of others, it really makes you feel undeserving. It’s just been a roller coaster. People have been calling, not necessarily to help but just to check on me. That meant as much to me as anything. The other day I got an e-mail from a guy that I didn’t even know.”

This individual recommended Pauley call Bruce Litton for emotional support, since the Top Fuel Dragster had once lost his entire shop to a 2002 fire. “I think I woke him up, but he was a super nice guy,” Pauley reported. “I told him I had these mixed feelings; I didn’t want to come out of this situation and be better off than I was. I just wanted my stuff back. He told me the stuff that I lost was just that--stuff. All of that can be replaced, and it’s going to be better, and you’re going to be a better person. All you can do is pass it on.

“It really has made me examine myself; to give people a chance whether you really know them or not. I hope that I’m in the position someday where I can really help somebody. Because for Scott and everybody who donated something for the raffle, to the people who called in support, who bought the raffle tickets--how do you ever thank somebody for that?”

Well Eddie, let’s give it a shot. On behalf of Eddie Pauley, his wife Deanna, daughter Madeline, and son Dawson (soon to become a jr. dragster), we’d like to sincerely and gratefully thank the following: Scott Duggins of PAR Race Engine, Jesse Bignel of BIGS Performance Carburetors, Mac Sharrill at Sherrill Race Cars, Kenny Ford at PTC, Jeff Pittman and Nancy Travis at Hickory Enclosed Trailers, Eric Boyd at Flintstones Motorsports, Mickey Thompson, AutoMeter, Steve Byrd, Jeff Edmonds, Mr. Gasket, ACI and anybody else who’s willing to lend a hand to someone when the chips are down