Drag racing is a sport where how you start is just as important as how you finish. In fact, it often can be the difference between winning and losing.

Because of it, competitors will do almost anything in chase of that hole-shot advantage. 13-time champion John Force takes a quick dose of oxygen, while others spend hours on the practice Christmas Tree.

Mike Ashley, a former AMS Pro Mod champ who is now in his second year driving a Funny Car, has found a different method. 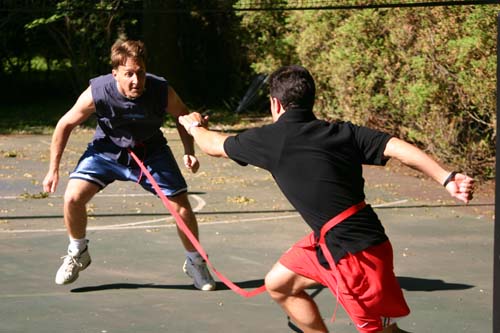 Steve Calvacante runs FWD (Fitness with Direction) and has developed a workout program for FC racer Mike Ashley that simulates his driving experience.
Drag racing is a sport where how you start is just as important as how you finish. In fact, it often can be the difference between winning and losing. Because of it, competitors will do almost anything in chase of that hole-shot advantage. 13-time champion John Force takes a quick dose of oxygen, while others spend hours on the practice Christmas Tree.


Mike Ashley, a former AMS Pro Mod champ who is now in his second year driving a Funny Car, has found a different method.

"I spoke with my trainer and we put together some reaction-time exercises that have really helped my hand and eye coordination, and the ability to react to what my eye sees. So as soon as I see something, I can react quicker."

The procedure features Ashley, wearing his race helmet, sitting on a chair, while with his trainer, standing a few feet away, throwing tennis balls at his head. Ashley holds up a medicine ball at chest level, and tries to deflect the thrown projectiles by using the medicine ball as a shield.

The exercise also includes a third member, who is standing to the left of the trainer. This individual is holding up cue cards with mathematical equation, such as 5x5, 10x7 and so on. So while Ashley has to look straight ahead so he knows when to block the tennis ball, which is coming right at him, he also has to use his peripheral vision to view the equation and give the correct answer.

Holding a weight to simulate a steering wheel, Steve tugs on the rope in an attempt to break Ashley's death grip.
"It's interesting," Ashley said. "I have to look to my left and yell out the equation and at the same time look for the tennis ball. I have to look to the left, say where the Christmas Tree might be, and say, 'Fifty-Six,' and block the ball. 'Seventy-seven,' and block the ball. "It's pretty good. I think it's working real good."
And the back half of the 2006 season has gone pretty good for Ashley, who has become one of the more consistent competitors in the class.

"The big difference has been switching teams," said Ashley, who in July moved from competing under the Worsham Racing umbrella to Don Schumacher Racing prior to the Mopar Mile-High Nationals in Denver. "We initially were an extension of the Del Worsham team. That was good for me. But we decided before Denver that we wanted to make a change. We hooked up with Brian Corradi and went with Don Schumacher Racing. And that's been the big difference.

Steve ties a rope to himself and Mike in order to work on side-to-side physical co-ordination.
"Sometimes, you just need a change. We made that change, and we've been doing pretty good."

It's been more like a metamorphosis for Ashley, who while being a good bet to qualify during the first half, failed to win a round in seven elimination match-ups. He also failed to qualify at three events.

But since making the move, Ashley is 8-9 during eliminations including advancing to the semifinals at Sonoma in late July and scoring a runner-up finish at Dallas in September. The Gotham City Racing Knoll Gas/Torco Racing Fuels team has also improved its performance. They have qualified ninth or better at each of the past six events, with a career-best second at Reading, Pa.  Only two other competitors -- Tommy Johnson Jr. and Robert Hight -- had a better qualifying average since September going into this past weekend's rain-delayed Torco Racing Fuels Nationals near Richmond, Va.

In this procedure, Ashley sprints through each individual square and turns around to face Steve just as a thrown football arrives. This develops timing.

"We've been running pretty good," Ashley said. "I like to think we are a pretty consistent car. A lot of it has been changing teams, but it also has to do with me getting used to the car"

The first signs of that improvement came two races into this transition when he advanced to the semifinals at Sonoma, where Ashley qualified ninth before beating former teammate Phil Burkart Jr. in the first round and getting by Robert Hight with passes of 4.884 seconds and 4.975, respectively. His day ended with a loss to Tony Pedregon.

The team then qualified eighth, ninth and ninth at the next three races before stepping up with a No. 3 position at Dallas and a No. 2 at Reading. He also scored his first runnerup in the POWERade Series with a final-round appearance at Dallas, losing to Hight in the finals.

"We are starting to find our groove and you're seeing the progress," Ashley said. "It gives you a lot of confidence when the car is running like that. You know you have a pretty good car, and all you have to do is do your job. That's pretty big for me. I come from driving a championship car when I was running Pro Mod, and that's what I'm used to, and it's what I want to be in.

"I want to compete. If I'm going to be away from my family 23 weeks out of the year, and make that big sacrifice, I have to be able to win races. I have to win without just getting lucky. We want to win with just being able to flat out run them. And right now, we have a car that keep up with anybody, including Force, Hight, anybody." - Mike Ashley
Ashley also credits his time in the Pro Mod Class, which he dominated the past two seasons while winning back-to-back series championships.

It also was able to provide him with that winning experience, which now he his hoping to achieve in the Funny Car before the end of the 2006 season. But he is not just hoping he wins, he envisions it.

"I'm expecting to win," Ashley said. "I wish they were more races (left in the season). I know it's not easy to win one of these things, but I know we have the car that can win. That's why we go to these races. I know we are going to go rounds. It was good to go to the finals (at Dallas). We've gotten our runnerup, we've been to the semifinals, a bunch of quarterfinals, and, unfortunately, we've had first-round losses too...I've had my fill of every other experience, now I'm ready to feel the experience of winning in Funny Car." 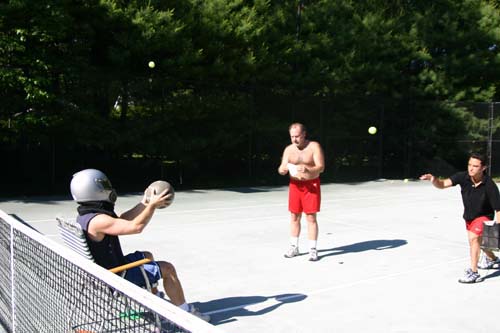 The most intensive part of Ashley's workout consists of regimen that includes a tennis ball being thrown at him and using a 20 pound medicine ball to deflect the throw. This action takes place while simultaneously computing flash card equations. 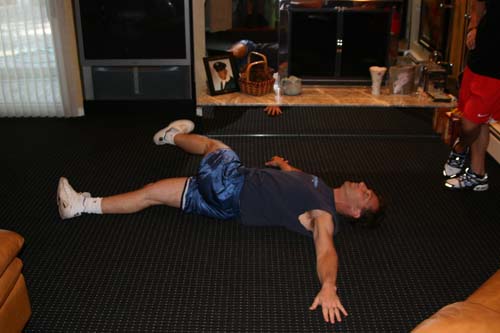 An important part of his driving exercises includes a lengthy stretching session. 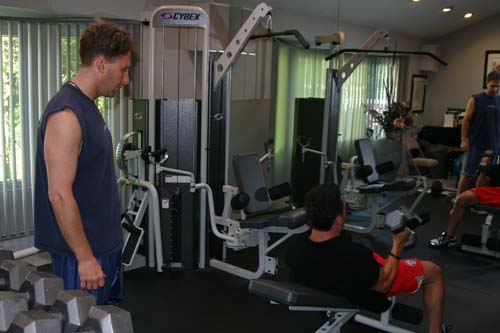 Ashley receives instruction from Steve on proper muscle development to coincide with the physical demands he faces with an 8,000-horsepower Funny Car. 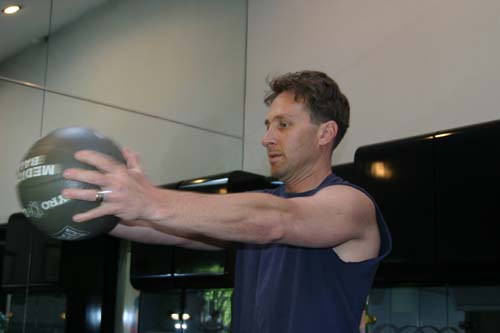 Even a simple medicine ball excercise works on abdomen strengthening as well a better grip on a Funny Car steering wheel. 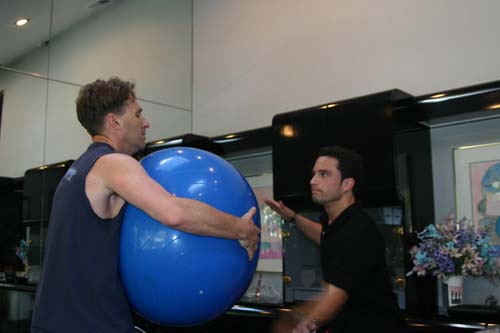 Concentration is the name of the game when Steve is doing all he can to knock the massive ball out of your hands.