Dale Pulde didn’t know physically  if he was  up to the task. When it came to driving his nostalgia nitro Funny Car, the spirit was willing but the flesh was weak. Regardless he had to give it a try. 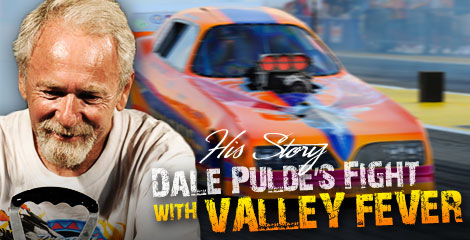 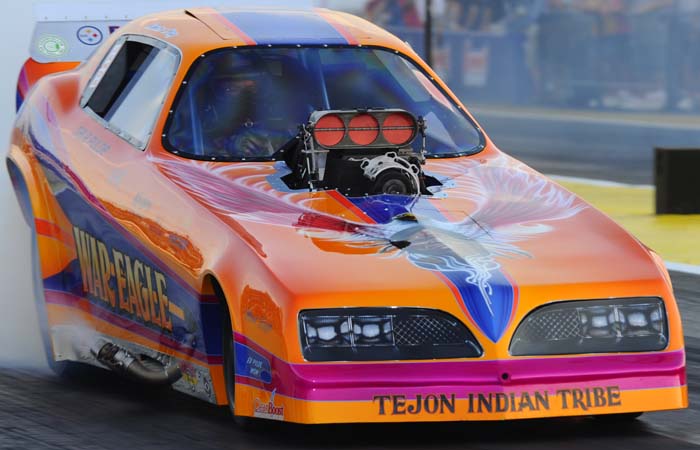 
Dale Pulde didn’t know physically  if he was  up to the task. When it came to driving his nostalgia nitro Funny Car, the spirit was willing but the flesh was weak. Regardless he had to give it a try. 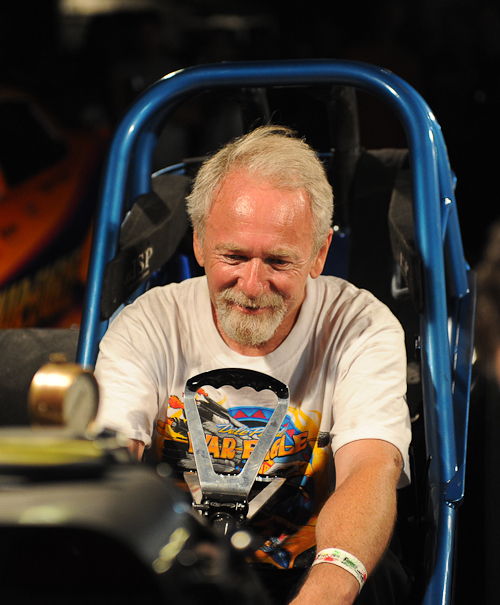 His crew, led by Mark Leigh, made sure that every task was covered and along with Day, ensured the race fans wouldn’t be disappointed.

“I really had no chores other than to keep up with the fans and make sure I kept my strength up,” Pulde explained.

Just keeping his strength has been a chore for the highly independent Pulde, who for the first time since his hospitalization in January, has talked to the media about the illness which nearly killed him.

This was an illness doctors didn't initially diagnose and one which Pulde didn't realize either.

All Pulde knew is that as the 2010 year progressed, his stamina levels and immune system began to wane.

“When we first started building on this car in 2010, making the brackets, [crew chief] Mark Leigh asked me if I was interested in doing this or not,” Pulde recalled. “I just had no energy. I just couldn’t focus. Tasks which took me normally an hour to do were taking three days and eventually Mark had to finish.”

Pulde realized at this point something was wrong and despite numerous doctor visits, no one could pinpoint what was ailing him.

“They tried telling me I was 60 years old and that could have been the problem,” Pulde said. “I told them I was 59 last year and didn’t go completely nuts overnight. My energy level was shot. Before this, I was able to go out to my shop at 8 AM and work until 9 PM. Something had changed.”

IT STARTED WITH A COUGH

For the last three years, Pulde said he has gotten sick, regrettably admitting it usually coincided with the fall Bakersfield event. 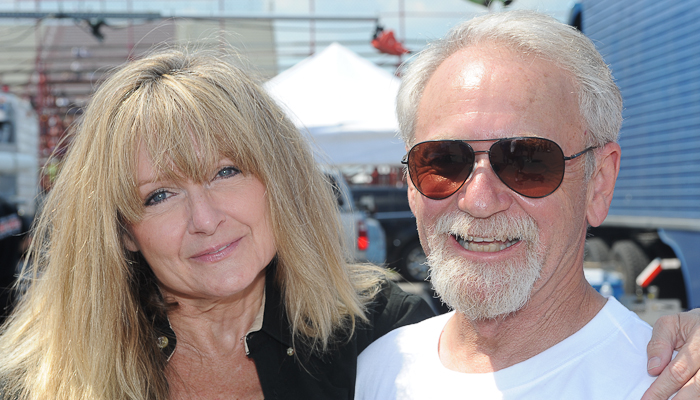 “They’d [doctors] give me the trick cough syrups and medicines, but nothing seemed to make it better,” Pulde said. “The only way to beat it was to lay in bed and rest. By the first of the year I was usually better.

By the time the 2010 California Hot Rod Reunion rolled back around in the fall, Pulde’s physical well-being had started going downhill again. The struggle began with a cough. The cough was nothing new to Pulde as it nearly became a tradition usually after the popular event.

Pulde and his team stayed over after failing to make the show in Bakersfield and reworked nearly every aspect of the car before heading down the freeway to Phoenix for the next event. The event went well in Phoenix and upon arriving back home, Pulde traveled with longtime companion Valerie Harrell to pick-up one of her dad Dickie Harrell’s former cars. The trip was taxing for Pulde who said he collapsed in exhaustion once they got back home.

“From that point, I was down,” Pulde said. “The doctors believed I had this for a while but because I burned the candle at both ends for a while, it basically drained me all the way down. It got me.”

Pulde’s condition worsened to the point he was admitted into the hospital where doctors ran a battery of tests with no definitive answer. Harrell, who witnessed the illness take its toll, was determined to find an answer.

She began an intensive online study focusing on Pulde's symptoms. Then it occurred to her, a year earlier, fellow nostalgia racer Jack Harris had sent over a fax regarding the symptoms of Valley Fever. Harris had previously counseled Pulde regarding the cough and how his doctors were slow to diagnose his case of Valley Fever too.

The combination of Harris’ Valley Fever experience, which was contracted in Utah from dust attributed to nearby mining, and the recollection of a helicopter stirring the dust in Bakersfield was enough for Harrell to draw a definitive conclusion.

Harrell believed Pulde had Coccidioidomycosis, more commonly referred to as Valley Fever, a disease which attacks the body’s respiratory system.

It has been determined the fungus comes from spores in the dirt in and around the San Joaquin Valley. Kern County, the county for which the Bakersfield facility is located, is considered to be hyper-endemic for the disease.

“When it first showed up on my right lung, I was told initially that I may have cancer,” Pulde said. “I was admitted into the hospital when I began coughing up blood and running out of breath. The hospital I went to is part of the UCLA Medical Center, and the doctors there were great to me. Their initial diagnosis didn’t include Valley Fever. I honestly didn’t think they wanted to believe it was that.”

According to Pulde, a blood sample was sent off for special testing. The tests returned with a recommendation for Pulde to be put on antifungal medicines and other necessary treatments. The medicines were just the opposite of what he needed for treatment.

“They still weren’t really sure of what was on my lung,” Pulde said. “The tests were inconclusive.”

Pulde returned three weeks later for yet another CT scan. Two days after the scan, the pulmonary doctor called to check on Pulde. Pulde’s scan hadn’t worsened but then again, it hadn’t gotten any better either.

“He asked how I was feeling and I was coughing so bad I could hardly speak,” Pulde said. “This was on a Friday and he told me to get in there first thing Monday morning.”

Pulde didn’t last until Monday morning and Harrell took him to the local hospital’s emergency room.

“The large mass of fungus on my lung had gotten full of bacteria and blew up,” Pulde said. “I just swelled up like I was going to have a baby. I was barely breathing and didn’t realize my body was jumping around on the bed because of the pain. Valerie had been ready to take me to the emergency room a lot earlier and I finally agreed about 1 AM on Sunday that we needed to go.”

Doctors administered morphine but the narcotic did little to ease the pain.

Pulde was x-rayed and upon examining the scans, the specialist couldn’t believe how bad his condition deteriorated in such a small amount of time. At first, Pulde added, “They thought they had the wrong scans.”

Pulde underwent a surgical procedure when the doctors had to insert a tube into his side and ran it between his stomach lining and his lungs. a procedure Pulde said, "hurt terribly.”

“They drained a full liter of fungus and liquid out of my lungs,” Pulde continued. “As they did it, I could feel my stomach begin to go down. They drained me for a day or so, and it kept pumping that stuff out for days. They ended up giving me the strongest antibiotic [AnphotericinB] in the hospital every day.”

Pulde’s weight plunged and he estimates losing about 20 pounds. He got to a point where the smell of food repulsed him.

“It’s a crappy way to lose weight, sort of like inheriting millions from someone you love when they die,” Pulde said.

Pulde had a second procedure and this time the doctors went in through his back and retrieved 500 cc’s more of the fungus through a vacuum pump. Then it eventually dropped to about 15 to 20 cc’s per day.

“They sent me home and I laid here for about a month trying to get my energy back,” said Pulde.

THE ROAD TO RECOVERY, NORWALK 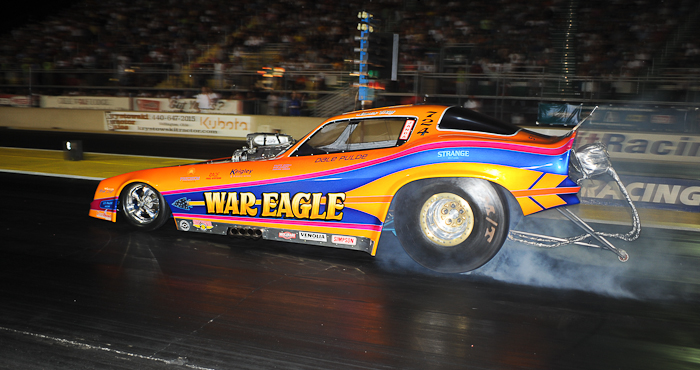 Once Pulde got home he realized he’d lost a good measure of his muscle mass. He slowly worked himself into shape with each passing day in preparation for Norwalk. The day arrived quickly for Pulde, who had listed the Norwalk date as recovery milestone in his rehab.

Pulde, long known for being aggressively smart as a driver, forced himself to get into race mode on the conservative side.

“I purposely didn’t eat anything all day long because I wasn’t sure how food would react to my medicine and the physical demands of driving,” Pulde said. “The way this medicine is, I never know from one day to the next how it will make me feel. As soon as the event was over, I made a beeline for the concession stand. I woofed down that hot dog.”

From the moment he sat in the car on Saturday, Pulde said he felt comfortable.

He admits he didn’t believe he was the best driver in his pits, suggesting Day could have done better, but this time winning and losing played second fiddle to just playing the game.

“It was a long weekend and I’m paying the price for it this week,” Pulde admitted. “I came home and I told Val. I was tired but I lived up to my agreement and my contract. In the back of my mind I believed it could be my last chance to be in the car. Valerie reminded me how the doctors couldn’t believe it because I was just hours away from being in the morgue.

“The fans, people, longtime people really made me feel great. Those who stayed in touch when I was sick … you put me in that car this weekend. This weekend was for you. I realized I had friends I never thought I would have.

“During this time my crew chief Mark Leigh and the crew were a blessing. They kept the car maintained and this was something I clearly couldn’t do. The engine in transmission in the car belongs to John Powers and I figured when I got sick he was going to take it all back. He bitched about it but that’s just John. I will say this; if it were not for him, there never would have been another War Eagle car out there.”

And for Pulde, just driving again, was a better medicine than the doctor could have ordered.