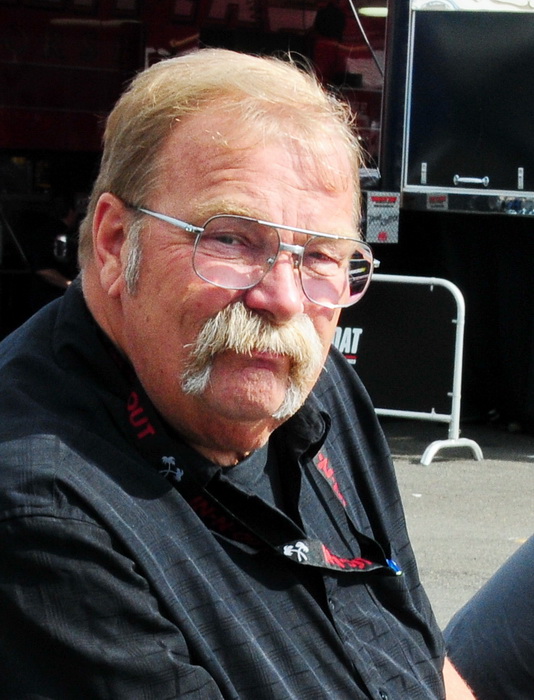 Larsen has always considered himself a happy person. He lives a different kind of happy at 64 years old. His elation comes in reaching a milestone of two decades of being drug free and sober. The vices which once consumed his life are now as distant as one end of the universe from the other.

Larsen’s personal demons of addictions and substance abuse were byproducts of the 1970s drag racing lifestyle where nitro racers and their crews were considered in many circles as one notch lower than rock stars.

“I’ve done this sport for 46 years and I’m a child of the 1960s from southern California,” said Larsen. “I grew up with some of the problems of abuse. I grew up with both parents as alcoholics. I drank some and smoked some pot. I did other things I’m not proud of. My misspent youth went into my 40s.”

Larsen credits former Funny Car racer Jim Epler for staging the intervention he believes saved his life in 1991. Epler's actions spoke as strongly as his words with a trip to rehab.

“I owe Jim and Susan Epler a debt I can never repay,” Larsen said. “Nothing is more important in my life than my sobriety. I raced with [former Top Fuel champion] Jeb Allen and it’s well known that he also had issues. He’s got two years [of being clean] on me and I couldn’t be prouder. I know he’s proud of me. Once you figure out the tools, you should be able to deal with it. I have sympathy for those who have the problems but once you have the tools you ought be able to deal with it.”

Larsen speaks from experience hoping his example will inspire others in a similar situation.

The love of drag racing was enough inspiration for Larsen to follow through on Epler's directive. He had a choice. He could get help -- or follow the road littered with broken dreams and forever be divorced from his first love - tuning a nitro car. Both Epler and Larsen believed unless something changed, he'd be dead in six months anyway.

“I realized if I didn’t stop I wouldn’t be able to race anymore,” said Larsen. “I realized it wasn’t what I do, it’s what I am. I have one non-drag racing friend, period. It’s because I’ve done this for so long and we travel with the circus from town to town to town with the same group of individuals. When it dawned on me, I could no longer do this, that’s when I straightened out. That was rock bottom for me.

“I’m fortunate that I didn’t make myself financially broke. I didn’t drink or steal … do illegal things, just the fear of not being able to participate in drag racing scared me into it. Once the opportunity presented itself for rehab, there was no thinking about it. There was no hemming and hawing. I went in with the attitude that whatever it took, I was going to fix this.”

Larsen celebrated 20 years of sobriety with a small circle of friends in Pomona last February. During the party thrown in his honor, and the ensuing celebration, the special circle of friends presented him with a plaque honoring his accomplishment. They were sure to ask Larsen for guidance in engraving the keepsake.

He simply wanted his friends’ names on there.

“People doing that for me,” Larsen said, fighting tears. “It came as a complete surprise. That was a crowning moment in my life. 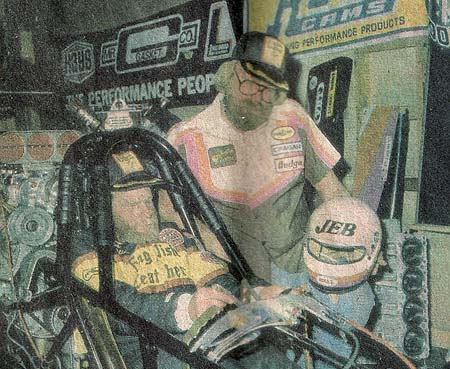 “Back then [pre-sober days] I lied to myself. Now I no longer lie. I’m a wealthy man but I don’t have a lot of money. I don’t want the million dollar home. I love where I live. I love what I do for a living. I have nothing to complain about.”

And during the gathering, Larsen also celebrated another birthday, one he proudly shares with his best friend, fellow tuner Brian Corradi, who quit smoking years ago at the urging of Larsen. It was former team owner Scott Griffin who had inspired Larsen years earlier to kick the habit.

Today's drag racing features a level of professionalism not always recognized in the 1970s. However, the common denominator amongst the top name crewmen, who did party hard, was they didn't mix their vices when wrenching cars. After the event, all bets were off.

“I don’t know of anyone who worked on cars high,” Larsen related. “During my time on the race car, I never got high while I was working. I just couldn’t wait to get done so I could get high.”

For Larsen, the NHRA’s current drug testing policy pleases him if only to get those who are in trouble the help they need. He can’t help but wonder if the present policy had been in place decades ago, and testing all members of the teams, if he might have gotten help earlier.

“I think all of us who have gone through this understand you can’t do the other stuff and be impaired,” Larsen said. “I’m pleased for the NHRA to do this and they need to do it properly. It needs to be done fairly. With some exceptions, I think they have really done a good job with it. In all of motorsports we need to do this to let the rest of the world know we are drug and alcohol free.”

Larsen leads a slower pace than he did in his prime. He helps longtime friends Bobby and Dom Lagana all the while contributing to the R2B2 Motorsports nitro operation.

It was R2B2’s owner Roger Burgess, who helped fill the final puzzle piece to Larsen’s recovery – getting his physical person into dietary rehab.

“Roger Burgess sent me to the Mayo Clinic where I underwent a key-man physical and came out extremely healthy,” Larsen revealed. “Unfortunately I weighed 360 pounds. I talked to a nutritionist and began eating healthy.”

Larsen has already lost 91 pounds and remains committed to getting down to 240. There’s no timetable to reach the goal. He’ll get there when he gets there.

To those who seek an escape from the bondage or drugs and alcohol, he’s more than willing to offer advice.

“People are different,” Larsen said. “In my case, when I was bummed out, I’d drink and then I’d be happy. If I was happy, I’d drink and be happier. We assimilate alcohol differently. A normal person gets bummed out and they’re drunk. If they’re happy and they drink, it doesn’t affect their emotions. There’s physiological reasons why it happens.

“You go to the person and ask them how it is working for them. What is an addict or alcoholic? [It's] someone whose drug and alcohol use causes problems in their life. That’s pretty simple. When I see someone with a problem, I will counsel them only when they are sober. You can’t counsel someone when they are drinking.” 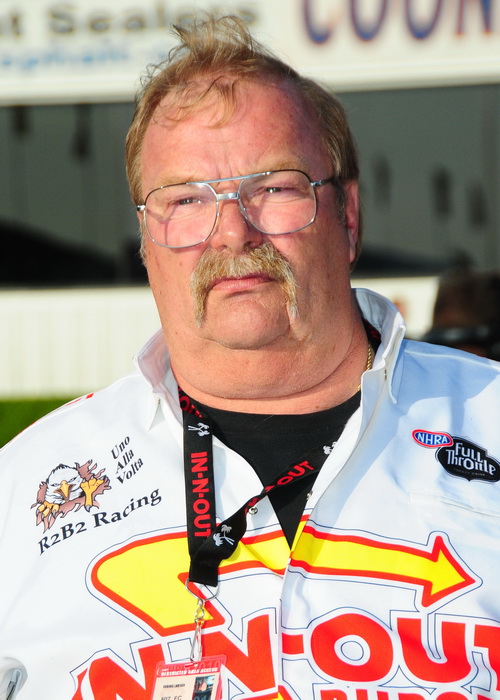 Physically Larsen already realizes the advantages to leading a healthier lifestyle if only through what he’s able to accomplish in the pits. Looking back he has regrets of what addictions cost him.

“It cost me time,” Larsen laments. “I didn’t steal money from my family but I did steal time. I didn’t go around them because I was high. The biggest thing that bothered me was those who I spent time with were those who I shared abuses with and that’s all we had in common. We have nothing to do with one another.

“In reality when I was working for people who didn’t do it, I just didn’t have my head on right and do the job I was capable of. I didn’t get high and blow things up. I just wasn’t as good of a person as I could have been. You might find people who don’t like me, but you won’t find one who says I’m not an honest person.”

“For the first 44 years of my life, I wasn’t much of a catch,” said Larsen. “After I got sober, I reverted to being shy. I’m 64 years old with no children and I realize that I am basically going to finish my life alone. It is a regret, but had I have gotten married while I went through that, it probably wouldn’t have lasted anyway. You can’t regret what you can’t change. Most of the people I did wrong I made amends with.”

“Mankind in general is resilient. You have to not try to convince yourself you don’t have a problem. Just fix it. When I was younger I’d look at a mechanical problem and know how to solve it. As I got towards the end of my addiction, I became confused. Six months into my sobriety, I was no longer confused. I also worried if I was sober, I couldn’t make it in social situations. Nothing could be further from the truth. If you were an a-hole before you became a drunk – you will be a drunk a—hole. If you were a good person before, you will be one when you walk away.”

And because of this, Larsen walks proudly.