A SMALLER HAGAN IS A BIGGER DRIVER

Matt Hagan is banking on being less of a man making him more of a competitive driver. 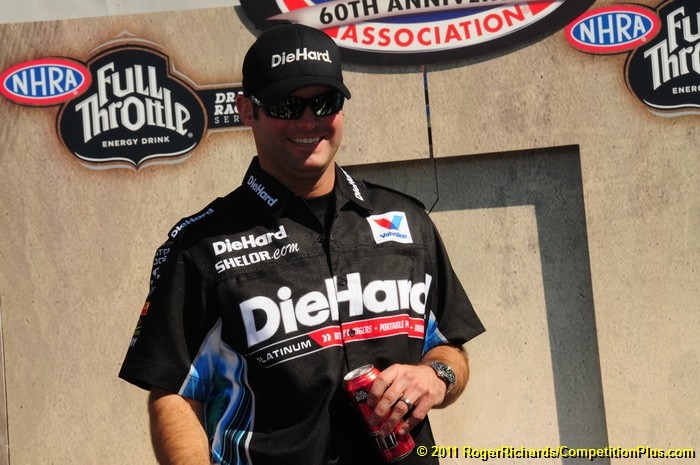 Hagan has shed over 40 pounds since last season by religiously adhering to a rigorous workout regimen. He’ll readily admit a change was necessary, if only to shake off last season’s stinging championship loss.

Matt Hagan is banking on being less of a man making him more of a competitive driver.

Hagan has shed over 40 pounds since last season by religiously adhering to a rigorous workout regimen. He’ll readily admit a change was necessary, if only to shake off last season’s stinging championship loss.

“It’s been a long offseason for us after having that humbling experience at the end of the year; it’s really put a drive in me to do everything I can,” confirmed Hagan. “These Funny Cars are unpredictable and you never know what’s going to happen but as far as the driving side of things, I’m ready to go. It’s Pomona and the start of a brand new year and I’m excited for it to be here.”

Hagan feels better than ever and even though he’s down in weight, his strength level is higher than it was when he played the demanding role of defensive tackle as a standout high school football player.

“In the mornings I bounce up and hit play on the P90X video and I’m good to go,” Hagan explained. “I think it helps your mental game as well. Anytime you’re going to be physically fit you’re going to be mentally fit as well. Hopefully it will carry over with my lights and my concentration in the race car. I’m really, really excited and I can’t even explain the burning that I have in my gut to get out there and get this thing done. I’m on cloud nine right now.”

His workout routine can be every bit as demanding as a ride in his Diehard Funny Car in the rare occurrence it loses traction. 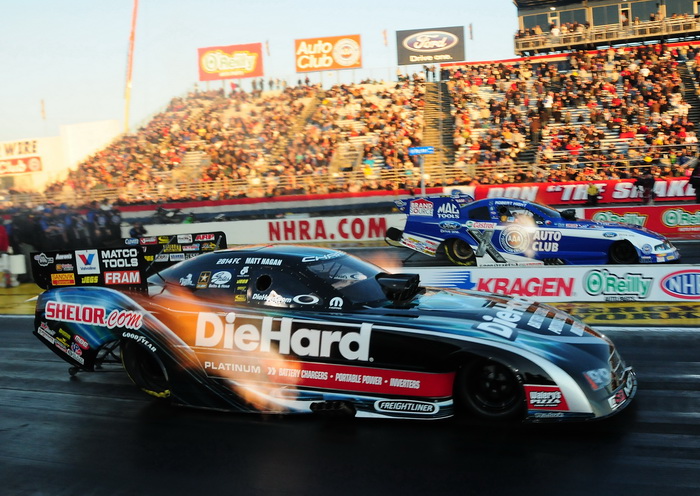 ABOUT THE POMONA FINAL - After producing the low elapsed time of each elimination round, Matt Hagan stumbled when it mattered the most. This is a stumble the headstrong Hagan cannot stomach.

"I'm proud of this team and we're happy with the way the car ran, but you have to win when you get to the finals," said Hagan, last season's runner up in the NHRA Funny Car championship. "I won't be satisfied until we're number one."

“It’s about an hour and a half long,” Hagan said of the workout. “It’s about 30 minutes a day and it’s all about muscle confusion. So your body is guessing and it never gets comfortable doing the same thing. You’re growing and working hard, anyone who has ever done p90x knows what I’m talking about. The first time I ever did it I lost my cookies right there in the floor. I had to get it together and push myself to get through the tape. Now it’s just something that I have to just get up and do. Anytime you just get back into the mode of working out and doing that stuff you’re going to feel better about everything.”

Not only has he changed his eating and workout habits, Hagan has also made adjustments to his driving style.

“We’ve talked about a few things with some people here and there and I feel very comfortable in the car enough to change things up,” confirmed Hagan. “We’re looking at some of that stuff and maybe playing around in qualifying and seeing how it goes. I’ve been talking to my teammates about some stuff I can do to maybe keep the clutch cool. We’ll see how it goes. I’m very comfortable and confident in the car and I’m going to go out there and have some fun with it.”

Hagan believes he’s more mentally aware of what the car is telling him during a run.

“I was catching the smoke and I wasn’t losing a blower off of it,” he explained. “I was tickled to death about that because last year whenever the car would smoke it would snap the blower of the thing. It’s just something that happens. But I think that being physically focused helps the all around package but we’ll see.

Confidence has a way of making a smaller man seem larger.