AN INTERVIEW WITH DON SCHUMACHER 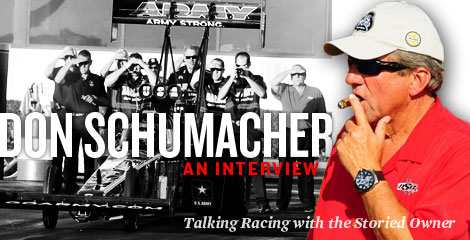 The veteran team owner carried six nitro teams into battle during the 2010 with all six qualifying for the NHRA’s Countdown to 1 playoff system. Two of those cars finished within striking distance of world championships.

Equally impressive, Schumacher has managed to maintain major sponsorships and create new opportunities for marketing opportunities in the midst of a still challenging economic environment.

Attitude’s CompetitionPlus.com caught up with Schumacher on Thursday afternoon to discuss the latest news with his DSR operation as well as an insight into how he views drag racing. The veteran team owner carried six nitro teams into battle during the 2010 with all six qualifying for the NHRA’s Countdown to 1 playoff system. Two of those cars finished within striking distance of world championships.

Equally impressive, Schumacher has managed to maintain major sponsorships and create new opportunities for marketing opportunities in the midst of a still challenging economic environment.

Attitude’s CompetitionPlus.com caught up with Schumacher on Thursday afternoon to discuss the latest news with his DSR operation as well as an insight into how he views drag racing.


CP - ALL SIX OF YOUR NITRO TEAMS QUALIFIED FOR THE NHRA’S COUNTDOWN TO 1 CHAMPIONSHIP PHASE, THAT’S AN IMPRESSIVE FEAT. WHAT WOULD YOU SAY WAS THE LARGEST CHALLENGE YOUR TEAMS FACED THIS SEASON?

CP - YOU HAD MULTIPLE TEAMS IN THE RUNNING FOR CHAMPIONSHIPS THIS SEASON AND FINISHED SECOND IN BOTH CLASSES, WOULD YOU SAY THIS WAS A SEASON OF MISSED OPPORTUNITIES?

DS - Without a doubt. We certainly strive to win the world championship. To lose to Larry Dixon and John Force was certainly a disappointment in my operation. But we will rise to the occasion in 2011, we certainly have the talent, the ability and the people to get the job done and we certainly look to get it done in 2011.

BB - YOU ARE OBVIOUSLY, A VERY HANDS-ON OWNER. ARE THERE TIMES WHEN YOU REGRET TAKING THIS APPROACH WITH YOU TEAM?

DS - No, I don’t regret what I do in the sport at all. I don’t regret what I do with my teams. We strive for winning the world championship every year; we were in the hunt up until the last race of the year in both categories. We just didn’t accomplish it and I do enjoy being hands on, [and] involved with what’s going on with my teams at all times.

BB - THERE HAVE BEEN QUITE A FEW CHANGES WITH THE NAPA CAR SINCE THE START OF THE SEASON. WITH MCCULLOCH APPARENTLY RETIRED, MEDLEN REASSIGNED, HOW CLOSE ARE YOU TO MAKING A DECISION ON A NEW TUNER IN 2011?

DS - We are working real hard in the direction of getting everything sorted out and in place so that team will perform at the highest level possible. We are certainly all disappointed in what we did last year and we’re working hard at changing that.

BB - IS DRAG RACING STILL FUN FOR YOU?

DS - Some days it’s fun and some days it sure isn’t. I not only invest my time into this sport but also invest a lot of money in it. Then there’s the fact that I put a lot of my heart and soul in it.

CP – DO YOU HAVE MORE FUN AS A TEAM OWNER THAN YOU DID AS A DRIVER?

DS - If I didn’t have fun and enjoy what I was doing in NHRA today or back when I was a driver, I would quit today. I enjoy what I do in this sport. I enjoy everything I do everyday otherwise I wouldn’t do it. The scale of fun as driving one of these cars back in the 60s and the 70s versus being a team owner today, it is so different today with the major corporations and the financial impact of running one of these cars today versus the 60’s and the 70’s there’s really no way to compare the two.

CP - YOU WERE ONE OF THE LEADING DRAG RACERS IN THE 1970S. YOU WALKED AWAY WHILE AT THE TOP OF THE GAME, WHY?

DS - I had a family that I really needed to pay attention to and be with. I was pretty worn out; in 1973 I slept at home less than ten nights out of the whole year. I was racing cars in the United States as well as overseas in Europe. I was very busy from doing all of that and I was just concerned with where the sport was at and where it was going and where my own life was going and where my father’s company, Schumacher Electric, was going. It was just a time for me to step back and look at everything and try to make a right decision. In doing what I did as far as stepping away from the sport in 1974 and stepping into Schumacher Electric with where we are today it was definitely the right decision. CP – HAVE YOU THOUGHT ABOUT AN EXIT STRATEGY FROM DRAG RACING OR PLANS TO CONTINUE ON DSR AFTER YOU RETIRE?

DS - I look at the plan to continue DSR when I retire, which I have no plans to do so any time soon, but when the day comes if I ever take a step back from what I do on a day to day basis, I have considered what I would do and what’s the best for DSR and its sponsors.  I have a son who is very active in the sport. I have a daughter, Megan, that’s in college and loves the sport. I certainly don’t look to exit the sport and have DSR go away.

As a businessman, you always have to consider future succession.

BB - AFTER TREADING SOME REALLY ROUGH WATERS ECONOMICALLY, HAS THE HORIZON FOR DRAG RACING IMPROVED?

DS - I think drag racing survived and continued on stronger than any of the other motorsports from what I see and what I’m aware of. I see the future of drag racing being even better but the economy really hasn’t turned around for the better in NHRA drag racing and sponsorships. It’s still a tough environment out there, a very difficult business environment. I’m blessed with the sponsors I have and it’s time to stay straight and keep things going in one direction to try and continue to improve things year after year and that’s all you can do today. There really isn’t the early 2000’s excess of marketing and advertising money out there so it’s a tough environment right now.