A DAY ON THE FARM WITH RON CAPPS 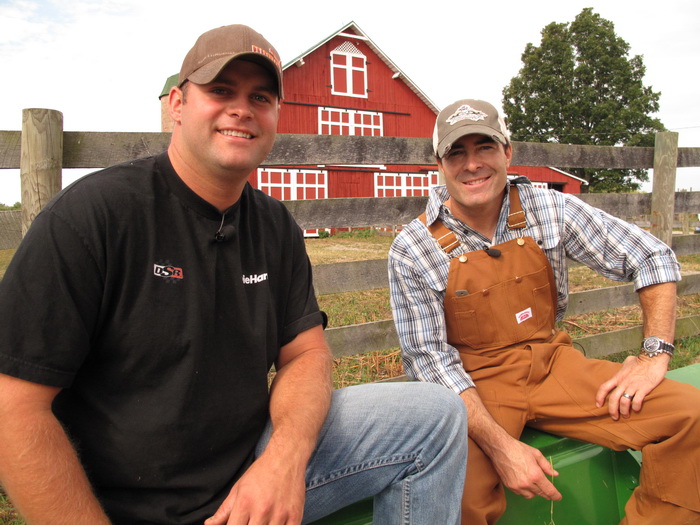 Capps exited his Southwestern Virginia hotel on a Thursday morning decked out in his best “farmer” attire. Matt Ilas, with ESPN, along to film the adventure was floored.

“The best part was, I landed on Wednesday night, ran down to a Wal-Mart looking for some overalls. I found these ugly brown farmer looking overalls and a wrangler shirt, which I pictured Matt wearing on his farm, and they actually looked good together. I came bee-bopping down the stairs and the ESPN guy about fell over backwards. I got dressed for the part. I was serious. When I first talked to Matt about it, I said I really wanted to spend a day on the farm. I wanted to get up at the crack of dawn; no bs.”

Capps exited his Southwestern Virginia hotel on a Thursday morning decked out in his best “farmer” attire. Matt Ilas, with ESPN, along to film the adventure was floored.

“The best part was, I landed on Wednesday night, ran down to a Wal-Mart looking for some overalls. I found these ugly brown farmer looking overalls and a wrangler shirt, which I pictured Matt wearing on his farm, and they actually looked good together. I came bee-bopping down the stairs and the ESPN guy about fell over backwards. I got dressed for the part. I was serious. When I first talked to Matt about it, I said I really wanted to spend a day on the farm. I wanted to get up at the crack of dawn; no bs.”

Capps topped of his attire with a tattered Martin Truex Racing ball cap. The driver of the NAPA Auto Parts Dodge Funny Car was ready to do some farming.

His whole attitude towards the adventure was simple, “I'm a farmer.”

Matt Hagan, Capps' teammate at Don Schumacher Racing is the true cattle farmer, but after a day with Capps, Hagan, with a hearty laugh and a huge grin, agreed, “he's a farmer!”

HOW IT ALL STARTED

TIME FOR A CALIFORNIA EXPERIENCE? 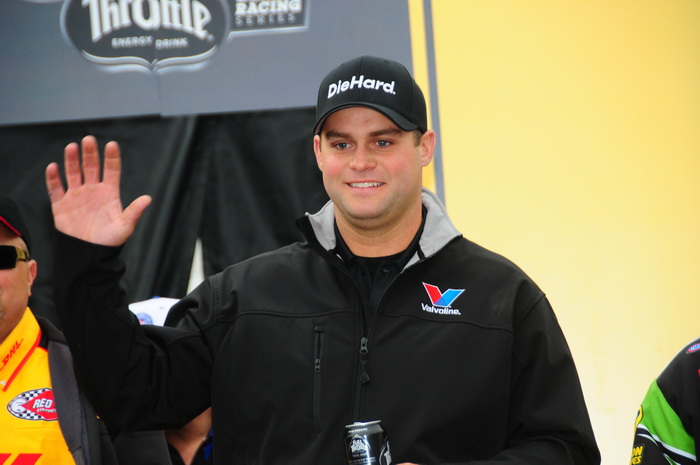 Now that Capps has been elbow-deep in cattle farming, he thinks it would be only fair for Hagan to spend a day with him being a typical California dad.

“It's California; so it's a different deal. No doubt. I run errands, go to the grocery store. I fire up my street rod and go pick up my son at school. He loves being picked up in the hot rod.

“It depends on the day. Hit the gym. Write one of our four blogs. Pick the kids up. Take them to either soccer, karate or cheerleading. (Mr. Mom)

“It would be different for Matt, but a lot of the same.”
Ron Capps is more than just an observer in life. Capps is a lot like Mike Rowe from 'Dirty Jobs,' the host of the popular television show where Rowe goes around the country doing dirty jobs. Capps listened to other people talk about their lives away from racing and thinks to himself, “I would like to do that.” After watching clips of Hagan on his cattle farm, Capps decided he wanted to see what it was like first hand.

“We had talked early on about all these ESPN shows showing Matt away from the track doing his farming, so I joked with him, because I always joke with Matt, and I said, alright, I'm going to come out to your farm one day and I want to be a farmer for a day. I wanna get up at the crack up dawn like farmers do and he said, 'oh no dude, I don't get up until maybe 9 o’clock,' that's how it started.”

What Capps didn't know is all of those around him, Hagan, ESPN and even his publicist Judy Stropus, knew he was in for a rather interesting experience.

THE DAY ON THE FARM

The day started out innocently enough. Hagan was ready to go when Capps arrived. First on the agenda. Feeding the livestock, which are mostly cattle.

“He jumped right on the tractor and he started unrolling some hay and he stabbed the hay and got it out there,” explained Hagan. “You could tell he was having a good time he was checking everything out. “I think the guy he's just a natural when it comes to having a steering wheel in his hands. If it's got a steering wheel he can drive it so he took right to driving the tractor and stuff.”

While Capps was expecting a sweaty morning of moving hay around, he quickly learned something he didn't know about the modern day farmer.

“His tractor, is all enclosed with air conditioning and stereo, those John Deeres are  amazing,” remarked Capps, who admitted Hagan showed him the ropes then let him go on the massive piece of machinery. “He showed me what does what, I got on it, went out and pick up these big hay bails, took it over to these cattle that were waiting for it, dumped it and went back and picked the other one up.”

Capps decided to dive into the role as deep as possible and the resulting footage might be best aired on 'America's Next Best Singer.'

“I was miked up and forgot and started making up my own country song,” said Capps with a chuckle and his best fiddling impression.  “Matt was cracking up.”


OF PREVIOUS ADVENTURES - Informed Tony Stewart is saying he will finally take the plunge and give drag racing a try, Capps remember a time when Stewart talked him into driving a midget.

“I drove his midget at the Chili Bowl,” recalled Capps. “The last year I was there I had a pretty bad flip. I was as high as the fence. It flipped and barrel rolled a bunch of times. It broke my shoulder and I went to the hospital for a concussion.

“(Stewart) was the first one to me. He was standing in turn one so that during the caution he could give me hand signals on where to run on the track. The car flipped, went up against the fence and I guess I went unconscious. I remember he lifted my helmet up, flipped my visor open and was talking to me. He was the first one on the scene. My eyes were going every which way.”

Capps wants to be the first one to look in Stewart's eyes when he completes a full run in Top Fuel dragster.

“He was there for my good flip. So it would be only natural for me to be there for his. I will be at the other end of the track. He is probably one of the best in the world. He will be very good at it. He has the best seat of the pants feel of any driver in the world right now.”
After shuffling around bails of hay, the day turned a bit more serious. Here came the surprise. Capps expected to help with the birthing of some calves. What he didn't know is birthing was never in the plan. In place of the “miracle of birth” was an experience Capps admits ranks up there near the top in his list of lifelong experiences.

“I breed twice a year all my cattle,” explained Hagan. “I have a fall herd and a spring herd. When you pull the bulls out you have to check them for breeding soundness.”

“When they talked about getting the bulls rounded up I thought they were just playing around,” laughed Capps. They weren't kidding.

In order to ensure sounds calves, the bulls must pass muster. Now Capps was going to pass muster on checking to see if the bulls passed muster.

“When the guy showed up he pulled out this big long thing and I wasn't quite sure what it was for, but I had an idea,” said Capps, the memory showing in the expression on his face. “There were two vets there and I saw one shove this thing in the rear of the bull, soon followed by his arm and then they explained to me how they check the bull for his ... virility … and then he handed me a glove that goes up to your shoulder.

Capps may have been in shock during the experience, but he never lost his sense of humor. When one of the bulls showed signs of having troubles, Capps was quick with a solution to the problem.

“I went around the front and started talking to the bull, trying to help him out,” said Capps with a chuckle. “I ended up having the vet go to the truck and get a farming magazine and pull out a picture of a cow, like a centerfold. I was trying to help him along. The funny part is he finally (performed); but he blew snot all over the picture!”

To say Capps had a great day would be an understatement. The look on his face as he cautiously told the story was priceless.

By midday the work on the farm was left to the hands who work under Hagan, while the two Funny Car drivers took off for a little bit of racing fun.

“Did he tell you how good I was on the tractor right away? And, I beat him in a tractor drag race?” Capps asked. Hagan had. “He beat me the very first time but I beat him on the way back.”

After racing the tractors Hagan took his teammate to the family racetrack, Motor Mile Speedway, a famed short track in the Virginia mountains where once the NASCAR Nationwide Series raced.

REFLECTIONS OF THE EXPERIENCE 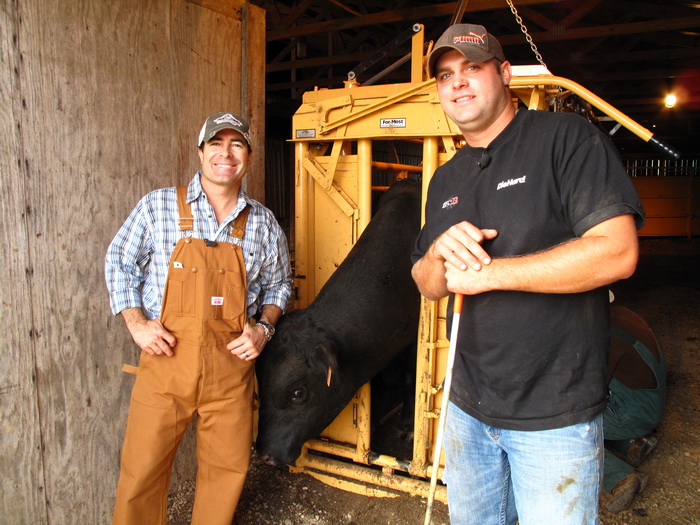 “D***, it was an experience!” exclaimed Capps. “This is stuff you only hear about. It was pretty amazing. He's got a lot of land. It's beautiful. A lot of head of cattle. Six bulls which have very good virility.

On the experience meter, says Capps, “It ranks up there.

“There are certain things I have gotten to do because I am a race car driver -  ride in the (jet) Thunderbird, meet rock stars – but this pretty much tops them. To go to a farm and really work. We were there half a day. I got to do a lot of farming stuff I never though I would get to do. The stuff with the bulls –  the vet put me to work like I was his apprentice. That is something I will never get a chance to do again. A lot of people will never get the chance - 'hands on'. I just happen to be lucky enough to be there and do that.

Capps so enjoyed the experience he is thinking seriously about owning some land of his own where he could play farmer once in a while.

“I would love to go find some land out in California near where I live and farm something,” admitted Capps. “I saw the piece that Matt did on how it really relaxes him and now I know that feeling. It was fun being out there. Cell phones didn't work. There are the guys who work on the farm with him. That is their job, to work the farm with him.

“I would love to have some land and grow grapes on it and make wine. Get somebody who knows how to do it, but I want to play with it, too.”