MIKE GREEN HAS FACED THE CHALLENGES AND SUCCEEDED 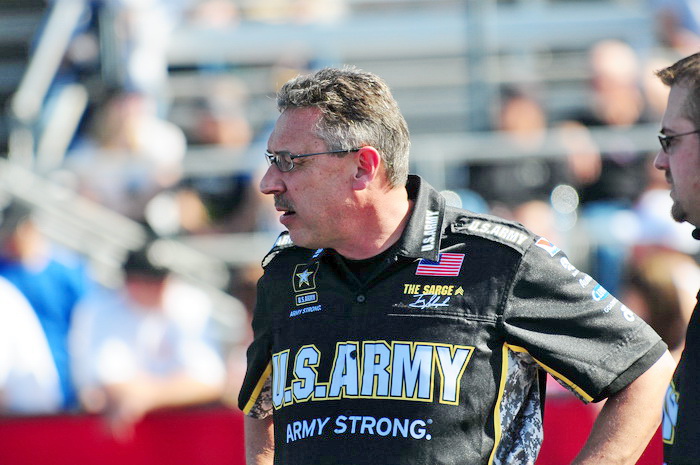 On the surface it all looks the same. A championship-caliber driver. A top of the line sponsor. A seasoned crew chief and several wins to their credit. Under the hood, so to speak, the U.S. Army dragster piloted by Tony Schumacher and tuned by Mike Green is nothing like the team, driver, tuner and car which won the 2008 NHRA Top Fuel championship.

On the surface it all looks the same. A championship-caliber driver. A top of the line sponsor. A seasoned crew chief and several wins to their credit. 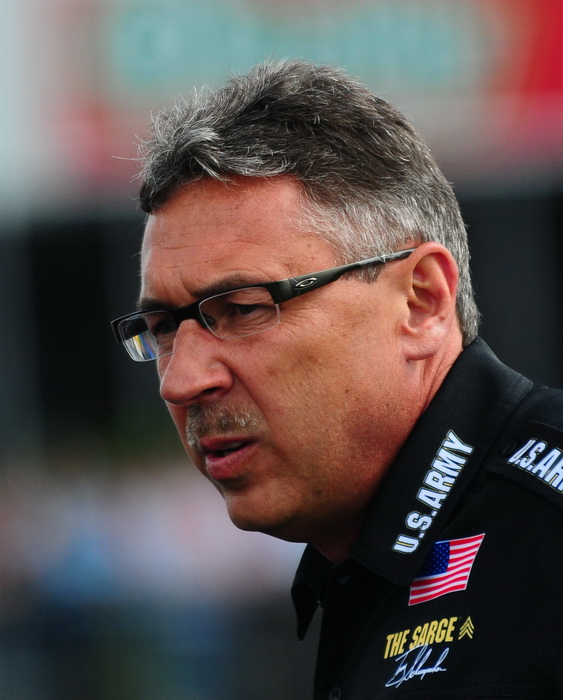 Under the hood, so to speak, the U.S. Army dragster piloted by Tony Schumacher and tuned by Mike Green is nothing like the team, driver, tuner and car which won the 2008 NHRA Top Fuel championship.

The elder Schumacher had but one expectation – win the championship in 2009. It wasn’t a request, it wasn't a suggestion – it was a feat Schumacher knew would be best for the team, the sponsor and the entire organization. It would be, in the words of Schumacher, “what the team and the organization needed.” It was in their “best interests.”

“When Don hired me and said, 'hey you need to put a team together and run the Army car.' When he said that, he goes, 'we've got to win another championship.' That's all he cared about,” said Green during race day prep at Firebird Int'l Raceway earlier this year.

Green did as his boss asked, tuning Schumacher to the 2009 title by a scant two points over Larry Dixon, who coincidentally was driving for the man Green replaced - Alan Johnson.

Johnson had worked a deal for his own team and when he left the only two parts of the 2008 championship he left behind were the driver and the race car.

There were those who cautioned Green about taking the position, warning him if he didn't win the title he would take the blame. In truth, Green wasn't asked, he was told. His was not a choice. He was already part of Schumacher Racing and he would go where he was told to go.

“That is more how it happened,” said Green of how he became Tony Schumacher's new crew chief. “Don is in complete control. He hires and fires the crew chiefs around here. Once you’re in place you can hire your own guys. He came to me and said here's the plan.” 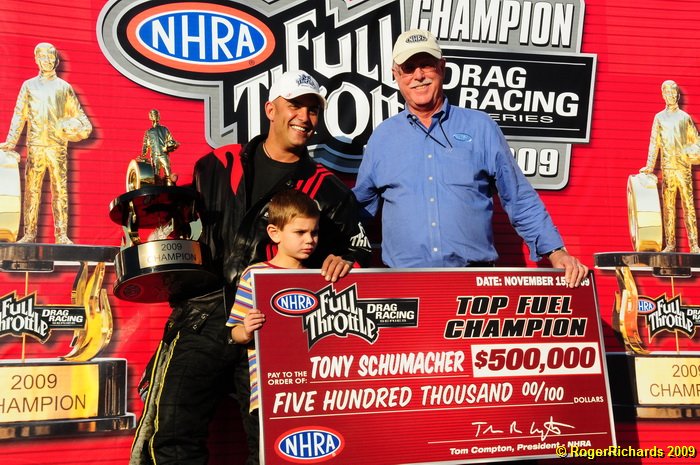 Green wasn't surprised at his appointment. There were indicators Schumacher was leaning his way in conversations where Green made it clear he would be happy staying with Cory McClenathan.

“Everybody said, 'why would you want to do that? They've won five championships in a row. You can't go up. You can only go down.' And, after I thought about it a lot I said to myself, 'how would you turn this down?' It's the winningest team in drag racing in the near history, anywhere. It just seemed like the best opportunity when you really thought about it as a positive instead of a negative.

“It's difficult to win a championship in any circumstance,” said Green, when asked about the challenge he face in 2009. “Obviously, Alan Johnson and Tony working together, they were really successful at it. I got a chance to run Cory's car, as a teammate of Alan, which certainly helped with the transition. We brought a few guys over from our team, but we basically had to assemble a new team, because every one of those guys left.

“That was a pretty good challenge, just getting the team together. But, we had a pretty good baseline. I had been here working for DSR running a top fuel dragster. I think we had a little more of a jumpstart than everybody realized.”

Despite working within the same organization, the first step for Mike Green was to get to know his new driver. Surprisingly, the two had said very little to each other over the years. Once Green and Tony talked, Green knew all he had to do was meld the crew together and keep their minds away from the media.

It didn't take long for the preseason hype to build. While many in the media felt certain Schumacher's streak of five consecutive titles would never reach six, there were those who believed Larry Dixon, driving for Alan Johnson, would either crush Schumacher quickly or at the very least give the reigning champ a serious case of stomach upset. There were predictions of colossal battles and nail biting finishes.

Three races into the 2009 season, obits were being prepared. Schumacher and Green, by all appearances were struggling mightily. Dixon wasn't doing much better, but the focus was clearly on Schumacher, who absolutely refused to bite at any hook aimed at hauling him into some Schumacher/Dixon rivalry.

Green simply ignored it all, keeping his team focus on their data and not on their results.

“The performance of our car was good in testing,” Green said of the start of the year. “It was good in Pomona and Phoenix and Gainesville, we didn't have that good of an outing in Gainesville but still we could see the performance of our car was good enough to win a race. And, the team at that point had already gelled together. They were working really good. Their car services were good. Nobody was making mistakes.

“The media, they were saying (after the first three races) 'he's done. He's never going to win another race.”  And then we went out and won the next two races and everything was okay again.”

If the first three races were indeed critical to the season, Green will tell you it was his driver, Tony Schumacher, who stepped up and led the team. Don Schumacher was the one saying they had to win a championship. Tony Schumacher told his guys and he told Green they were going to win the championship.

“Tony was such a big part of getting us through (the media scrutiny), the team and myself, just saying, 'hey, I know the car is running good. We're good. We're going to win. Don't listen to all that stuff.'

“He just has such a positive attitude. When things aren't going right, he's a big influence on this team. I can see why, Alan tuned the car and Tony drove it, but Tony's attitude through all those championships; I see he definitely helps a team win a championship, not just because of his driving, but because of the way he goes about driving a race car.”

Once the summer gave up it's heat and fall settled in, the season came down to a classic battle between two major organizations – Schumacher Racing and the new Alan Johnson Racing. Schumacher won his sixth consecutive title, beating Dixon by two points at the final race in Pomona.

Green wishes they could have wrapped up the title earlier but in the end, it was the positive attitude and leadership of Tony Schumacher who held the team together when they needed it most, showed his confidence in Green and came through on his promise – they would win the title.

“I told Mike at the start of the season we're just going to have a blast,” said Tony Schumacher. “After the first race I told them we're going to win a championship. I watched all of them get that smile. Just for a moment they thought it was possible.

“It was the end of the year, when we showed up at Pomona I said, 'look around. I told you we were going to be here. We haven't won and we haven't lost. But, this is a great moment. It's not about winning or losing. It's about the fight and we've given them every bit of it.

“We're here because it's a great day and we're going racing. Let's not forget why we are here. Holding that trophy is an amazing feeling, but it's what you do to hold it, that is what makes it an amazing thing.”

Along the way Mike Green and the rest of the U.S. Army dragster crew learned valuable lessons. Most of all they learned to believe in themselves. And, like Green told his wife refused to deny the will of Don Schumacher, no matter how many championship trophies sit on the wall, there is always another mountain to climb, another obstacle to overcome and another pleasure to be treasured in life. There are no downsides to following success; not if you believe.