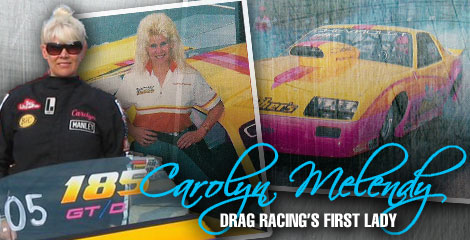 The guts to go racing against some extremely hard core male drivers were Melendy’s, exclusively. 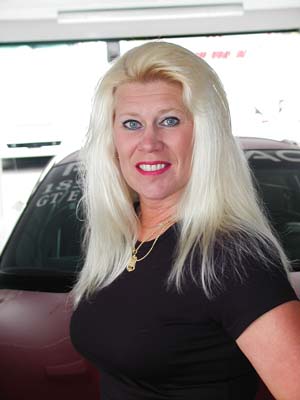 The guts to go racing against some extremely hardcore male drivers were Melendy’s, exclusively.

“You have to remember, this was about twenty years ago and there weren’t any women racing doorslammers that fast,” said Melendy. “No one wanted to line up against me my first time in case I got out of shape.”

Bill Kuhlmann, one of the pioneers of the Pro Modified movement, reluctantly provided Melendy with legitimacy, in a backward sort of manner.

“He stepped up and said according to Melendy, ‘Hey listen, I’ll run her and if she gets out of shape, I’ll already be out on her.”

Then, with a growing smile, Melendy recounts her run against Kuhlmann, “He never got out on me, I was right there with him all the way.”

Melendy entered the Pro Modified class with intentions of racing, not for a place in history. She just wanted to race, gain a measure of exposure to attract sponsors and hold her own against the boys.

Napp saw her value to the fledgling Pro Modified movement.

“I’ll always remember Vinny telling me, ‘You know if you want some recognition, you know we have this new class,” Melendy recalled. “Then the next thing, he gives me a phone number and says to call Robby Vandergriff. I thought I was out of my mind to do that.” 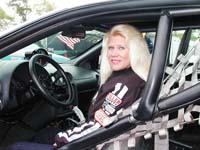 If you think a current Pro Modified might be too tough for Carolyn Melendy to handle, better think again. She’s as tough as they come and a largely untold story, Melendy believes proves the point.

Melendy drifts back in time to a few years ago when a gentleman named Leonard Long had developed a new shifter. At first she was a little on the weak side in her arms, and had to mount the shifter in a manner which provided her greater leverage.

“I needed more leverage than a guy because women don’t have strength in their arms,” Melendy explained. “Holding your hand out we have no strength. I worked out; I was an aerobics instructor for years and a personal trainer. So I thought I was physically fit but I guess my arm just wasn’t. What we did was we added height to the shifter and it worked, it worked for like two years.”

Then there was the incident at last season’s NHRA SuperNationals in Englishtown, NJ, which effectively confirmed she was no longer weak in the arms.

“I had the guy alongside side of me, I left on him, had him beat, and when I went to pull 3rd gear I looked down at my hand, I had the shifter in my hand,” Melendy explained. “After that run everybody came up to me and said ‘boy, you have some muscles.”

“After that (Long) made me my own special shifter.”

While she thought he might have been crazy, the combination she brought to the race track was certifiable.

Melendy’s Camaro was classified as a Super Comp but was so much more. It had a 615-inch big block Chevy underneath the hood, and to shift the gears, she pulled the Lenco levers.

“I had my Pro Stock license,” said Melendy, who added it was Atco Raceway’s Joe Sway who signed her license. “I’ve kept the Pro Stock license all these years hoping maybe somehow somebody will say “hey you want to drive.”

Back in the day, Melendy did her best to ensure those who had vouched for her would never question the choice. Her team, although sporting modest sponsorship from Mothers Performance Center, was overwhelmed by the larger, better financed teams.

The overwhelming odds didn’t hold her back from her place in history, notably in becoming the first female doorslammer pilot to win a round in competition. She won the round and also eclipsed the 200 miles per hour barrier, a first for a female driver.

And the unfortunate victim was…?

“Scotty Cannon,” said Melendy with a smile. “I had a borrowed clutch.  I was borrowing clutches in the very beginning and I was running a national event at Bristol and Scotty gave me one of his clutches. He was so great; he was the only guy that would help me at that time to get the car down the track. He loaned me his clutch and unfortunately for him he had to run me first round. I beat him, I don’t know what the E.T. was but I know I went 205.22 and I beat him first round. Scotty met me down Top end and he says to me “I want my clutch back.”

Melendy said Cannon used to kid her in those days, alluding to her gender being the same as his. At one point he even asked her to turn around so he could look at her backside after she exited the car.

“He asked me to lean over my car,” remembered Melendy with a laugh. “I wasn't sure what was up, but I did it. Scotty then said, 'Yep, I knew it.' I asked him 'What?” and he replied with his own laugh, 'I knew you had a set of balls.'”

Melendy didn't for once consider the remarks sexist. Cannon was too quick to help her whenever he could and together they shared a mutual respect.

“The car I ran was built for 180 mph not 205 mph,” Melendy explained. “The body started flexing and at the time Ronnie Sox and Scotty Cannon, were already running 6.80s and I was running 6.90s, that was the hard part. I had to make a decision on what I wanted to do. I kind of just let the car sit and got out of it for a little bit because I knew that I couldn’t be competitive anymore.”

“That’s what happened. It was who ever had the most money; those were the guys that went fast. I just had my little sponsorships and crew and it was all out-of-pocket. Everyone told us to run Top Sportsman but we never ventured into that either.”

Today Melendy races a GT-classed car within Super Stock eliminator, and for her, this is enough of a fix to satisfy her drag racing addiction. She’ll admit from time to time, when talk comes up of female drag racing pioneers, when her name is left off – she takes it personal.

“Always, it hurts me,” Melendy admitted. “It hurts me so bad sometimes I could cry. You know the only reason my name is off the list is because I never won anything.” 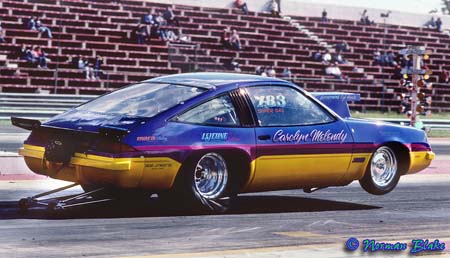 Melendy formerly showcased her skills by racing and winning in Super Gas, while pulling the Lenco levers.

Given the chance to further establish her place in drag racing history, Melendy would give it everything she has.

“I would do it in a heartbeat,” Melendy exclaimed. “If somebody knocked on my door, I’m telling you, I would go back.”