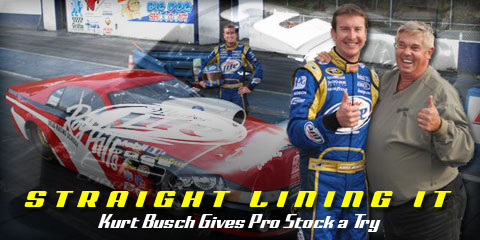 Anderson, the three-time NHRA Pro Stock champion, approached Busch on opening night at zMax Dragway in 2007 about making a few runs down the quarter-mile in Busch's Dodge Viper.

Some may call it professional racer courtesy but Busch, driver of the No. 2 Dodge Charger on the NASCAR Sprint Cup series, calls it enticement.

That night the driver who makes a living racing in circles became highly interested in straight line racing. 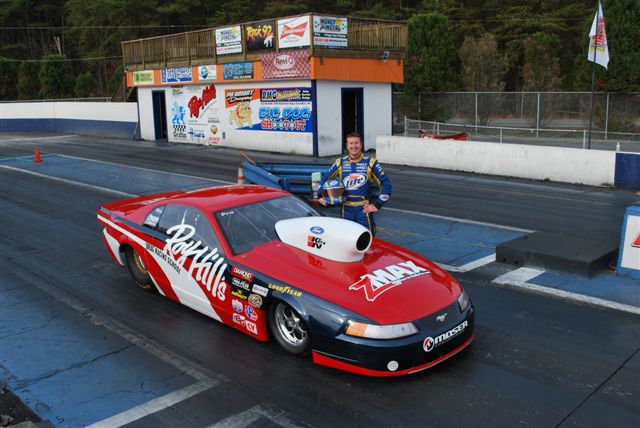 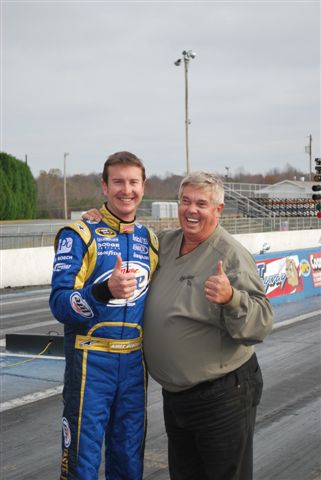 It's a lot of fun working with Roy. If you are a new guy trying to do something special and go out there and drag race – Roy Hill is the guy.- NASCAR racer Kurt Busch on drag racing school instructor Roy Hill.
Anderson, the three-time NHRA Pro Stock champion, approached Busch on opening night at zMax Dragway in 2007 about making a few runs down the quarter-mile in Busch's Dodge Viper.

Some may call it professional racer courtesy but Busch, driver of the No. 2 Dodge Charger on the NASCAR Sprint Cup series, calls it enticement.

That night the driver who makes a living racing in circles became highly interested in straight line racing.

Now, after some serious investment in time, Busch is very close to the time when Anderson will have to hand over the keys to his 1,400-horse, KB Racing Pontiac GXP Pro Stocker.

With the help of drag racing school instructor Roy Hill, Busch has spent more than a few days at Piedmont Dragway located outside of Greensboro, NC, becoming acclimated with high-horsepower drag racing. In all, Busch has worked with Hill on three different occasions progressing towards his goal of being able to drive a professional race car on the drag strip.

Busch caught the bug talking to Anderson and other drivers in drag racing but it wasn't until his wife gifted him with a round of learning at Roy Hill's driving school got a first hand taste of what it's like to belt in behind something other than a stock car.

“Just the thrill and experience of doing something different is what intrigued me,” explained Busch.

“It unbelievable,” he said, of his initial eighth-mile passes. “The challenges that a drag race car presents you are much different then what going around in circles for a NASCAR does. Just the thrill and experience of doing something different is what intrigued me.”

Hill, from Sophia, NC, admitted while he respected Busch’s racing credentials, he wanted to instruct him on proper procedure. The goal wasn’t as much to hone Busch into being a great drag racer as much as it was to ensure that he was a safe one. Hill was confident that Busch’s natural talent would shine through. 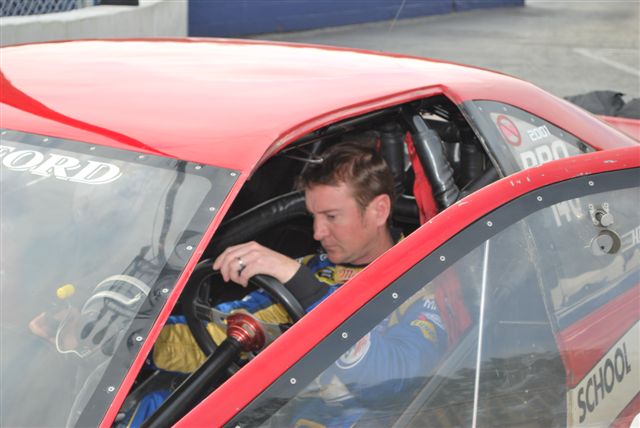 The hardest thing to teach an oval racer is to go full throttle and all that is holding you back is this little button called a line lock."
If anyone knows how volatile a drag racing car can be, Hill does and that’s why he carries a drill instructor towards his students. He didn’t plan to pamper Busch because of his status in the racing community.

“Well, I don't change for nobody, but I am a whole lot easier than I use to be,” said Hill, pausing to laugh.

Busch welcomed Hill’s admonishment as well as the insightful instruction.

“I love the drill sergeant attitude, the way that he jumps right on you if you make a mistake,” Busch admitted. “If you are doing something wrong he's direct, he's blunt, he's honest. Those words have been used to describe me, as who I am. It's a lot of fun working with Roy. If you are a new guy trying to do something special and go out there and drag race – Roy Hill is the guy.”

Just as drag racers, who have tried oval track racing, have learned stock car racing is more than just racing in circles, Busch learned that there’s more to drag racing than just mashing the gas and racing a straight line. The differing cars are complex and equally demanding of the driver.

Busch has no qualms admitting the first time he launched, the torque from the launch knocked his feet from the throttle initially and when he got back on the throttle, he forgot to perform a common routine to all drag racers. 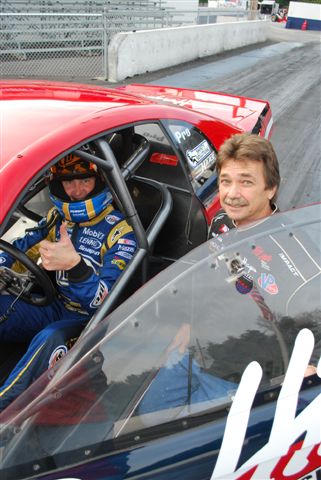 Mike Bell, former IHRA Pro Stock champion, was instrumental in Busch's Pro Stock training.
Hill pointed out that Busch is not the first one of his students to make that mistake, nor will he be the last. The instructor beams when he points out that Busch didn’t make the same mistake twice.

“I am telling you that boy adapted,” Hill said. “After the first day in the Pro Stock car, he had a little problem but after that he dropped the clutch and jerked it into second gear also the first day. We had to get around things. It's what normal people have problems with, whether it's a person coming out of a sportsman car that's run 6.80's at 200 mph. They come in here and they are not used to a clutch, shifting manually.”

Busch’s times were enough to impress the four-decade veteran Hill.

“We're going to be going to the zMax track and get him his NHRA license,” Hill confirmed. “I think the last three runs he made were within three hundredths and all we did was give him a little more rpms to shift by. We worked on the starting line. We had consistent 1.09's then we went to 1.07's and then 1.05 sixty-foots. Then he got into shifting. Once I had me a driver I could start trying things.”

For Busch, the best part of the drag racing challenge is the mental aspect of driving. Oval track presents a certain level of demand, but straight line racing, presents an entirely different set of intrinsic challenges.

“The best part about drag racing is the mental aspect. It is very easy to beat yourself and that is what you have to focus on – working your own car into the racetrack and hitting your marks each time. In oval racing you have the other competitors out there running side by side with you. In drag racing, it's all on your own.”

Busch admits while he made great strides in his “schooling”, he’s got a bit more to learn.

“I wouldn't even say I have Pro Stock under my belt. Roy Hill is going to take me to the next step to where I feel more confident and comfortable.”

And once that challenge is complete, Busch wouldn’t mind a shot at nitro.

Busch has been in the nitro pits as a guest of former Miller teammate Don Prudhomme. The NASCAR driver admitted the drag racing icon has offered him the opportunity to launch one of his nitro-burning race cars.

“I've got a couple of invites - Don “The Snake” Prudhomme to do what he called a squirt in one of his nitro cars and with John Force. [Force] says it’s so easy even a girl can do it.”

Busch welcomes the 8,000-horsepower challenge. The engine in his Sprint Cup ride is about one-tenth as powerful.

Hill believes Busch can pull off a run in a nitro car if the opportunity presents itself.

“It's insane,” said Busch of the volatility of a nitro-burning Top Fuel dragster. “That is the word for it. You stand there and the car drives away from you so fast. It is walking on top of the racetrack, five feet left, five feet right, and they already pull the chute because they just did the track in 3.88 seconds, in the 1000 foot mark. It's amazing watching those guys. I have the utmost respect.”

While he’s the latest NASCAR driver to give drag racing, Busch doesn’t believe he’ll be the last.

“Especially with zMax Dragway being built in the Charlotte area where most of NASCAR guys live it’s going to be a bug that catches,” he added. “If anybody knows racing, once it catches you it's in you forever.”