NOTHING BUT POSITIVES FOR HIGHT

It would have been easy for second-year NHRA competitor Robert Hight to be disappointed about the recently completed POWERade Series season.

But rather than pout about coming up short in his quest to score his first Funny Car title, Hight chose to look at the positive. And when you look at what Hight accomplished during his sophomore campaign, he had reason to be smiling.

Hight, driving one of three Ford Mustangs for his father-in-law and NHRA icon John Force, certainly had a season to remember after scoring three wins in six final rounds and finishing second only to Force in the final Funny Car standings. 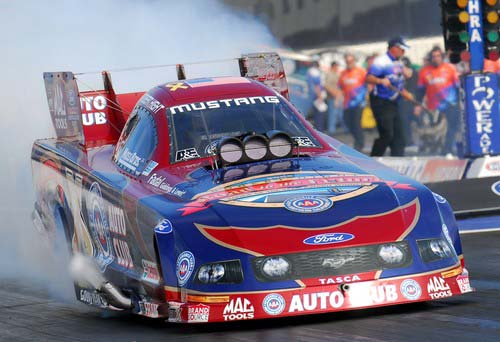 It would have been easy for second-year NHRA competitor Robert Hight to be disappointed about the recently completed POWERade Series season.

But rather than pout about coming up short in his quest to score his first Funny Car title, Hight chose to look at the positive. And when you look at what Hight accomplished during his sophomore campaign, he had reason to be smiling. 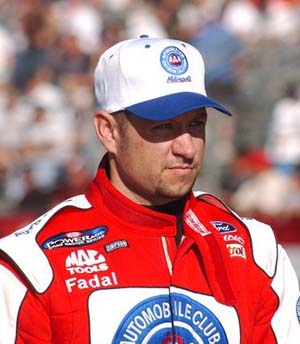 Hight, driving one of three Ford Mustangs for his father-in-law and NHRA icon John Force, certainly had a season to remember after scoring three wins in six final rounds and finishing second only to Force in the final Funny Car standings.

"You can't ask for much more than what we (accomplished), especially this being just my second year in the class," Hight said. "You always want to win the championship, and we were in a position to do that, and when it doesn't work out, you're bummed.

"But when you stand back and look at the whole picture, and look what we accomplished as a team, I have to give it an A-plus year."

It's also been a pretty A-plus career for Hight during his first two seasons driving the Automobile Club of Southern California Funny Car. The northern California native won twice and won the Auto Club Road to the Future Award last season after finishing in the top five in points during his rookie season. He then followed it up with a second-place finish this season in which he also had a class-best nine top qualifier awards and was 35-20 during eliminations.

But there was a time, when the 36-year-old didn't think he would ever get the chance to pilot a nitromethane machine. But eventually fate leaned his way. 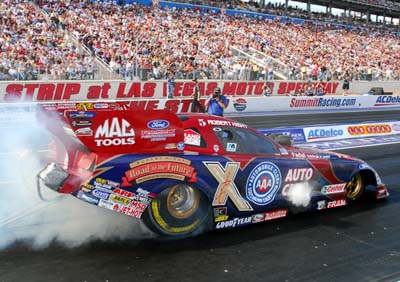 "I had pretty much accepted that I wasn't going to drive," said Hight, who came to John Force Racing as a clutch specialist during the 1995 season. "I faced the facts, and the next best thing was to work on the cars and learn all about them and maybe be a crew chief. That was the approach I took, and finally I showed John how bad I wanted to drive. I still didn't think it would happen, but I showed him I wanted it, and he gave me the opportunity. I'm very fortunate."

That chance came prior to the 2005 season, when he replaced veteran Gary Densham in the Auto Club Ford Mustang. For Force, it was the logical thing to do. He already struck gold the year before when he put former crew member Eric Medlen in the Castrol Syntec Ford Mustang, and the results were more than successful.

Hight responded with a solid rookie season that earned him the Road to the Future Award. He won twice in four final rounds and ran as quick as 4.711 while finishing fifth in the Funny Car standings.

Hight expected even more coming into the 2006 season.

"I believe anytime you drive a Ford Mustang for John Force you have to believe you can win the championship," Hight said. "The people that John has here, you're going to be a threat. I believed we could do it. But you have to get the job done."

And Hight more than earned his money. He opened the season with a win at the season-opening Winternationals and despite struggling somewhat during the middle of the first half of the season, he found his grove and made a strong push over the final eight races.

He went to three consecutive final rounds, winning two, in September and October to pull within 35 points of his father-in-law. But the odds of racing eventually caught up with him as he lost in the second round at Richmond and the opening matchup at Las Vegas. The Las Vegas loss was the most difficult to take because Hight had earned his ninth No. 1 qualifying position of the season only to lose in the first round when he suffered a mechanical failure after the burnout. Force then clinched the title at the Auto Club of Southern California Finals when he beat Ron Capps in the second round and Hight in the semifinals. 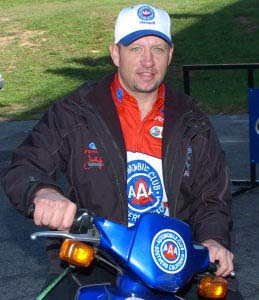 "It was tough, but I'm glad John won," said Hight of his teammate winning his record 14th Funny Car title. "It turned out better this way, than if Capps had won. But yeah, it was tough, because you always look at runs you lost during the year, that was nobody's fault, but you wish you could have back.

"You think, 'Boy, if we had those back, a round win here, a round win there...we really had a chance to win this thing. But you can only look at that stuff so long, you have to move on."

What made this championship chase even more difficult for Hight was that, as the season unfolded, it became apparent that if he was to win his first POWERade Series title, he would have to do it at the expense of his boss, father-in-law and mentor.

"That's pretty tough," Hight said. "I never wish for him, or Eric to lose early (during eliminations), even if it benefits me. I just don't look at it that way. If they are going to lose, I hope I'm the one beating them. I don't want the other guys to beat them.

"It is a tough deal. It's hard to race John too because he's given me this opportunity and you don't have a desire to beat him, like you do the other guys. It's kind of a weird situation, because that's what he wants me to do. He wants me to go out there and do the best I can and beat him."

Hight says it all part of being a member of the John Force Racing family.

"John's made it a family business," Hight said. "We're all one big family here, whether you are a (Force) family member or not. John and Eric Medlen (Castrol Syntec crew chief and driver) are just as much a part of this family as I am, as is (any employee here). John treats everyone the same. We're all part of this family"


can cover 1,320 feet. But But each member has their own personality. Hight, when compared to Force and Medlen, is considered the one who always seems to be under control. He's more reserved than Force or Medlen, who at times often talk quicker than their nitro coupesHight says it's all about balance.

"Dave Densmore, our P.R. guy, jokes that at least I can answer the question," Hight said. "John goes all around and eventually (answers the question), but it takes a while. I'm more reserved and quiet. But it only shows up more because of who you are comparing me to. John is pretty extreme. That's his personality. He's great for the sport. There's only one John Force. It's hard to compare me to him."

Except on the race track, where teamed with crew chief Jimmy Prock, Hight has almost become his father-in-law's equal. And now he's looking to improve on that next season and hopefully improve his standing by one.

"I can't wait for next season," Hight said. "The point system that we will have is different. I'm not saying it's bad, it's just going to be different. I don't think it will change our approach to racing. We're just going to go out there with the same attitude that you can win every race you go to. And we're capable of doing that. The more races we win, the better off we're going to be at the end."