THE IHRA COMMUNITY WEIGHS IN ON THE 2010 RACE FORMAT

track operators and race fans are digesting the news that the IHRA, for the first time since its 1971 debut, will run without qualifying and a traditional eliminations format.

Friday afternoon, the Norwalk, Ohio-based sanctioning body issued a release stating their 2010 format will essentially be based on a Chicago Style format where each professional eliminator will make two runs during a two-day Nitro Jam event and the final pair of the second session each day will represent the final round.

The IHRA events will no longer carry the designation of Nationals and will be limited to a three-hour window to complete the professional portion of the event.

Three days after the IHRA’s announcement of a major format overhaul, their contingent of racers, 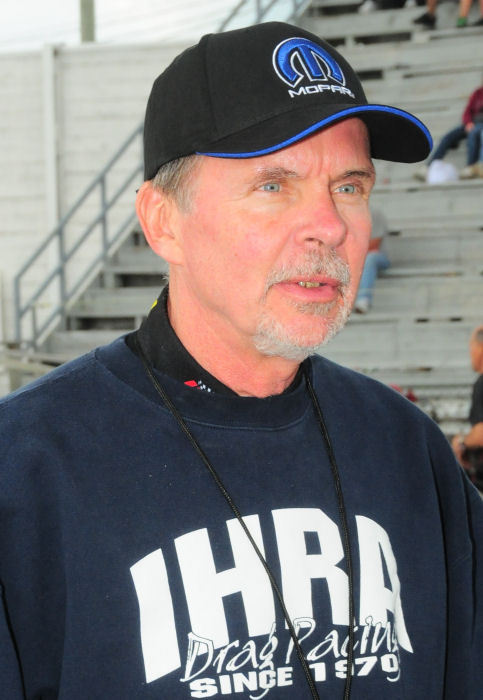 IHRA President Aaron Polburn believes that the traditional drag racing format no longer gets it done for his sanctioning body. On Friday, the IHRA announced sweeping changes to their race format for 2010.
track operators and race fans are digesting the news that the IHRA, for the first time since its 1971 debut, will run without qualifying and a traditional eliminations format.

Friday afternoon, the Norwalk, Ohio-based sanctioning body issued a release stating their 2010 format will essentially be based on a Chicago Style format where each professional eliminator will make two runs during a two-day Nitro Jam event and the final pair of the second session each day will represent the final round.

The IHRA events will no longer carry the designation of Nationals and will be limited to a three-hour window to complete the professional portion of the event.

According to the release, the sportsman competition will remain the same although their championship format was greatly altered for 2009. Sportsman champions are determined through a special “Tournament of Champions” event in which divisional and national event winners are gathered together at the end of the season in a one-race championship.

The complete overhaul of the sanctioning body was something  President Aaron Polburn believed was needed to secure the future of the IHRA.

“More than anything else we have had a history of looking at what is successful and what is not successful. We know that after looking at other forms of entertainment it is critical that we package a program into a three hour window with the right ticket price while still providing a great show,” Polburn said. “If we continued to do the same thing that we were doing we were going to continue to get the same results and those are not results that I am happy with.

“By doing what we are doing I think we can expand our audience, put on a better show in a shorter period of time and work inside of a budget for each of the marketplaces.”

Among the changes to the format will be a series of “designer” events where track operators will pick and choose which classes will run at their events. While the IHRA’s Friday statement didn’t list a core group of classes which will run at all of their events, they pointed out the “heavily favored” classes will be Top Fuel, Nostalgia Funny Cars and Pro Fuel, a gathering of injected-nitro dragsters. 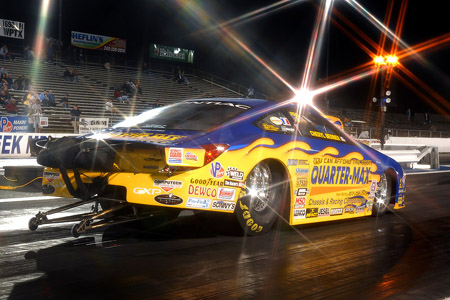 That’s a plan that has some of the dedicated professional doorslammer racers scratching their heads.

John Montecalvo has supported the IHRA for the last 15 seasons as a Pro Stock racer. He’s leading the championship points with one race remaining, and by all indications if he wins the title, he’ll not be able to defend it.

“To me Mountain Motor Pro Stock and Pro Modified are the two classes that originated in IHRA,” said Montecalvo, just moments after reading the IHRA’s Friday afternoon press release. “I like what they are doing as far as bringing in the Nostalgia Funny Cars, Nitro Harleys and Top Fuel, I like all of that.

“But I also think they should stick with their roots and include Pro Mod and Pro Stock. I don’t like eight-car fields. I like 16-car QUALIFIED fields. I like fields where we have to qualify. We’re all in this to compete. That’s the reason we run these classes and it’s because we want to compete. We want to know who’s the fastest and the best driver.”

Montecalvo hasn’t ruled out the possibility that he’ll run at some of the IHRA Pro Stock events, but at this point he’s considering all options beginning with the ADRL, and he hasn’t ruled out the forthcoming American Hot Rod Association [AHRA] if they make a run at competitive professional drag racing.

“We have to have qualifying,” Montecalvo said. “I have presented an idea to Aaron and he’s supposed to get back to me.”

Bruce Litton understands that he has doesn’t have as much to lose with the new format as some of his fellow racers who had their eliminators placed on the “pick and choose” list but understands the objective of the IHRA.

Top Fuel is expected to be the cornerstone of the new IHRA Nitro Jam Series.

“I see what they are trying to do and I see where they are coming from because it is so expensive to run … it’s a little different than a closed field,” said Litton, who added his participation is predicated on the promise that this new format is competitive. “It’s invitation. I am glad it’s competitive. To me competitiveness is entertaining.” 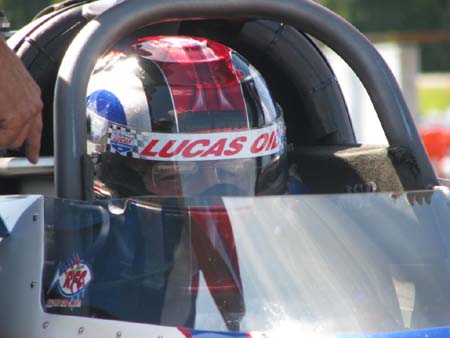 Top Fuel racer Bruce Litton says he doesn't mind the format change as long as it is competitive.
Litton believes the IHRA has always been good about being innovators in drag racing and this move is yet another step in that direction.

“It’s something I think is different and will work for them,” Litton said. “I do understand they want to be unique by picking certain classes to run at certain tracks. I can see where that will work too. I think as long as it remains competitive it will survive.”

Trussell, whose driver Ed Hoover won the first-ever Pro Modified event back in 1990, believes the IHRA won’t make it through what he describes as a “circus” atmosphere. He said Friday’s announcement is nothing less than a betrayal to those who have supported the organization through both the good and bad times.

“They just ruined the IHRA,” said Trussell, whose team hasn’t missed an event in 12 years.

Trussell pointed out that after next weekend’s IHRA World Finals in Rockingham, NC, he’s through with the organization.

“They may get by with this foolishness for one year but after that, they’ll have to fold tent,” Trussell added. “Do they really think Rockingham fans, a town that was built on IHRA racing, won’t know the difference? I think it’s sad that Pro Modified started here in IHRA and it has been pushed aside like it meant nothing. This is the darkest day the IHRA has ever had. There were some things that [Bill] Bader did that I didn’t like. But at least he kept it going. This is just stupidity.

“Maybe they’ll start a monster truck class and have the circus in one place,” Trussell continued. “It would make as much sense as what they’ve done now. What they have done to us that traveled all over supporting them when no one else would is betrayed us. They crapped right on us and that ain’t right. I think the people who started this … Larry Carrier … is just rolling over in his grave. 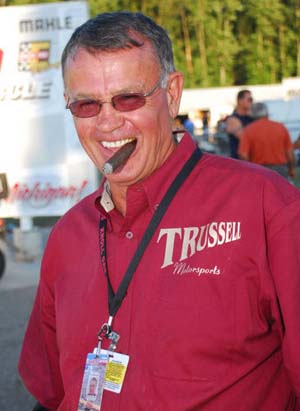 Mark Carrier, whose father Larry Carrier, founded the IHRA was disappointed in the IHRA’s announcement on Friday.

“This whole situation just tears me up,” said Carrier. “I think this makes a mockery of what my father worked so hard to develop with the International Hot Rod Association name. I’ve never met Mr. Feld and to me, it sounds like he’s never run a racing organization. Racing brings out a different breed of fans. You have to figure racers; they’ll spend one million dollars racing for $10,000. We did that because that’s what we did and what we loved it. I don’t think he understands that.

“I wish they would just drop the name IHRA because it’s nothing like it used to be. When my dad owned it, he had a vision of what he wanted it to be. He pretty much gave NHRA a run for their money until R.J. Reynolds pulled out. Bill Bader had it on a right track. I just think now it would be better served calling it something else but IHRA.”

Royce Miller, owner of Maryland International Raceway [MIR] and one of the expected stops on the 2010 IHRA Nitro Jam Series, is concerned about the transition of the IHRA as a competitive professional series into an entertainment venue.

“I understand their reasoning and I have been on the losing end of a settle up,” Miller said. “I understand the economics of what is happening with the IHRA national events.”

Miller said he knew a different format was coming and that the track owners were briefed on the new format individually and not together as a group. Because Miller’s MIR is largely a facility for knowledgeable drag racing spectators, he said he plans to retire the traditional President’s Cup Nationals moniker in favor of Maryland Nitro Jam.

“I don’t want my customers to think it’s the same event we’ve been putting on,” Miller said. “It will likely be the Maryland Nitro Jam. It will be a lesser ticket price to meet the economic times.

“I think it will be a great show for the novice spectator. The purist race spectators will have to take some time to warm up to it. From a novice fan that hears it advertised on the radio and wants to see fast cars and a lot of noise, they’ll be entertained with. For the purist, I just don’t know how they’re going to take it. We’ll develop a new audience. The diehard fans are not going to have a lot of enthusiasm. The average one-to-two race a year fan that doesn’t follow the sport will be entertained.”

And for Miller, he’s prepared to stand by the IHRA in the same fashion that they stood by him last year in trying financial times. Last year’s IHRA President’s Cup Nationals was to be sponsored by Torco Race Fuels.

“When they settled up with me, using the Torco money, knowing full well that they weren’t going to get a dime of it, and they put it in the event as if they expected it to be there,” Miller explained. “I owe them that loyalty. That was 200K that wasn’t there that they put in.”

While some of his drag racing constituents believe the IHRA died on Friday, the former Top Fuel series champion Litton believes the sanctioning body is on its way to recovery.

“I won’t say the IHRA died but it has changed drag racing,” Litton said. “I’ve kept up with the numbers in IHRA and NHRA and with our economic times, it has all been down. I think they [IHRA] are looking for a niche in the market. It’s going to be interesting to see how it works as the year goes on.”