Sometimes the placing of a hat in the ring can yield large dividends.

Funny Car driver Jeff Arend will testify that there couldn’t be a truer statement. After winning the NHRA Midsouth Nationals in Memphis, Tenn., Monday afternoon, he’s counting his blessings that he took that chance.

Arend hand-delivered a trophy to a Kalitta team who had suffered so much in the last year. Winning was his way of paying it forward. 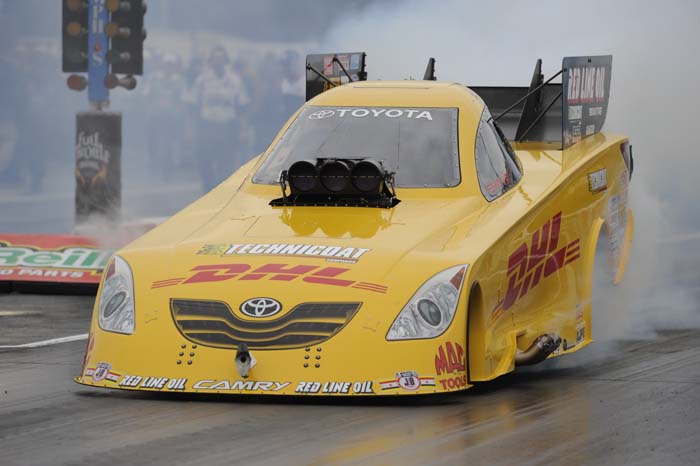 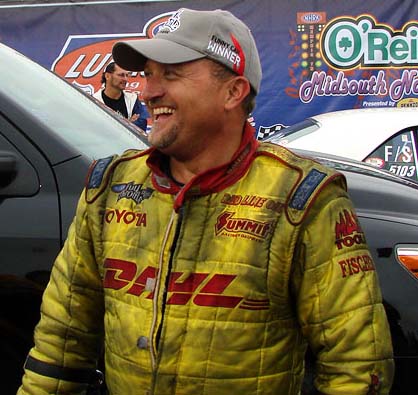 A little over a year after the loss of Scott Kalitta, the Kalitta Motorsports team had a reason to smile. Driver Jeff Arend and the Kalitta team fought a season of hardships and bad luck to win big in Memphis.
Sometimes the placing of a hat in the ring can yield large dividends.

Funny Car driver Jeff Arend will testify that there couldn’t be a truer statement. After winning the NHRA Midsouth Nationals in Memphis, Tenn., Monday afternoon, he’s counting his blessings that he took that chance.

Arend hand-delivered a trophy to a Kalitta team who had suffered so much in the last year. Winning was his way of paying it forward.

Arend had nothing to lose last summer when he offered his name as a candidate to drive the Funny Car formerly piloted by Scott Kalitta, who died in a 2008 drag racing accident in Englishtown, NJ.

Arend had learned through an article on CompetitionPlus.com that Kalitta Motorsports had planned to bring the car back out sometime later that season as both a tribute to the fallen driver and as a part of the healing process for the team.

Arend had been out of driving since former employer Del Worsham had to park his second car for 2008, due to budget constraints. He had some “deals” in the works but nothing really solid for 2009. 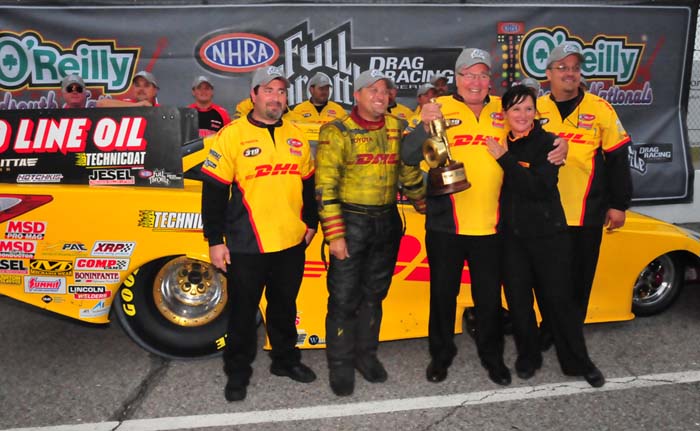 Arend wanted to be respectful of the Kalitta camp, a group he considered friends at and away from the track, but there was the desire to return to competition. However, there was the respect issue and that always outranked his desire to compete.

“When I saw that they were going to come out and race the car again, I sent Jim O [Oberhofer, Team Manager] an email letting him know that I would like to throw my hat in the ring,” said Arend, of the email he sent shortly after the article published on July 9, 2008. “I let them know that I would be honored just to have my name on that list.”

Arend’s email was answered within 20 minutes from Oberhofer letting him know that his name was already at the top of a short list of candidates.

“I didn’t bug them for a while,” he continued. “I knew that they had talked to a few people already.”

The call asking Arend if he’d like to drive came a week later.

“It was something you really couldn’t get excited about,” explained Arend. “If you get a call and it’s to drive a second car, that’s something you can get excited about. The way this came about … you don’t want to get excited but you definitely want to do your best for them and honor Scott’s name. I had confidence in my abilities but I really wanted to go beyond for them after all the team had been through already.” 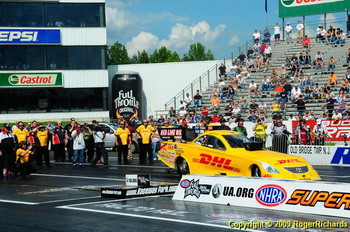 A new chapter for the Kalitta Motorsports Funny Car team began back in June when Arend made a run on Friday at Englishtown in honor of the late Scott Kalitta.
Arend learned quickly the pain still prevalent when he flew to the team’s shop in Ypsilanti, MI, to be fitted for the chassis. It wasn’t hard for Arend to notice the pain lingering from the loss of their driver, who was so much more than just a guy who piloted their 300 mile per hour Funny Car.

“Everyone was super nice but you could tell it was tough for them,” recalled Arend. “We went to a test session and the car was running again. [Making that first run] in Indy was the biggest thing. I didn’t feel any pressure because I knew the car would run and I knew I could drive, and until I got to the finish line and exited the car, I didn’t realize all the emotion that had transpired on the starting line.

“When I got out of the car at the other end, the magnitude of the emotion hit me. I was crying and a lot of others were too.”

Arend made the point clear when he was named successor to Scott Kalitta that his role was not to be a replacement, but a successor. Case in point, for a full year after the tragic accident Arend’s name didn’t appear on the car. Instead Scott’s name remained in the same position it had always been since he returned to Funny Car racing in 2007.

The new chapter for the Kalitta Motorsports Funny car team began earlier this year in Englishtown when Arend made the team’s first pass at the track after Scott’s crash. After that event, Scott’s name was moved to a prominent positioning on the side window while Arend’s name was placed above, where Scott’s name had been.

Putting his name on the car essentially pointed out the team then considered the car to be Arend’s and marked a major moment in the healing process. 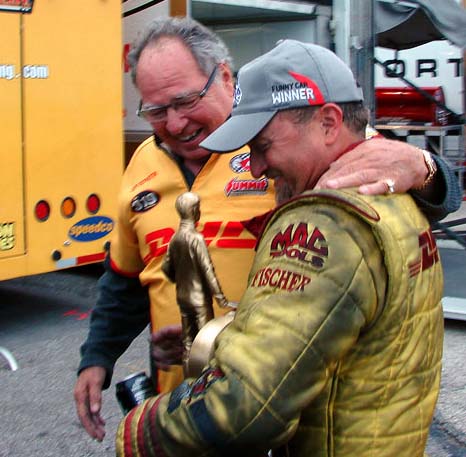 “Winning for Connie was an incredible experience … you know he could have parked this car after the accident and no one would have blamed him. - Jeff Arend on what winning for Connie Kalitta meant to him.
The team epitomized the spirit of champions when the performance on the track statistically didn’t provide the support. Case in point, the team didn’t win a single round of competition until the 16th event of the season, when Arend was declared the winner after Ashley Force Hood's car turned up light at the scales. One race later, he stopped Jerry Toliver in the first round at the NHRA U.S. Nationals in Indianapolis.

By all accounts, Memphis provided no early indication that the delayed event would provide the team with their first win since losing Scott. That indication came after the first round for the 15th qualifier when Arend pulled out the victory in a tire-smoking duel with Jack Beckman.

The subsequent rounds provided a pair of 4.10 elapsed times and a 4.09 in the finals to stop Tony Pedregon.

An elated Arend wasn’t sure which emotions he should exhibit after exiting the car as the winner. He wasn’t really sure if they had pulled off the feat.

“After winning, you didn’t know whether to celebrate or cry … there were mixed emotions for everyone,” Arend said. “You’re all fired up to win and then you ask yourself, ‘did we really win?'”

The team was so excited after the victory that no one left the track until after 11 PM. The final round was staged at 6:20.

“Winning a race was the one thing I wanted to do for this team since the first day I arrived in their shop,” Arend said. “I was disappointed that we hadn’t won earlier but winning the way we did in Memphis, taking out [Jack] Beckman and John Force, who I had never beaten before, and then Ashley Force in a close run … running a 4.0 against Tony. I was so proud of the team.

“Winning for Connie was an incredible experience … you know he could have parked this car after the accident and no one would have blamed him.

“Going from barely winning a round to winning a race is just frigging unbelievable.”

And, that’s the feeling he envisioned when he tossed his hat into the ring last summer.