A CAMPAIGN OF FRUSTRATION FOR MORGAN LUCAS

The Southern California native was a modest 17-22 during eliminations and while he failed to win a race or advance to a final round, his Lucas Oil Dragster did manage five semi-final finishes. But when you consider what he accomplished while competing in Top Alcohol Dragster class from 2002-04 (10 national event victories) and the past two-plus seasons in Top Fuel (a five-time finalist), those numbers didn't quite match up to his expectations. 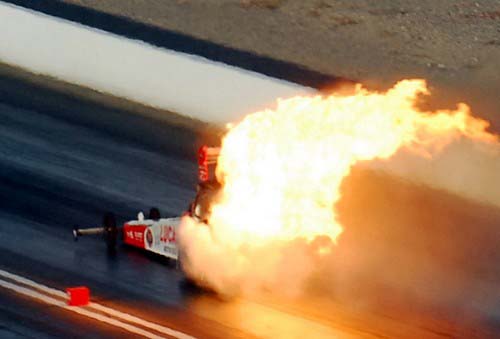 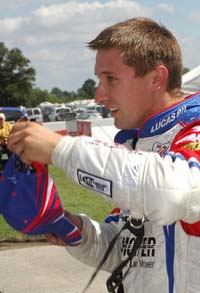 The Southern California native was a modest 17-22 during eliminations and while he failed to win a race or advance to a final round, his Lucas Oil Dragster did manage five semi-final finishes. But when you consider what he accomplished while competing in Top Alcohol Dragster class from 2002-04 (10 national event victories) and the past two-plus seasons in Top Fuel (a five-time finalist), those numbers didn't quite match up to his expectations.

Nobody understood that more than the 23-year-old, who by his own admission didn't have the type of season he was hoping for.

"This last year, I didn't make it to one final round, and that's kind of heart-breaking, especially for me," Lucas said. "There's nothing like at the end of the day (on Sunday) holding the (Wally) in your hand and saying, 'We're No. 1. Today, we were the best.' There's nothing better than that feeling.

"Any sports' star will tell you that. If you play baseball, if you play softball (in a recreational league), you want to be the best and when you win, it's a great feeling for anybody out there. Nobody likes to lose."

And Lucas didn't do much losing during the first portion of his drag racing career. He won two national events in his rookie season in TAD in 2002, four in '03 and four more in '04.

Lucas, who replaced the late Darrell Russell in the Joe Amato-owned dragster, then moved up to Top Fuel during the second half of the '04 season, where his success continued, advancing to two final rounds while earning a 13th-place finish in the point standings despite competing in just final eight events of the season. His star continued to rise last season after advancing to three finals and six semifinals en route to a fifth-place finish in the points standings. And despite starting his own team this season, more of the same was expected. But the team struggled for much of the year and finished a disappointing 11th in points. 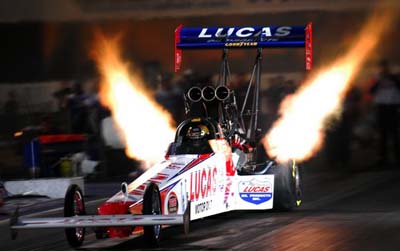 "It's probably the most difficult 1,320 feet I had to go in my life," said Lucas of his first season on his own. "There were so many things I had to learn (as a owner/driver), and there's still some things I need to learn, but I kind of had a crash course in a year. It was kind of like combining four years of college into one...and I think I failed."

The team's main problem proved to be a lack of consistency, which resulted in Lucas advancing no further than the second round in 17 of the 23 national events. The team's record also included six consecutive first-round losses during the middle of the season.

"We fought a lot of consistency, but the bigger problem was just our overall performance," said Lucas, who qualified in the top half of the field just three times during the 23-race season. "It was nothing against anyone (on the team), we just had a really tough year. Consistency was one thing, but we were fighting the fuel system all year long and we never could catch up to it.

"It was aggravating. It was extremely frustrating. I'm very competitive and at my age, all I want to do is compete. It was so frustrating that I wanted to pull my hair out. I'm not mad at anybody, I was just mad at the situation."

But Lucas' team was able to kind of find itself during the back half of the season. He recovered from that six-race stretch where he failed to advance past the first round by earning back-to-back semifinal-round appearances at Brainerd, Minn. and Memphis, Tenn. He was then in position to earn a top-10 finish for the season, but an oil down during the final race at Pomona cost him 15 points and he wound up missing the top 10 by a mere nine points.

But the 23-year-old did find comfort in the way the team responded during the back half of the season. 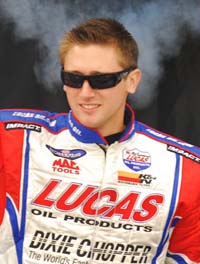 "It was trying this year. But the patience of the team really showed me something," Lucas said. "This team really kept their heads up when the times were bad. My team really persevered, compared to what they could have been. There was never anyone walking in the pits and saying, 'We suck.' There was none of that. I've seen teams and guys do that, and it's not fair to the rest of the team. The guys on my crew just kept working. I really applaud them for that."

And in some sense, he feels maybe it was just meant for him to have a sub-par season, this being his sophomore year, referring to that second-year jinx which is always talked about.

"This was technically my sophomore year," Lucas said. "Maybe it was God's way of telling me that I need to pay some dues. But something was just wrong last year."

The move should be quite beneficial for Lucas as this new syndicate will allow Lucas to gain access to the knowledge that powered Troxel and Todd to a combined five victories last season. The mechanical brain trust will include Richard Hogan (Troxel's crew chief), Jimmy Walsh (Todd's tuner) and Mark Oswald, who will be the team manager.


"I think testing is going to show a lot," Lucas said. "The cars we partnered up with, I think we are going to have a good arsenal of knowledge and experience. And we just brought on Mark Oswald to manage all the teams. He's really savvy with the tune ups, the fuel systems, everything. You can't buy experience like that. The fact that he wanted to be involved in our group is a compliment to our team and our situation.

"We're going to test a lot and we want to come into (the Winternationals) with the confidence that we can get the win."