EVENT PHOTO GALLERY Championships are on the line for the 2nd annual ADRL Battle for the Belts and GetWorkComp.com World Finals from Kennedale, Texas. This is the final event of the 2006 season. Keep up with this weekend's action.

ADRL officials have pulled the plug in Kennedale.  The final three rounds of eliminations will be completed at the Winter Drags in February 2007. Due to ongoing contract negotiations, the exact location of that event in not available at this time.

They might have taken different routes to get there, but Bubba Stanton and Keith Baker both ended up  right where they wanted to be Friday night: in the Texas Raceway  winner's circle, celebrating their 2006 FLOWMASTER American Drag  Racing League world championships after winning their respective  Battle for the Belts eliminators.Stanton (Pro Extreme) and Baker (Pro Nitrous) each turned away seven other would-be champions to win their first ADRL titles and put the  final touches on the 2006 ADRL season. The GetWorkComp.com World  Finals continue Saturday with two rounds of qualifying and 16-car
eliminators in both Pro Extreme and Pro Nitrous, with any points earned during the day counting toward the 2007 ADRL standings.

Stanton was the last man entered into the Pro Extreme field, filling  in the No. 8 qualifying spot as the competition's second alternate.  He used the opportunity to put together by far his best-ever showing in ADRL competition, opening with a stunning 3.897 to oust points  leader Jason Scruggs, following up with a 3.921 to hold off 2005 Pro  Extreme champion John Lynam (3.964) in a good semifinals race, then  posting a 3.914 to turn back Joshua Hernandez (3.954) in the final.

Stanton's best previous result in ADRL competition was a semifinal finish at this year's Huntsville, Ala., event. His 3.897 in the first  round made him just the second driver in ADRL history to dip below  3.9 seconds; the driver in the other lane, Scruggs, did so four weeks  ago in Rockingham, N.C.

In contrast to Stanton's alternate-to-champion path, Baker simply picked up where he left off from the seven points-scoring events of  the 2006 season. He entered the Battle for the Belts eliminator as  the No. 1 qualifier, having scored 1,660 points to outdistance second- place Terry Housley by roughly one and one-half rounds. Friday night, he opened with a 4.10 and an easy win over Harold Martin, ran a 4.11  to beat a red-lighting Shannon Jenkins in the semifinals, then posted  a 4.129 to outrun Burton Auxier's off-pace 4.75 in the Pro Nitrous  final.

The Belts win was the second ADRL title at Texas Raceway for Baker, who won last year's Saturday eliminator at the season-ending event.  He'll get the chance to defend that title Saturday when the top 16  qualifiers determine the 2006 GetWorkComp.com World Finals event winner. Battle for the Belts eliminations results(winners on top)

This was a crazy race, Housley with a .042 light, Kelley with a .059 light, both cars went hard right, Housley got the holeshot win light, but he crossed the centerline & took out the timing blocks, So Rex Kelley gets the win…

Hancock had a .014 light but had problems around half track & Burton takes the win…

Rex Kelley rolled the beams & got the red light & no time, then both guys crossed the centerline, but Auxier gets the win & goes to the final…

Burton had a .008 light but ran into problems again & Keith Baker makes another great run & he is you 2006 ADRL Pro Nitrous Champion!!!!!

Clanton had a .001 light and a .986 60’, but Lynam drove around him for the win. Hats off to Ralph, Bil & the whole family for getting that car back together & it has been straight as a string…

Critchley has problems & Mike Neal advances in the kids Lumina…

Lynam had a good light & was kicking up grass, but he could not keep up with Bubba Stanton!!!!

Neal had a good holeshot but had problems, while Hernandez made a great run to get to the final…

They left dead even & Bubba Stanton absolutely DOMINATED this race… These guys have worked their tales off & BIG congrats on taking the win!!!!

It's My Party - One of the unique things about the way the ADRL awards the world champion belt is the fact that is given to the team on the starting line as the winning car crosses the finish line as opposed to giving the prize to the driver at the top end out of sight of the spectators. This year the teams of both Nitrous and Extreme held their own impromptu celebration in the middle of the track well past the Christmas tree oblivious of the jet funny car behind them preparing to make the final run of the night.

Big Fun - The ADRL series continued its phenomenal growth trend in Kennedale with another unofficial track record in attendance. The Stands were overflowing and fans were lined along the fence several deep the entire length of the track.

Cease and Desist - ADRL president, Kenny Nowling announced to the drivers during their pre race meeting the receipt of a letter from the NHRA by the Kennedale track owners cease and desist any event promoted by the ADRL. The event obviously continued as scheduled with legal minds working behind the scenes to determine exact the purpose of the letter and formulate a response if they determine that a response is in fact necessary.

Reher Present - Pro Stock icon Dave Reher was in attendance at the event. The Reher-Morrison group is preparing to move into the nitrous Pro Modified engine business.

Grabbing the Bull - Shannon Jenkins was in the driver’s seat of the Castellana Cobalt to compete in the Nitrous Battle of the Belts. Jenkins’ previous ride was sold to the Bankston Brothers Racing team and driven by Stan Allen. It was previously thought that Jenkins would still drive the Bankston’s car while competing in the Battle.

Wounded Motor Blues - Mike Neal wounded the engine in the popular Promodifieds.US Studebaker on the very first test pass and it was feared that the team would not be able to compete in the Battle of the Belts. However, Neal and his son, Michael, decided that the elder Neal would slip into the seat of Michaels Lumina for the Battle. Neal took his son’s ride into the finals before dropping the decision to Bubba Stanton.

Bubba's Night - Bubba Stanton had a career night. Setting personal bests in speed and ET, Stanton captured his first win and the title of World Champion. The car Stanton drove, however, is no stranger to the winners circle. Mike Janis piloted the same car to the IHRA Promodified World Title in 2004.

Stanton, who did not qualify for the top eight in the Battle of the Belts, was the second alternate replacing Todd Tutterow. That is making the very best out of a fortunate situation. 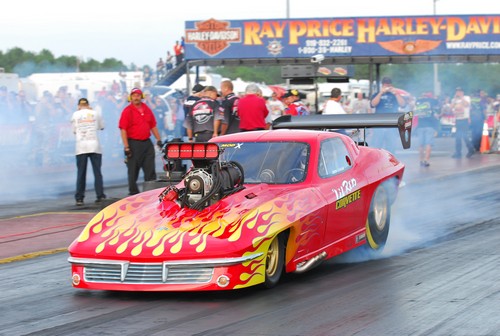 Two days of eighth-mile Pro  Modified racing action at Texas Raceway will both bring an end to the FLOWMASTER American Drag Racing League's 2006 season and serve as the  beginning of the 2007 campaign.

The GetWorkComp.com World Finals kicks off Friday with the ADRL's second annual Battle for the Belts competition, two eight-car  eliminators that will determine the 2006 ADRL Pro Extreme and Pro  Nitrous world champions. The fields for those two events has already  been determined, and when the final pair of cars in the Belts competition goes down the track Friday night, the ADRL's 2006 season will have concluded.

But a clean slate will greet all the drivers in attendance on  Saturday, when two rounds of qualifying will finalize the 16-car  fields for the "regular" World Finals eliminators. All points earned in Saturday's competition will count toward the 2007 ADRL points  standings.Last year, drivers such as Pro Nitrous winner Keith Baker and Pro  Extreme runner-up John Lynam used their second-day performances in Kennedale as a springboard toward the top of this season's points  standings.

Overall, seven of the 17 drivers who scored points at the  2005 Kennedale race went on to qualify for the 2006 Battle for the  Belts championship eliminators.

The GetWorkComp.com World Finals begins with open testing on Friday from 2 p.m. to 8 p.m. The first round of the Belts competition is  scheduled for 8:30 p.m., with qualifying for Saturday's fields  kicking in at 9:30 p.m.

The Pro Extreme half of the 2006 FLOWMASTER American Drag Racing League Battle for the Belts  competition will get serious from the opening bell Friday night at  the GetWorkComp.com World Finals when ADRL veterans John Lynam and  Bil Clanton meet in the first round.

Lynam and Clanton met in the final round of last year's inaugural Battle for the Belts competition, with Lynam emerging as the 2005  ADRL Pro Extreme world champion following a 3.959 to 4.014 win.  Between them, the two drivers have won five ADRL event titles and  have appeared in a combined 10 final rounds.

Other drivers qualified to compete in the three-round, single-elimination battle for the ADRL Pro Extreme title Friday at Texas  Raceway include top points-earner and Pro Extreme record-holder Jason  Scruggs, two-time finalist Mike Neal, and Joey Martin, the only  driver in either ADRL class to win two events in 2006. The competition begins at 8:30 p.m. local time.Following is a look at each driver in the Pro Extreme field, in order of placement in the final 2006 ADRL points standings (2006 records  include 2005 Kennedale event): 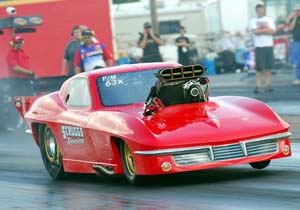 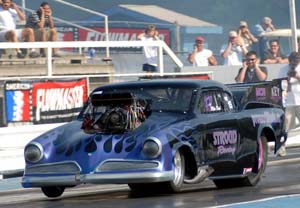 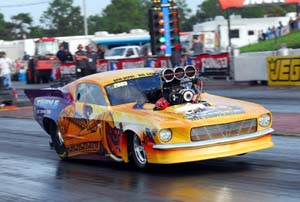 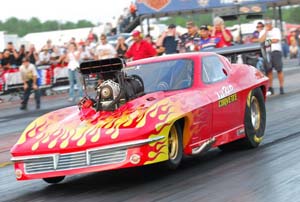 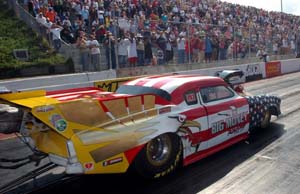 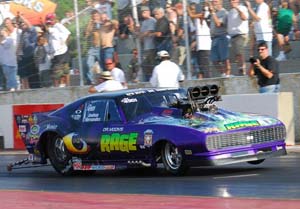 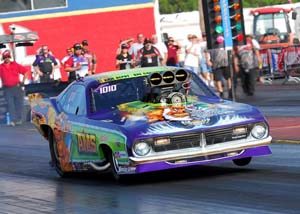 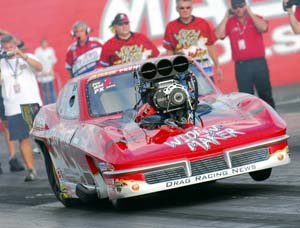 Only one thing will be certain when the FLOWMASTER American Drag Racing League's Battle for the Belts  championship eliminators get under way Friday night at the  GetWorkComp.com World Finals: a new ADRL Pro Nitrous world champion  will be crowned.

Following is a look at each driver in the Pro Nitrous field, in order of placement in the final 2006 ADRL Pro Nitrous points standings  (2006 records include 2005 Kennedale event):