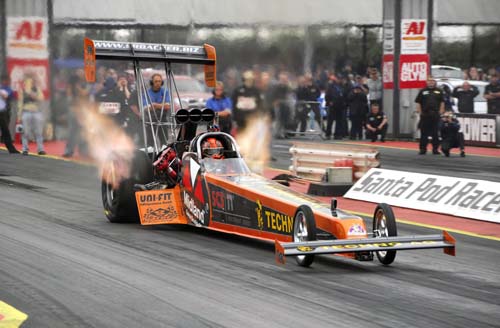 Britain’s Andy Carter showed his intentions right from the word go with a stunning, FIA European record-setting 4.703, slowing to just 270mph. This figure held until the final qualifier when he upped the numbers to a great 4.645 at just 296mph. This led the field of nine by over one tenth of a second. Sitting on the bubble was Denmark’s Stig Neergaard with a 5.5039/224 and Finnish ski-jumping champion Janne Ahonen sat outside with a 5.565/197.

Round one opened with a wheelie from Sweden’s Jöran Persåker that had him lift off the throttle to record a losing 5.245/254 as Finn Tommi Haapanen charged away to win with a 4.891/302. Swiss giant Urs Erbacher made short work of his win as Sweden’s Micke Kågered hurt the motor just off the line and scored no times to the 4.941/274 win. Norway’s Thomas Nataas was on a roll throughout qualifying running 4.7s to end up third then dispatching point leader, Holland’s Lex Joon in the opening round 4.847/304 to the losing 4.897/312, won on a holeshot. Andy Carter’s luck went away in round one courtesy of a thrown belt and he coasted to a 7.362/106 as in the other lane Stig Neergaard got crossed up on the launch, recovered the machine then pedalled his way past Carter winning with an entertaining 7.093/180 much to his opponents disgust to end the round.

Tommi Haapanen’s luck disappeared in the second thrash when he could not fire the car due to a faulty starter motor, allowing a jubilant Stig Neergaard to just launch and coast to the win with an easy 13.265/61. The following pair produced a pedalling contest as the both hit tire smoke at half track with Urs Erbacher slipping past to record the win with a 5.645/233 as Thomas Nataas fire-balled the motor, slowing to a 5.923/163 lose.

The team from Denmark could not believe their luck in obtaining a final round place after being virtually written off in the beginning. Stig Neergaard in his Tribune-Udlejning.dk machine gave it his all against Urs Erbacher, but it was Erbacher’s lead in the Midland Oil/SCS IT/Techno AG car that scored the win and the FIA Top Fuel European Championship with a 4.817/291. Neergaard ticketed a career-best pass with fiery 4.879/308 to become event runner up. 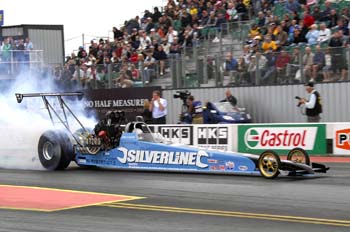 Britain’s Rob Turner pushed his machine to lead qualifying in the first two sessions with a fine 5.534/255 but then Dave Wilson continued his rapacious dominance with a 5.456/258 to head the seven-car eliminator, leaving Krister Johansson on the bubble with a 6.162/244.

Wilson opened the round with a 5.459/258 bye-run just to show he was not to be trifled with. Norway’s Paul Ingar Udtian was making improvements all weekend in Wilson’s old car but suffered a pernicious pop at three-quarter track that allowed German Timo Habermann to pass him with a winning 5.743/245 to a slowing 7.377/107.  Fuel woes once again hit Krister Johansson’s injected nitro entry, slowing him to a 6.392/234 as Rob Turner caught and passed taking the win with a 5.486/255. Last pair in the round had class rookie Derek Flynn red light away any chance against German Peter Schöfer’s 5.621/253.

Another big cherry on the tree indicated a disappointment for Timo Habermann, his 5.802/244 wasted as Dave Wilson powered to a 5.525/243 win. The red came on again for Peter Schöfer, who carded the disqualified 5.612/254 numbers as Rob Turner rode out tire-shake but still managed a great 5.488/254 win to end the semis.

Normally the final puts Britain versus Germany, but here it was an all-English battle as Wilson in the Silverline Tools/ PlayStation 3 car faced Turner’s mount in the money run. Wilson left first on a 0.145 light to his opponent’s 0.196 and held on to take the event win and the FIA Championship with a 5.492/257 to the closely following 5.485/254. 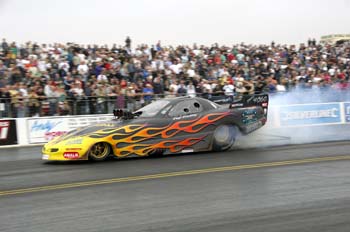 The opening-round saw Sweden’s Leanders, the defending champion, take an easy win with a pass of 6.063/233 as Finland’s Jarmo Kuutniemi had problems and slowed to an 11.842/75. The Belgium hopes were dashed when Danny Bellio red-lit away his luck and having seen his mistake slowed to an 11.0302/80 as Fagerström won with a 5.902/248. A tardy leave by Sweden’s Kjell Sjoblom coupled with a 6.039/233 lost him a next round placing as Denmark’s Dan Larsen powered through to a 5.997/236 win. Steph Milam could not repair engine damage after her qualifying trip into the sand on Saturday, allowing Andréasson to record a 5.941/197 win despite popping the body panel off at three-quarter track.

A Sweden vs. Denmark bout gave the crowd the final as Leanders’ IronCAD-backed Firebird faced Larsen’s Boxter Dodge Avenger, Leanders suffered shake turning right then left before he backed off to a losing 7.075/147 that saw Larsen take the event trophy. 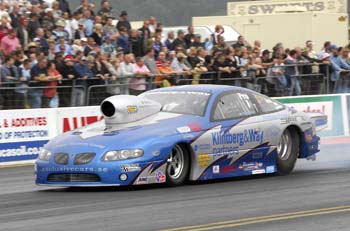 Qualifying saw Sweden’s Jimmy Ålund temporarily lead the nine-car field with a fine 6.809/200 until the mark was bettered by Finland’s Eero Knihtilä with a 6.806/203. Jan Palmqvist sat on the bump with a 6.967/198, making it only the second time since the Swedish round at Mantorp Park in July that there was an all six-second field.

Round one opened with Magnus Hansson getting away first but coming close to the wall before losing with a 6.908/199 as class rookie Jonas Dantanus ran the winning 6.878/200. It was his third 6.8 and first 200 mph pass. Ålund lifted the wheels for quite some way before coming to ground to record a winning 6.832/200 to down the slowed 7.028/199 from Michael Callin. Kenneth Söderström got away first against Michael Malmgren but was reeled in with a great 6.807/202 to the ailing and slowing 7.247/167. Palmqvist and Knihtilä commenced a long burn-down on the tree, with Palmqvist leaving first but suffering tire shake and lifting. In the other lane, Knihtilä turned in the first-ever European 6.7 with the winning 6.792/202.

The second round saw the European E.T. record set at 6.781 at 202 mph as  Knihtilä carded the win against the 6.921/194 from Dantanus. The other pairing had Ålund get closer to another championship when he took full advantage of the holeshot against Malmgren. Ålund ran the winning numbers, a 6.869/199 bettered the 6.818/202, to end the record-setting round.

In the final Knihtilä failed to come up with another 6.7 and paid the price as his 6.841/201 was ably beaten by the holeshot from the now-FIA Champion  Ålund with his winning 6.867/199 in the Klintberg & Way Partners Pontiac GTO. 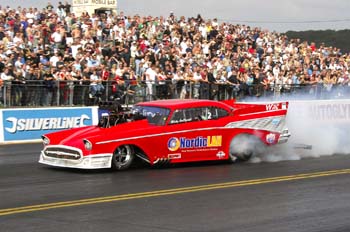 The massively popular Pro Mods fielded a twenty-car qualifier for the sixteen competition places. Qualifying was initially led by Sweden’s Mats Eriksson (6.262/227) then England’s Andy Robinson took over (6.239/227) before Sweden’s Micke Lindahl pulled one out of the hat to completely dominate the class with a 6.175/229. In the last session, Lindhal upped the mark with a European E.T. record of 6.110 at 223mph.

A number of top names went out in round one, including Marc Meihuizen, who went out to Patrik Wikström, Gordon Appleton, who was sent to the pits by Mats Eriksson, 2006 champion Urban Johansson lost to Norbert Kuno, and Roger Johansson was victimized by Micke Gullqvist.

Round two opened with a stunningly close confrontation as a late-entered Patrick Wikström kept his holeshot in working order and ran 6.338/223 against the 6.355/222 from fellow Swede Mats Eriksson. Britain’s Robinson took another pace toward the championship with a 6.238/220 as German Kuno shook and got a little crossed up, slowing to a 10.160/111. Switzerland’s Bruno Bader has upped his performance nicely this season but it disappeared against Sweden’s Lindahl. A 6.121/222 took Lindahl to the win as Bader shook and slowed to a 7.226/213, the Lindahl numbers backing up yesterday’s 6.11 for the European E.T. record. Sweden’s Gullqvist strapped a great leave on Dutchman Robert Joosten then carded a fine 6.233/225 to the shaking 7.504/213 try.

The semis will hold nightmares for Robinson as he struggled to get reverse after the burnout, finally shutting off with clutch problems and waving goodbye to his championship hopes as Gullqvist soloed to the win and the FIA Championship with a great 6.187/225 pass. The other pairing had Lindahl shake but he could not recover in time to catch a rapidly disappearing Wikström as he charged to the win with a 6.573/216 to the 6.722/218 loss.

The final pitted two Swedes – Gullqvist, the new champion, in his NordicLAN Chevy Bel Air against the ‘Thriller’ Camaro of Wikström. Gullqvist left on a 0.090 light but on reaching half track succumbed to a puff of engine smoke that left the way open for Wikström, who netted a 6.386/222 win to the slowed up and losing 7.070/144. 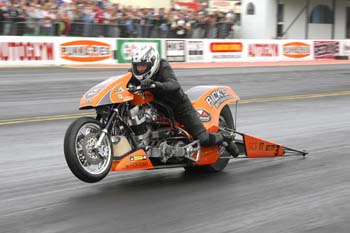 A great pair of leaves had Stäuble in front all the way on his Rick’s Motorcycles-backed 2600cc Harley and he took the event win to add icing to his Championship cake with a 6.606/208 as Sohn clicked off at about five hundred feet as he came close to the guard-wall. 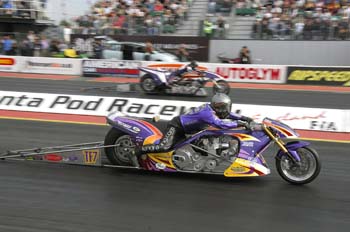 The mix of Top Fuel Bike and Funny Bike gave for a good combination of power but it was the fuellers that triumphed over the others. Qualifying was initially led by Britain’s Steve Woollatt with a 6.370/217, but was put into second spot by Frenchman Eric Tebout with a 6.208/229 ride.

Teboul could not make repairs in time, allowing a relieved Ferretti to take an easy 10.670/100 run into the final. It was not quite so easy for King and his bout with Midgley. Midgley left first and zoomed to a 6.819/192, only to have King fly past in the closing stages to win with a 6.614/177.

The best was saved for last when the final would sort out the FIM/UEM Champion. King cut a great light and ran on his old form to get a 6.444/191 win as Ferretti tried in vain with a 6.615/198 effort. 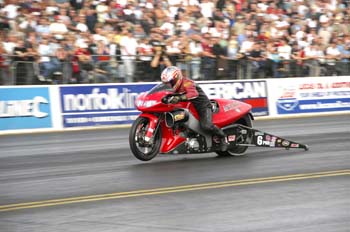 Denmark’s Tom Tinndahn, riding his Buell, ruled the roost in the 14-bike class, his 7.172/174 was almost a tenth and a half in front of his nearest rival and defending champion Anders Abrahamsson’s 7.315/182.

Tindahn was taking no prisoners as he relentlessly worked his way through the eliminations. His first victim was Finland’s Fredrik Fredlund, who went down 7.221/182 to 7.599/169. Sweden’s Örjan Gustavsson managed a 7.690/156 win as fellow countryman Anders Larsson had death smoke from half-track.  Abrahamsson had to play catch up to England’s Len Paget’s leave but Paget got close to the centre line and Abrahamsson powered past to record a 7.295/181 win to the 7.697/173 loss. Another holeshot for Britain’s Martin Bishop saw him record a winning 7.656/172 to beat the better but losing 7.486/175 effort of Sweden’s Anders Jakobsson.

Gustavsson did not show for his round with Tinndahn, giving him an easy 7.176/182 route to the final. Former champion Abrahamsson broke just off the line allowing Bishop to secure the win with a 7.584/172 to enter the final round.

It was really no contest as Tinndahn on his MCParts-backed Buell led the way from the outset. His pass of 7.197/175 beat the 7.604/172 try from Bishop and earned the FIM/UEM Championship for Denmark.