Following his Round 1 victory over Jim Head in the Castrol GTX Ford Mustang,
John Force couldn't help but talk about his chief rivals in this championship
hunt.

"I'm going to get emotional here," Force, at the time one round-win
away from clinching his unprecedented 14th series title, said. "You know how
much I love [Ron] Capps and how much I lover Robert [Hight]. Then he referred to
those two drivers' last-ditch efforts to knock him aside to claim a first
championship: "You've got to throw a Hail Mary. But I've seen Hail Marys before,
so I'm going to keep my mouth shut." 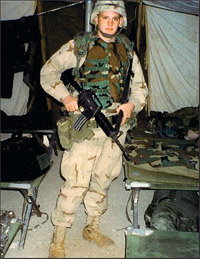 John Force dedicated his Funny Car triumph Sunday to Bryan Brewster, a U.S. Army
sergeant killed May 5 in a helicopter crash in Afghanistan. The young soldier is
the son of longtime motorsports writer Louis Brewster, sports editor of the
Inland Valley Daily Bulletin in Ontario, California, and the San Bernardino Sun.

"I was even praying to your son, Louis," Force told Louis Brewster, his
friend for years. "I have a trophy for him, and I think you deserve
that.

Doug Kalitta sat silent on his golf cart at the top end of the track, watching
the final-round results. And even Tony Schumacher, who had a gracious moment
with the man whose goal he stole after exiting the car, couldn't help sympathize
with the Mac Tools Dragster.

"I felt so bad. I love the guy. Of all the
people to battle with, if I couldn't win it, I'd pray for him to win it. He's so
deserving."

FINAL ROUND RESULTS FROM POMONA

Sunday's final results from the 42nd annual Automobile
Club of Southern California NHRA Finals at Auto Club Raceway at Pomona.
The $1.8 million race is the final of 23 in the $50 million NHRA
POWERade Drag Racing Series: 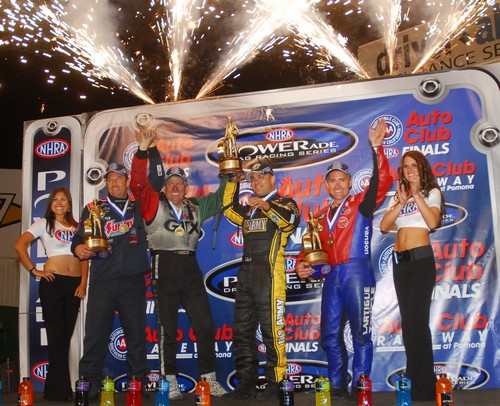 Tony Schumacher completed the biggest comeback in NHRA drag racing
history Sunday at Auto Club Raceway at Pomona and clinchedthe 2006
POWERade Series world championship with a national record final-round
run that has to be considered the greatest quarter-mile pass of all
time.

NHRA officials have announced that Top Fuel driver Tony Schumacher has
been fined $20,000 for failing to follow the commands of NHRA Chief Starter Rick
Stewart during Saturday’s final qualifying attempt at the Automobile Club of
Southern California NHRA Finals.

NHRA announced today that Dan Olson,
veteran crew chief most recently with
Don Schumacher Racing, has been
named as Director, Top Fuel and Funny Car
Racing.  Olson, who has more
than 40 years of experience in nitromethane
racing, starts his new
position on Dec. 1.

"We are excited to have
someone with Dan's knowledge and experience
working at NHRA," said Graham
Light, senior vice president of racing
operations.  "Dan is a tremendous
asset and will help us to provide
long-term solutions to advance our sport."

SCHUMACHER ON SHUT-OFF - "I clearly saw him." 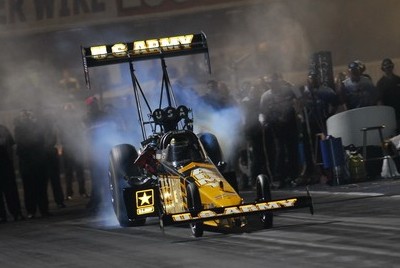 Official starter Rick Stewart spotted some fluid leaking onto the right lane
from Tony Schumacher's Army car, and he and Rick Shreck, assistant director of Top Fuel and
Funny Car racing (Ray Alley's replacement), clearly ordered the team to shut off
the car.

Schumacher's team ignored the order. Schumacher ran, and
his plans went up in smoke immediately. He lost traction at the first hit of the
throttle. So his 4.458 E.T. that had put him at the head of the list the
previous two days had to serve as his best.

NHRA officials are reviewing
the incident and a prepared statement indicated that they are considering
punitive action against the team.