Robert Hight, NHRA's 2005 Rookie of the Year, will serve as Grand Marshal of
the March Meet when the event returns to Auto Club Famoso Raceway, Mar.
9-11.  Hight, who finished second in last year's Nitro Funny Car Division of
the NHRA POWERade Drag Racing Series, will reign over the jewel of nostalgia
drag racing as drivers from across the country compete in 14 classes.

His Automobile Club of Southern California and Castrol-sponsored 7,000
horsepower Ford Mustang will be on display all weekend at the extensive
Auto Club display near the pits.  Hight will be signing autographs on both
Saturday and Sunday.  When he's not signing autographs, he'll be having
fun at the family-oriented meet with his wife Adria and daughter Autumn.
Adria is also involved in motor sport.  She's not only Hight's wife, she's
John Force's eldest daughter.

They say every adventure begins with a first step. For Rodger Brogdon
the first steps in his pro stock career came this past week as the team
ventured to Houston Raceway Park for some obligatory new car check out
laps as well as the laps needed to complete the licensing runs for
Brogdon’s pro stock license.

Taking advantage of some 70 degree January weather, the team was able
to get some laps completed down the newly resurfaced track at HRP. With
the favorable weather, the track was prepped and Rodger and his new
Jerry Haas Dodge Stratus started the process of driver becoming one
with the car. Initial hits were short launches to make sure the chassis
and wheelie bar settings were on target. As the day progressed, so did
the distance down the track and by late in the day, Brogdon was ready
to see just how well the team could do in its first full lap down the
track.

Veteran Top Fuel Wrench, Dave Hergert, died
suddenly on Saturday, January 13, 2007.
He was 42 years of age.   He
succumbed to injures suffered in an auto accident three months ago.  Affectionately known as Brother Dave, by
those who knew him.  Dave spent nine
years in Top Fuel drag racing, starting out as a co- crew chief in 1997.  He gave his heart and soul to drag
racing.  He will be sorely missed.

SHIFTING TO A HIGHER GEAR

Nate Shelton, CEO of the B&M Companies, announced today
that his firm had purchased the Hurst Shifter Division of Mr. Gasket,
Incorporated.

Hurst has been a familiar name to drag racers for more
than 40 years due to not only their OEM applications, but for their
numerous products that have seen action on the quarter mile. 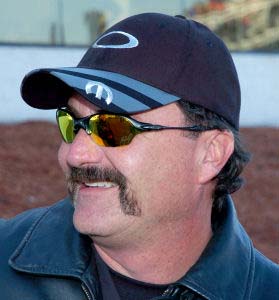 As the NHRA POWERade Drag Racing Series prepares to raise the curtain
on a new season of outstanding competition at the Auto Club Raceway in
Pomona, Calif., on Feb 8-11, four-time NHRA champion Gary Scelzi
reflects on his 2006 season attempting to defend his 2005 Funny Car
crown, all that he is thankful for, his other non-NHRA racing ventures,
and driving the Mopar/Oakley Dodge Charger R/T for a fifth year with
Don Schumacher Racing.

The three-time Top Fuel (1997, '98, '00) and one-time Funny Car
champion ('05) is coming off a tough year, in which he won one national
event in three final rounds, placing seventh in the Funny Car point
standings. His season also included one DNQ (did not qualify), rounding
out his career statistics to 33 wins in 54 final rounds, 42 No. 1
qualifiers, a total offive DNQs, and a career round win-loss record of
345-174.

Mach 1 Air Services will sponsor two of drag racing's biggest stars --
Funny Car rookie Ashley Force and third-year Pro Stock racer Erica
Enders -- in 2007 and beyond. In an effort to broaden its global name
recognition in the months following expansion into Singapore and China,
Mach 1 Air Services hopes Force and Enders continue to make them the
preferred air freight forwarder in the world. "

We're thrilled to officially announce our sponsorship of Ashley Force
and Erica Enders," said Mach 1 CEO and founder Mike Entzminger. "Name
recognition is very important in our business and we're confident these
two young drivers will bring lots of positive attention to our company
and a whole lot of fun to our employees.

Penhall Company
has announced a partnership with Mike Edwards Motorsports to a
sponsorship deal for the 2007 NHRA POWERade world championship season.
The Penhall Company is recognized as one of the leading specialty
contractors in the United States. Edwards, who finished fourth in 2006,
will fly the well-recognized company logo on both his Pro Stock Pontiac
GTO and team transporter.

"By joining with
the Penhall Company, it allows us to further this team's mission of
reaching kids around the country," said Edwards. "We are honored to
represent the Penhall Company and be part of that groups marketing
strategy in the drag-racing arena and do even more to reach out to kids
through our many programs with Young Life.

It was announced earlier today during a press conference at John
Force Racing headquarters that Ashley Force will turn pro this season
and drive a Ford Mustang Funny Car for John Force Racing with
sponsorship from Castrol, Auto Club of Southern California, Brand
Source, Mac Tools and Mach 1 Air Services.

The crew chief of the new team will be Dean “Guido” Antonelli,
long-time crew member for her father's team. A little background on
Ashley. She's been racing in the sportsman ranks. Last April she earned
her Funny Car license. Since then in testing she's posted performances
of 4.809 seconds, 4.826 seconds at speeds over 320 miles an hour. Her
first NHRA event victory came in Top Alcohol dragster at the 2004 U.S.
Nationals (in Indianapolis).

She also won that year at Dallas, and also at the Auto Club Finals at
Pomona, where she shared the winner's circle with her father. It's the
only father-daughter event winners n NHRA history. In three seasons in
Top Alcohol dragster she won five times in nine final-round
appearances, finishing fourth, seventh and fifth in national points
during that time.

She'll be the 10th female to compete in a Funny Car in NHRA history.
The last female to drive a Funny Car was Cristen Powell during the 2000
season. No female has ever won or qualified No. 1 in Funny Car.

The best race day effort for a female in Funny Car was accomplished by
Della Woods in 1985 at Reading, Pa. She advanced to the semifinals of
that race where she lost to Kenny Bernstein.

Ashley will join her father John, Eric Medlen and Robert Hight on the
team that has claimed 15 NHRA world championship titles and 168
national event victories in NHRA competition since 1987. Ashley plans
to test at Las Vegas this weekend, and Phoenix the following weekend
before her official pro debut February 8, at the CARQUEST Auto Parts
NHRA Winternationals at Auto Club Raceway at Pomona, where she will
join her fellow Funny Car competitors as the 2007 NHRA POWERade
Countdown to the Championship begins.

We'd like to welcome Ashley to the teleconference. A little later we'll
have John Force on the call to answer some questions as well.

For this season’s $250,000 Summit SuperSeries, IHRA has once again
teamed with Race Tech Race Cars to provide the grand prize for the 2007
Box category World Champion.

The winner will receive a turnkey
dragster courtesy of Race Tech, constructed from the highest quality
performance products donated by some of IHRA’s contingency sponsors.
Race Tech, of Burlington, N.C., has manufactured award-winning,
high-performance race cars and racing components for motorsports
professionals across the country for more than 15 years. Their cars
have set performance records for some of motorsports best teams and
their tradition of quality craftsmanship and dedication has earned them
an outstanding reputation in the industry.

Following almost a year of supervised testing and months of media
speculation, John Force confirmed Tuesday that his second oldest
daughter, Ashley, will move up in classification this season to drive a
fourth Ford Mustang Funny Car for John Force Racing, Inc., Castrol and
the Automobile Club of Southern California.

Ms. Force, who turned 24 last Nov. 29, will drive an 8,000 horsepower
Castrol GTX Ford prepared and maintained by first time crew chief Dean
“Guido” Antonelli who, for the last 12 years, was a member of the crew
that helped John Force win 10 of his 14 NHRA championships.