FINAL ROUND RESULTS FROM ROCKINGHAM 2007

Sunday's final results from the Spring Nationals at Rockingham Dragway.
The  race is the second of 12 in
the $19.5 million 2007 Knoll - Gas Nitro Jam Drag Racing Series

The quickest nitrous run of qualifying (a 6.168) was not the talk of
the weekend. The talk was largely centered around a testing lap two
days before the event.

Once again, Shannon Jenkins and the Awesome Motorsports team have given hope to
nitrous fans everywhere. After countless hours of off season research and
development and testing throughout the beginning of the season, Jenkins uncorked
the first 6.0-second nitrous pass in history while testing at the newly
resurfaced Darlington Dragway on Wednesday.

“The Iceman” piloted teammate
Mike Castellana’s brand new Jerry Haas-built ’07 Western Beef Mustang to a
6.080, 231 MPH blast in the heat of the day.

Foley, Cannon Jr., Munroe and Mansfield
also qualify at the top of their classes in front of one of the largest crowds
in Rockingham Dragway history

WJ TALKS PAST AND PRESENT 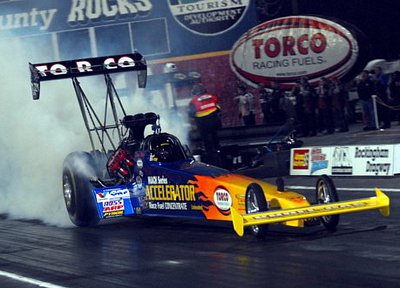 Foley clocked a 4.552, 320.74 to take the top position. He won the
“Last Man Standing” as well. Points leader Bruce Litton, Indianapolis, sits in
the second position with a 4.631, followed by Michael Gunderson and Scott Weis
at 4.677. Bobby Lagana Jr. sits on the bump-spot.

“The car moved around quite a
bit,” said Foley. “It was a great run for us. That’s what we needed to come out
and do. Everyone is running so tough this year that every point is going to
count.” 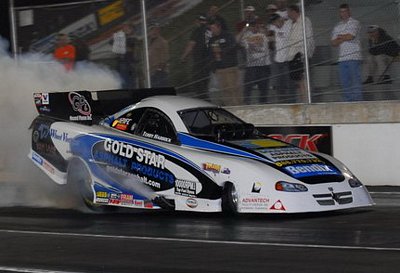 THE VISION OF TF

The only thing more important to a Top Fuel driver than talent is the
ability to see. For a period of nearly a year, newly christened Top
Fuel driver Terry McMillen had that taken away from him.

McMillen's eyesight woes began late in 2005 after successfully
licensing to be a Top Fuel driver. He gained valuable help from Evan
Knoll, but even his employer/sponsor couldn't assist him in this
battle.

NHRA Top Fuel driver J.R. Todd will be a guest on SPEED-TV's Wind Tunnel
program, hosted by Dave Despain, Sunday at 9 p.m. EDT.  The driver of Dexter
Tuttle's SKULL Shine/Torco Racing Fuels dragster will be interviewed at the
team's shop in Brownsburg, Ind.

STEVENS ON A ROLL HEADING INTO TIN TOPS

Drag Racing champ Brett ‘The Boss’ Stevens will be back on his home track at Willowbank Raceway, Queensland, on April 28 to turn up the heat for Round 6 of the Australian Top Doorslammer Championship at the QT Tin Top Titles.

Del and Chuck Worsham's pet side-project, their Blue Max nostalgia Funny
Car, may make an appearance this weekend.  Worsham is planning on entering
the car in the one-day Nostalgia Nitro Shootout event, at Auto Club Dragway
in Fontana, Calif.  In real throw-back tradition, the father and son team
will be handling much of the wrench turning, as well.