Earlier in the season, Hot Rod Fuller wrapped his parachute around the
wing of his Top Fueler. The first session in Englishtown provided the
same result for Whit Bazemore. The car came to a safe stop. (Les Welch,
DragRaceUSA.com )

Officials from NHRA announced today that Technicoat, a West Coast
leader in waterproofing and shot-blasting services, will sponsor the
NHRA Top Fuel Shootout in 2007.

Legendary American motorsports journalist Chris Economaki was honored
today with a Lifetime NHRA Media Award prior to the first round of
qualifying at the ProCare RX NHRA SuperNationals presented by R2B2
Motors at historic Old Bridge Township Raceway Park in Englishtown, N.J.

Already this season, John Force has lost in the first round six times,
been beaten by a woman for the first time ever and failed to qualify
his Castrol GTX® High Mileage™ Ford Funny Car for an NHRA tour event
for the first time
in 20 years.

With the mid-point in the season just ahead, the 14-time NHRA Funny Car
champion finds himself outside the Top 10 in driver points for the
first time since 1982.

Not to worry.  Drag racing's most prolific winner has a prescription
for what ails him and he takes the cure this week when the NHRA
POWERade tour moves to Old Bridge Township Raceway Park for the 38th
renewal of the Pro Care Rx SuperNationals.

"I'm going in with a different attitude," said the 58-year-old drag
racing icon.  "The Eric thing (prot‚g‚ Eric Medlen's tragic death
following a testing accident last March) was rough on all of us, the
fans as well as the racers, and I know that the overload from building
new shops in Indy to training my girls, Ashley, Brittany and Courtney,
to working with the TV show (A&E Network's real-life series
"Driving Force") took a toll.

Remember Pro Stock legend Herb
McCandless? Soon you will hear more about his sons Herb, Jr. (39) and Michael
(28), as they have finalized the purchase of Piedmont Dragway, located near Greensboro, NC.

The McCandless Brothers have big
plans for the facility which include maintaining the popular Big Dog Series as
well as bringing in more 10.5-inch tire competition.

This year Motor Mile Dragway is expanding the Extreme Class into a
separate division and will consist of two main events with two associated
testing sessions. Both blower and nitrous cars are eligible to compete under
ADRL Pro Extreme and Pro Nitrous rules and specifications. The Motor Mile
Extreme Class will run on July 14th and August 18th with testing dates on the
Friday
prior to those events (July 13th and August 17th).

THE BENEFITS OF A DRAG RACING BOSS ... 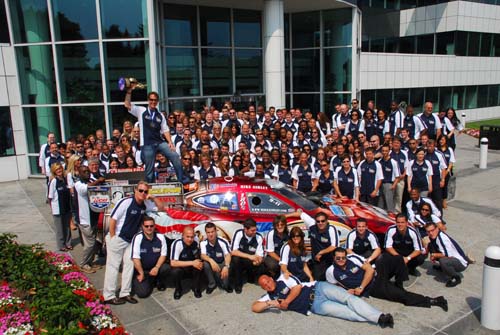 When
you work for a drag racing boss, you get to do cool stuff -- for
instance, like taking time off to congregate around the race car. Mike
Ashley and his Lend-America show off the primary water cooler conversation piece -- the Torco Race Fuels Fuel Doctor Funny Car.