San Antonio Raceway will be the site
of a historical season opener for IHRA as for the first time in history a major
drag racing sanctioning body will host a scheduled 1/8th mile
national event. The Amalie Oil Texas Nationals will take place April 4-6 in San Antonio, bringing
IHRA racing to the 1/8th mile strip for the third time ever. Track
conditions caused two events on the ‘07 Knoll Gas Nitro Jam schedule to be
switched from quarter-mile events to the 1/8th mile and the response
from fans, sponsors and racers opened IHRA officials’ eyes to the possibility
of scheduling a race under this format.

“Last season we really learned
something in San Antonio,”
IHRA president Aaron Polburn said. “While the quarter-mile has been the
standard drag race for a long time, we learned an 1/8th mile
national event is a viable, exciting format. The buzz and excitement the Amalie
Oil Texas
Nationals generated caused us to take a good, hard look at this format. We’re
very excited to grow this race and build our 1/8th mile national
event slate in the future.” 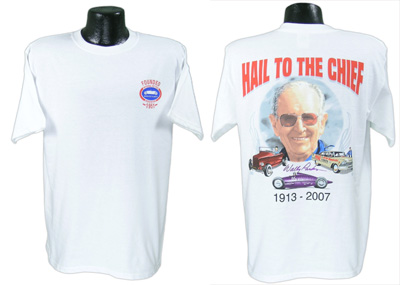 Commemorative T-shirts, decals, and patches honoring late NHRA founder
Wally Parks are available online from www.nitromall.com. One of the
coolest items is this Hail to the Chief T-shirt. All proceeds will
benefit The Wally Parks NHRA Motorsports Museum presented by Automobile
Club of Southern California in Pomona, Calif.

The POWERade Drag Racing Series is entering an unprecedented, pressure-packed
stretch of two races that ultimately will decide all four NHRA champions. The
newly-implemented Countdown to the Championship has pared the field of eligible
racers to the top eight and then the top four, who will now race for the title
over the final two events of the season in Las Vegas and Pomona,
Calif.

With so much money and prestige on the line over consecutive
weekends, the feelings of stress and anxiety have never been higher in 56 years
of NHRA competition, which suits Pro Stock driver Jeg Coughlin just fine. In 18
years of drag racing, the 37-year-old Coughlin has won three world titles and 50
national events.

Over that time Coughlin has developed a well-deserved
reputation as one of the most unflappable racers in the history of straight-line
competition. That coolness should serve him well in the days to come.

"I
think it will all come down to who performs the best over these last eight
rounds of racing," Coughlin said. "The pressure is on the drivers. I look at the
four of us in this final group and between us we've won 19 of the first 21
races. That tells me our cars are pretty doggone similar and we're all making
about the same horsepower. The difference could come down to which one of us
performs flawlessly when the helmets go on."

The NHRA POWERade Drag Racing Series is taking over the Fremont Street Experience in with a one-of-a-kind Fan Fest Thursday, Oct. 25 from 5-7 p.m.

In what should be one of the biggest Fan Fests in NHRA
history, all 16 of the drivers remaining in the NHRA POWERade Countdown
to the Championship are expected to be on hand for autographs and
pictures with fans. Also expected to attend are many top drivers not in
the Countdown including legendary Pro Stock racer Warren Johnson.

One of the highlights of the event will be an unbelievable
video and light show scheduled for 6:30 p.m. on the famed Fremont
Street Viva Vision Seven-thousand horsepower will meet 550,000 watts
and 12 million lights in a special NHRA POWERade Drag Racing video and
light show. Towering 90 feet above the street, Viva Vision will bring
to life the power of NHRA POWERade Drag Racing in a way you've never
seen before.

ESPN2 and ESPN2HD will air a special presentation of its popular pre-race show, NHRA Race Day,
to preview the Countdown to 1, the two-race championship round of the
NHRA Playoffs that will determine the 2007 POWERade Series world
champions.

The show, hosted by David Rieff with analysis from 22-time
winner Mike Dunn, will air Sunday, Oct. 21 at 11 a.m. (ET) and
originate in-studio from ESPN Regional Television in 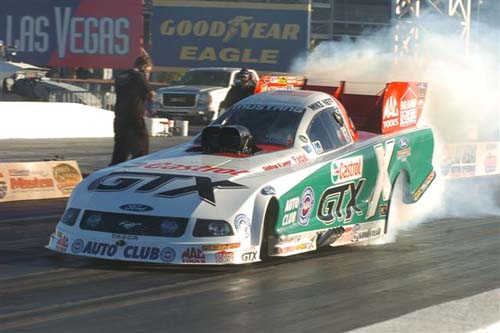 If Greg Anderson doesn’t find exactly what he was looking for
during three days of testing at The Strip at Las Vegas Motor Speedway,
it’s not through lack of effort.

Anderson and his Summit Racing team completed more than 20 passes at
the last-minute session, 10th of which were on Day 3. For comparison,
winning NHRA POWERade Series teams make a maximum of four laps on race
day with maintenance between each round.

Anderson brought his teammate Jason Line, the defending world champion
who narrowly missed the Countdown to 1, and some of his crew to testing
so the Ken Black Racing-owned team could cover more ground.

“We’ll never find everything you’re looking for,” Anderson said. “We’re
nitpicking and seeing what this track does like and what it doesn’t
like. Hopefully we won’t make those wrong moves during the race.” 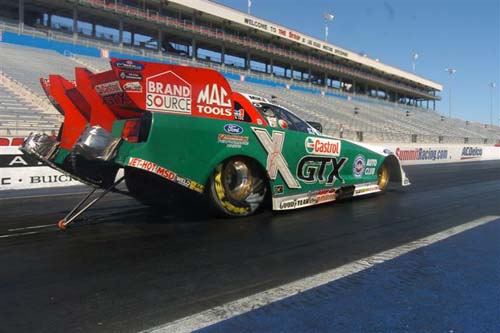 Mike Neff ran a 4.81 elapsed time at 318.47 miles per hour to
complete his licensing requirements for nitro Funny Car. The crewchief
turned driver posted a 4.849, 316.23 on Wednesday.

Neff is scheduled to make the first runs with the new FORD engine in
the car later today. Torco’s CompetitionPlus.com will have photos of
the new engine later today.

CHRR WAS A BARNSTORMER

The 16th annual
edition of the Hot Rod Reunion was another barnstormer despite being
interrupted by rain on a couple of occasions during the weekend.

Prior to the event there were predictions that at least 20 cars would contest
both Top Fuel and Funny Car and while the flopper contingent fell short of that
number with 16 cars actually making runs during qualifying there were 21
Dragsters on hand to put on a spectacular show.

Brad Thompson led the pack after each of Saturday’s sessions and then
steamrollered the opposition on Sunday. His opening round win over Rick Rogers
was his slowest pass of eliminations at 5.902. He then stepped up with a best
of the round 5.768 to take out Rick White, running a stout 212 mph at
half-track to advance to the semifinal. Here the Agent Orange car got a freebie
when Jason Richey could not make the call in Dave Smith’s Sacramento-based
entry. Even with a final round berth in the bag Thompson wowed the fans with a
5.706 to further lower his best-of-the-event elapsed time.

On the other side of the ladder, No. 2 qualifier Jim Murphy beat Mike McLennan
in the opening stanza and then put away Denver Schutz’ Raisin Express in the second
round, running a stout 5.789 to overcome a holeshot. In the semi Murphy was
again late off the line in the WW11 car but went to the final when Pete
Kaiser’s ride stumbled after leaving with a great .035 reaction time.

Jack Beckman feels he has something to prove after being bumped out of
the inaugural NHRA POWERade Series Countdown to the Championship field
in Richmond.

He probably didn’t need to, but he showed once again on Wednesday that
he could still star in the roll of spoiler, driving his Mail Terminal
Services Dodge Charger to a 4.753 at 325.30 mph during the second day
of testing at The Strip at Las Vegas Motor Speedway.

In one week, the Series returns for the seventh annual ACDelco Las
Vegas NHRA Nationals, Oct. 25-28, the first of two final races that
will determine the 2007 POWERade Series world championships.

“We tested clutch parts, blower parts, injector parts and we evaluated
all day yesterday and today,” Beckman said. “We kind of picked the best
combination and picked away at it. We want to make those four who are
still in miserable. We want to win these races and make an exclamation
point at the end of the year.”