Clay Millican and SPEED TV are looking for feedback on Clay's new Blow It
Up TV program airing at 10 p.m. Sunday nights. The series began last Sunday.
Anyone interested should send it to [email protected].

Drag racer turned Speed Channel analyst Johnny Rocca will be on camera
at Summer Thunder V in Purcellville VA this Saturday July 28 starting
at 3:00PM. Rockville, MD’s 3AM Studios, who are well acquainted with
filming automotive events, will be taping a TV quality DVD of this
years show.

Those of you familiar with some of the Speed Channel’s programming have
seen the shows that are filmed at car events all over the
country. Johnny will be the Summer Thunder’s Don Garlits, Dennis Gage
and Barry Meguiar all rolled into one. Johnny is an internationally
know racer and Gear Head of the 1st degree. Rest assured, if any one
can handle this task it's Johnny Rocca. 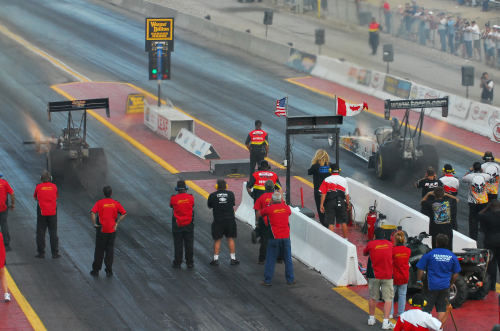 It took almost ten years to do it, but
Scotty Cannon said the wait was worth it. The six-time Pro Modified world
champion who graduated to nitro racing in 1999 scored his first career Top Fuel
crown at the IHRA Mopar Canadian Nationals in Grand Bend, Ont.
Just to think, less than three months ago, Cannon was sprawled
across an operating table undergoing surgery to repair a damaged disc. Today he
exited the Evan Knoll-owned, Seelye-Wright-sponsored dragster as if he was
running a marathon.

Although few drag-racing fans got to see the improvements Friday because the first two qualifying sessions were rained out, Pacific Raceways has a few new features to show off this weekend.

Doug Greenfield, new general manager of the facility that will celebrate its 50th birthday next year, said a number of program are in the works, with even more to follow in their 5-7-year plan. “We’re making changes like you wouldn’t believe around here,” he said.

Capps, Fuller and Connolly clinch berths in the Countdown playoffs 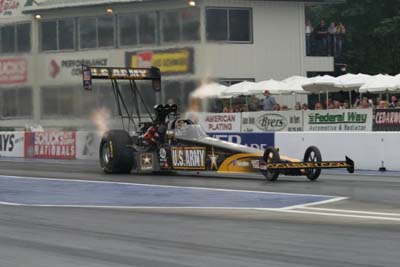 "Fast Jack" Beckman made it two wins in a row in Funny Car when he
defeated John Force in a final round that concluded with Force's
Castrol GTX Ford in flames but, other than some singed paint, he was
okay.

Connolly climbed back into the winner's circle and ended Allen
Johnson's bid for not just a second straight win on the Western Swing
but also his second straight in Seattle with the quickest pass of the
weekend. 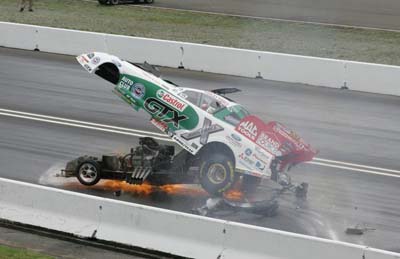 Ashley Force followed her father down the track in the second pairing
of Round 2. Right after he advanced by defeating Tony Pedregon, the
14-time champion praised his daughter’s progress but said that every
run provides a learning experience. He alluded to the rookie’s
accomplishments but joked, “It took me 30 years and I still suck!“ 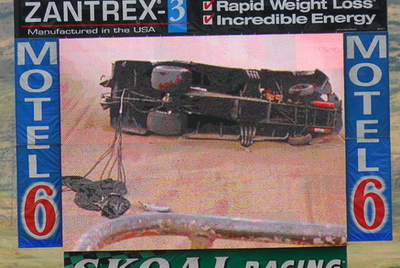 During
qualifying in Denver, Jerry Tolliver’s Rock Star Toyota went off the end of the
racing surface and ended up on its side in the sand trap. The team
replaced the already heavily used and visibly repaired body with a
fresh shell for eliminations, and that would have been the end of the
story but for what took place the following morning.

Tolliver’s crew left the now even more damaged body on the ground in
the pits with no note or written notice of any kind affixed to it. As
far as everyone who saw the body is concerned, it had been left for
scrap. If, as Tolliver’s people are now suggesting, a shipping company
was to pick up the shell and return it to Roush Engineering for
repairs, there was no note attached to the remains to that effect. In
other words, there was nothing left with the body that would have
stopped a track clean-up worker from picking up the remains with a
forklift and depositing it in a Dumpster.

Sunday's final results from the Mopar Canadian Nationals presented
by Castrol at Grand Bend Motorplex. The race is the fifth of 11 in the
$19.5 million 2007 Knoll - Gas Nitro Jam Drag Racing Series: