The city of , is quickly learning that life with a strip
can be a drag. According to a report in the Charlotte Observer, the city has
reversed its opposition to Bruton Smith’s drag strip on the grounds of Lowe’s
Motor Speedway.

Smith said on "Tony
Stewart Live" on Sirius NASCAR Radio, "So now they've decided maybe
they do want it.

"One day we will look
back at this, I hope, and we'll all laugh about it," Smith said. "But
in the meantime, when I get home I will take a look and read exactly what
they've done and try to diagnose the whole thing."

John Cox, head of the
Cabarrus Regional Chamber of Commerce, said the move is exactly what Smith’s
company wanted.

Mayor Pro Tem Jim Ramseur admitted
that even this reversal couldn’t guarantee that Smith will keep the racing
facility in .

Jack Beckman can testify regarding the emotional complexities surrounding the
NHRA’s first year of the Countdown to the Championship format. He was eliminated
from championship contention after the semi-final round in Richmond.

“We
came in here [Richmond] and it was like a story book,” Beckman said. “Capps and Scelzi both
got in and that’s exactly what we wanted. We really would have liked to have
seen both cars in. You never root against your teammates unless they are in the
other lane. We all three got past the first round and we needed to beat Bartone.
We had lane choice and didn’t get the job done.

“It’s one thing if we
went out and knocked the belt off of it or kicked the rods out, then that
becomes a mechanical issue. The thing made a big move towards the wall and I
needed to wrestle it back over and didn’t get it done. It hit the rev-limiter
and spun.

“I don’t know what cost us the race. It stinks. So we had a
chance? Now we had to sit and watch, but the question then begins, who do you
cheer for?”

“The only time I ever bet against Capps or Scelzi is when
they are in the other lane. You want them to win, but you know if they make the
final round it will knock you out. It’s devastating. It’s not just me because
there are ten other guys whose livelihood to make that car run as good as
possible. They have given me a great a car and great momentum. There are eleven
disappointed guys out there including me. You always want to control your
destiny and to sit and watch it unfold for two rounds. It’s tough to put a good
spin on this right now.”

Tony Schumacher will start from the No. 1 position in the Technicoat
Top Fuel Shootout on Oct. 27 during the seventh annual ACDelco Las
Vegas NHRA Nationals at The Strip at Las Vegas Motor Speedway. The
all-star race-within-a-race bonuse event, which awards $100,000 to the
winner, showcases the eight Top Fuel drivers who accumulated the most
qualifying points during the 2007 Technicoat Top Fuel Shootout series.
The series began with the 2006 ACDelco Las Vegas NHRA Nationals in Las
Vegas and ended at the 2007 Torco Racing Fuels NHRA Nationals at
Virginia Motorsports Park near Richmond, Va. this past weekend. Other
racers who have earned a position in the Technicoat Shootout include
three time winner Larry Dixon, 2004 winner Dave Grunbic, three-time
runner-up Cory McClenathan, 2002 runner-up Brandon Bernstein, 2006
runner-up Rod Fuller, Melanie Troxel, and J.R. Todd.

Ron Capps admitted that he felt like
a broken record throughout the NHRA Torco Race Fuels Nationals race weekend when talking about his championship
chances with the ESPN2 crew.

“This is the most important round of my
life,” Capps told them before he made his Saturday qualifying run.


Capps was unqualified and got into the field as the 15th qualifier.


“We needed to get in to have a shot and then I found out I had to run Robert
Hight in the first round,” Capps said.

When teammate Gary Scelzi
qualified eighth, it put him into a tie with Capps unofficially since points are
only made official at the completion of an event.

Once again Capps
said it.

“This is the most important round of our life – if we don’t
win – our season is done,” Capps repeated.

Then Jack Beckman lost in
the second round to Tony Bartone. The only way Capps could entertain
championship thoughts was to win the semi-finals.

Capps was on the
losing end of a tiebreaker with Scelzi, which meant all of the pressure was on
him.

To car folks, Cacklefest is the sweetest sight and sound in the world: 40 or
more vintage dragsters fire up and "cackle" 10 gallons of nitromethane fuel
in less than five minutes. The sound of that exploding nitro will be music
to the ears of thousands of fans at fabled Auto Club Famoso Raceway, near
Bakersfield, Calif., on Saturday night, Oct. 13, as Cacklefest once again
roars at the 16th annual at the Automobile Club of Southern California Hot
Rod Reunion, presented by Holley. The Reunion runs from Oct.
12-14.

"A Cacklefest is like a barely controlled atomic bomb," said Greg
Sharp, curator of the Wally Parks NHRA Motorsports Museum, producers of
the Reunion and the man who coined the term back in 2000. "That
exploding nitro cracks like a gun shot and shoots header flames into the
night sky. It's a sight to behold and people love it," said
Sharp.

Among drag racing fans, Cacklefest is now a common word. Perhaps
Webster's will add it in the dictionary soon. There's even a
www.cacklefest.com.  This year, according to Sharp, more than 50 cars (a
Cacklefest record) will push-start their early-style front-engine dragsters
like they did in the 1950s and '60s, then line them up down the center of
the drag strip at Famoso with the headers glowing and the motors running
or 'cackling.' 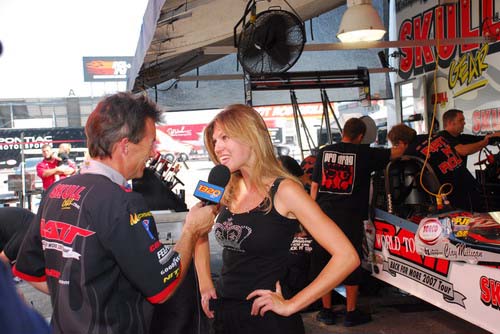 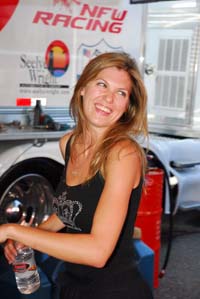 Jesse
Harris, known for her exploits behind the wheel of the Queen of
Diamonds jet dragster, began licensing runs yesterday in Richmond, Va.,
behind the wheel of Evan Knoll's Ratt Tribute dragster normally driven
by Clay Millican. Millican was her instructor during the day and gave
her rave reviews. This was her first experience behind the wheel of a
nitro-burning vehicle.

Sources indicate that Harris coulod join
the a prominent team, but according to those close to the situation such a
deal is nowhere close to being completed.

"Monday was just testing, I don't have a deal yet," Harris said. "I have to continue to go out
there and prove myself both on and off the track.  But, I can tell you, after Monday, I know I was born to drive these cars."

"We've been a part of Terry's
alcohol team for a long time," said Roy Griffith Crane Representative. "Being a
part of what Terry and Doug are doing really makes sense for Crane
Cams."

Team owner and driver Doug Foley is also excited about the
relationship, "Having Crane Cams behind our team gives us added confidence. In
top fuel we're always pushing for more horsepower and speed. That's something we
know Crane will give us an advantage on come race day."

Doug Foley
announced that he was planning a full-time NHRA POWERade tour in 2008. However,
the NHRA and their Top Fuel contingent didn’t pay much attention.


Nevermind the fact that he’d nearly won an IHRA championship and only a
serious crash and injuries sustained prevented him from that.

Foley
came out and qualified top-half twice in the last five events. Still there was
no recognition for the third-year Top Fuel dragster driver who runs a drag
racing school in New Jersey.

Sometimes a driver has to jump up and
slap down a Countdown to the Championship finalist to get their attention. Foley
not only took out Hot Rod Fuller in the first round, but also knocked down
Brandon Bernstein in the second round to claim his fifth semi-final finish in
twelve outings this year. He also has a quarter-final to his credit.

For 21 out of 23 races in the 2007 NHRA POWERade Drag Racing Series, Mike
Ashley, driver of the Torco Race Fuels Dodge Charger R/T was in contention for
the Funny Car championship, but his hopes of winning wining it all were dashed
after a holeshot loss Sunday in the Torco Racing Fuels NHRA Nationals at
Virginia Motorsports Park in Richmond, Va.

Entering Sunday's
eliminations qualified third, Ashley was paired against No. 14 Tim Wilkerson in
the first round. Jockeying to be in the top four in order to go on to the final
round of the Countdown playoffs, Ashley had to win just one more round than
either Ron Capps or Gary Scelzi. After watching Capps take out powerhouse Robert
Hight and advance to round two, the pressure was on the native New Yorker to
pull off a win in order to stay in the hunt.

The race was ultimately won
by reaction time, with Wilkerson posting an .077 to Ashley's
uncharacteristically slow .120, and despite Ashley having the quicker time in
the quarter-mile at 4.866 seconds, Wilkerson reached the finish line .033
seconds before Ashley, taking the win with a slower 4.876 seconds.

"Of
course, I'm extremely disappointed, because we had the car to beat today,
there's no doubt about that. Brian [Corradi] and Mark [Oswald, crew chiefs] had
this Torco Dodge dialed in, and the numbers proved it. Both Saturday and Sunday,
we ran the quickest times of all the Funny Cars," Ashley
said.

TONY PEDREGON - "SLOW THEM DOWN"

ony Pedregon
isn’t one to show fear but the recent manifestation of problems related to Funny
Car safety has him concerned to the point he wouldn’t be opposed to slowing the
class down. 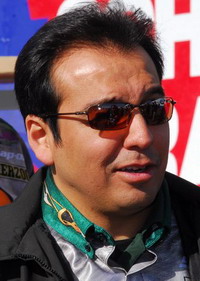 “I know they have addressed the
chassis that it should stay intact,” said Pedregon. “I know [chassis builder]
Murf McKinney and all the teams are working together – it is great to see. When
I get into this car, I hope it isn’t my turn for something to be on the track or
something to create a tire failure – not a tire failing – something has to cause
that tire to fail.

“For the first time in my life I
left my house and made sure my insurance was taken care of and told my wife to
make sure my will is intact. That’s pretty scary. I want to be safe. But, I
don’t think there is enough done to make sure these cars don’t run 330. These
cars shouldn’t run 330. I think they should run 310 or 315. I think that’s
something the NHRA needs to handle. They will come up with a lot of reasons of
why not, but they need to give reasons why. I think there are more pros than
cons.”

Pedregon said he’s aware that
Goodyear has taken a lot of blame for nitro racing’s problems. But, he said,
maybe the sport needs to look elsewhere.

“There is still a problem that
exists and it is not Goodyear’s problem,” Pedregon said. “Goodyear has made a
tire that can withstand the speeds and the downforce that these cars make –
330-something miles per hour, they have done their job. You cannot ask them to
do more than they have already done. I think that NHRA needs to make the tough
decision like NASCAR did and slow these cars down.”

Pedregon said he wouldn’t begin to
pinpoint a single problem, but he said he’s sure if it’s investigated thoroughly
enough – it will be discovered.