NO NEW CAR BLUES FOR BERNER

"It was going to be tough to make a better car than the Pontiac GTO, but the
folks from GM Motorsports and Quarter-Max Chassis have done
it."

This statement comes from Pete Berner,
hot off his first time out with the new Quarter-Max.com Pontiac GXP. The team
tested last week at South Georgia Motorsports Park in Valdosta, Georgia. The new
Pontiac GXP proved itself a Championship worthy car in its maiden voyage. Berner
was able to test two different motors, one of which was the same Jon Kaase
engine that put him in a closely contested battle for the '07 Pro Stock
Championship. Berner ran a best elapsed time of 6.30 at 223.21 mph during the
test session. He is thrilled with the results.

SRAC was formed in December to provide a means for discussing
and evaluating rules and regulations pertaining to Sportsman racing at
NHRA events. The committee consists of Sportsman drivers, crew chiefs,
and team owners and is divided into five subcommittees: Top Alcohol,
Comp, Super Stock-Stock, Super Comp-Gas-Street, and Top Sportsman-Top
Dragster. Each subcommittee has one representative from each NHRA
division. Hullinger has been appointed as the overall committee
chairman, and Lang serves as the secretary. The other division
directors also play integral roles in SRAC, serving as chairpersons of
each subcommittee.

BOBBY REX ON THE MEND

Former Top Fuel owner and crew chief Bobby Rex was rushed to a San
Antonio emergency room earlier this week to be treated for a tear in
his esophagus. After blood transfusions and a five-day stay in the
hospital, he is back home recovering and doing well. Cards and letters
may be sent to 219 Coral Avenue, San Antonio, TX 78223.

ALLEN JOHNSON MOVES UP IN STANDINGS

Allen Johnson continued his solid start to the 2008 NHRA POWERade Pro
Stock season, advancing to the quarterfinals at the NHRA Gatornationals
on Sunday and moving to the fourth spot in the NHRA Pro Stock points
standings.

Johnson seeded his Mopar/J&J Racing Dodge Stratus R/T fifth on
Saturday, after Friday's round of qualifying was cancelled due to rain.
AJ defeated Dave Northrop in the first round, overcoming a shaky
reaction time off the starting tree to drive his HEMI-powered Stratus
R/T to the round win by more than a car length. In the quarterfinals,
Johnson bettered his reaction time, reeling off a near perfect light of
.003 seconds—only to see his opponent, Mike Edwards, earn a perfect
.000 light and score the round win. 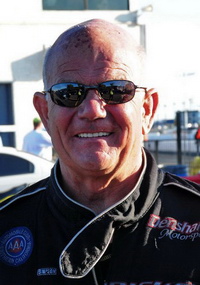 Gary Densham may be racing on limited funds but he's having a lot of fun.

sponsored
driver. This experience has been a lifesaver for the Bellflower,
Ca.-based driver whose determination drives him to compete against
teams with budgets as much as five times larger than his.

“We probably would have come out healthier financially by losing in the
first round than we did in reaching the finals,” Densham said. “This
final round appearance was a great morale booster and the crew did a
really good job. I have no reservations in saying I have the greatest
crew in the world.

“Today gave us the opportunity to showcase their talents and have some fun.”

PEDREGON’S STORY OF THE CRASH

“It’s
the eeriest thing I’ve felt in my years of driving.” – Cruz Pedregon 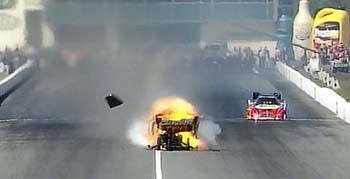 Cruz Pedregon was pulling away from Ron Capps during their first round
race at the NHRA Gatornationals Sunday morning when everything went to
hell in a hand-basket. Pedregon’s Advance Auto Parts Chevrolet Funny
Car backfired through the supercharger, lifting the body from the
chassis and sending him bouncing through the shutdown area.

Looking a big groggy, a harried Pedregon, emerged from the wounded race
car and quickly tried to assess the situation. The former NHRA Funny
Car world champion would later determine the backfire to be a blessing
in disguise.

Imagine for a moment, you traveled to your local gas station and
realized from the time you left home the price of a gallon of gasoline
had increased from $4 per gallon to $8. Imagine the reality you'd face
at the time. This fictional scenario bears a striking resemblance to
another situation developing in the high-stakes world of nitro drag
racing in the NHRA.

Last week, the official fuel supplier to the
NHRA raised the cost of a 42-gallon barrel drum $300 to $1,250. This
time last year a racer could purchase a 55-gallon drum of nitro for
$850. The price rose to $950 at the U.S. Nationals in Indianapolis. New
regulations for the U.S. Department of Homeland Security has mandated
new regulations limiting the amount of nitromethane capable of being
stored in each pit area to under 400 pounds.

How does this affect
the teams? The real affect is in the bottom line where many teams are
struggling to maintain their existence.

At least one driver said
his limited schedule will be further limited
because of this surprise increase. Unsponsored Funny car veteran Jim
Head pointed out this decision will cost him three races he’d planned
to attend. 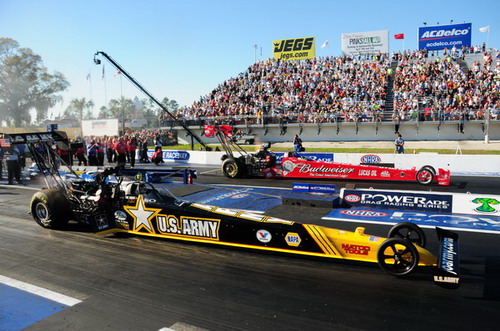 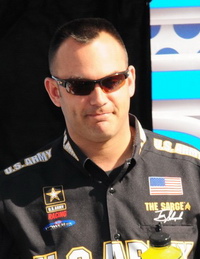 Tony Schumacher has won the Gators three times but he'd be happier to capture victory at the elusive tracks.

wouldn’t mind trading in one of his victories at the famed facility for one at a complex he’s yet to win.

“This one here, I'll trade one of those that we can't get done,”
Schumacher admitted. “I can't win a round in Englishtown.  I like those
lists.  I try not to look at them but when you put out a list where
there are only a few people or a handful of people who have won it
three times in much longer careers then that's great.” 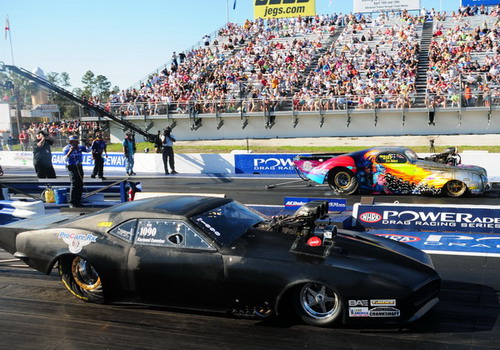 Joe Baker entered the first event of the 10-race JEGS ProMod Challenge
as a last-minute alternate after another competitor crashed in testing
earlier in the week. He barely made the 16-car field with the slowest
elapsed time in the group. He even had to race the quickest and fastest
car of the meet in the final round of the 39th annual ACDelco NHRA
Gatornationals.

In the end, none of that mattered as the local hero from Milton, Fla.,
pulled off one of the most improbable victories in the seven-year
history of the series, winning with a coasting 12.687-second pass at
63.03 mph after final-round foe Raymond Commisso hit the retaining wall
just before the finish line to disqualify himself from contention.