Sat, 2008-03-08 04:00
Due to an impressive track record and lengthy client list that includes numerous
Fortune 500 customers, organizers of the JEGS ProMod Challenge have selected
Tempe, Ariz.-based bluemedia as the Official Graphics Supplier of the 10-race
drag racing series.
Under terms of the agreement, bluemedia will provide racers with the vinyl
stickers they'll need to identify their racecars as participants in the series.

"In the last four or five years we've endeavored to get more involved in
motorsports," said bluemedia's Andy Salcido. "Our business base is really
building and we see the new JEGS ProMod Challenge as yet another avenue for
getting our name in front of more people. The contacts Scott Woodruff and Paul
LaSage have in the motorsports world are incredible and we thoroughly enjoy
working with them. This whole thing is really picking up speed lately and we're
excited." 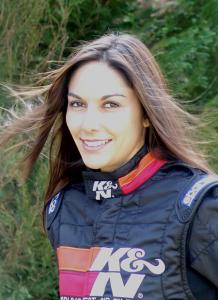 Twenty-three year old phenom Lindsey Wood added to her impressive
racing resume last weekend with a Super Comp victory at the NHRA LODRS
event at No Problem Raceway in Belle Rose, LA. For Wood, it was her
second consecutive LODRS win at the Louisiana facility, as she captured
the event title last season in Top Alcohol Dragster. A final round
triumph over former NHRA World Champion Tommy Costales marked Wood’s
ninth consecutive round win at the facility between the two classes.

Lindsey Wood, a young woman from McAlpin, FL, started her racing career
in the Junior Dragster ranks thirteen years ago. In her tenure in
junior dragster competition, she amassed one of the most impressive
records in the history of the class, including 57 bracket and index
wins and 17 heads-up triumphs. In 2003 she made the move to Super Comp
competition, and continued her success and growth as a competitor over
the next three seasons. In the 8.90 class, she captured a Gator
Nationals title, a handful of divisional victories, and earned a top
ten national finish in the ultra-competitive NHRA Super Comp ranks.
Last season, Wood jumped at the opportunity to team with the Darien
& Meadows A/Fuel Dragster team and ran a full Top Alcohol Dragster
schedule. While Lindsey and the team enjoyed flashes of brilliance,
including the ‘07 No Problem LODRS victory, the team struggled for much
of the season, and the partnership dissolved. 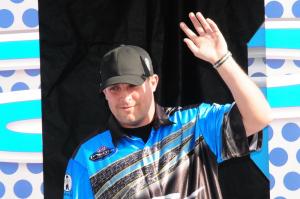 They’d
always start with a cruise toward Washington D.C. to V Street. Cars
lined both sides of the road. Then the bragging began. Stakes on the
illegal street races were raised as high as $5,000 to $10,000. Justin
Humphreys’ 1989 Mustang GT 5.0 could run a high 10 on the street, he
said.

“It had nitrous and all that good stuff,” Humphreys said. “Back when I
was young, I had 15-20 friends that all had them (Mustangs) and would
all go down there and goof off.”

Eventually police would show up and the hundreds in attendance – male
and female, of all ages – would scatter, only to reassemble down the
road.

“They’d drive five miles to Metro, and race there until the cops showed
up,” he said. “Then they’d go back to V Street and race until 1 or 2
a.m.”

NHRA has announced that three affiliated events will be added to an
already impressive 2008 Hot Rod Heritage Series schedule, increasing
the schedule from seven to 10 events.

The events to be added include the Holley National Hot Rod Reunion,
June 13-15 at Beech Bend Raceway Park in Bowling Green, Ky.; the
ACDelco NostalgiaFest presented by RM Distributing, June 20-21 at
Cordova Dragway Park, Cordova, Ill.; and Geezer’s at the Grove, Sept.
5-6 at Maple Grove Raceway near Reading, Pa.

Though the events will be affiliated with the series they will not
count as points-earning events toward the 2008 championships.


Hines blasted out a
[SGMP] track record 6.889 elapsed time at 193.13 miles per hour. This run
marked the first time Hines had been into the 6.80s with his Screamin’
Eagle-sponsored Harley-Davidson.

“We didn’t change a thing
from our earlier run,” said Hines, who previously belted out a 6.94. “I knew it
was a great run going down the track because when you don’t have to correct it,
you get the big numbers. I saw our earlier runs and figured I’d run a 6.90. I
was just hoping to run quicker than Angelle.”

Coming off a strong performance at Phoenix, Tommy Johnson and the
Monster Energy Funny Car team are excited about their prospects for the
ACDelco Gatornationals in Gainesville, Florida next weekend.

“Gainesville is one of my favorite tracks on the tour,” said Johnson.
“This track has a special place in my heart because the Gatornationals
was the first event I ever raced in.  It was 1984 and I was running
Super Gas.  There were 128 cars in the class, and we were down to six
cars, and mine broke!  I’ve been chasing a victory at this track ever
since, and this year I truly feel we have a talented team and a car
that will be right in the hunt.

“At Phoenix, I think we showed what the team was capable of.  We were
strong in qualifying and we had three very competitive runs on race
day.  I no longer have concerns about qualifying.  Now we just want to
go out and win a race.

“At the beginning of the season we set goals.  I’d like to get a win
for Kenny (Bernstein, team owner) and for Monster this season. The
sooner the better.  This team was awful close to winning more than once
last year and I’d like to help them get over the hump.  I’d like to be
in the top five at the end of the year.” 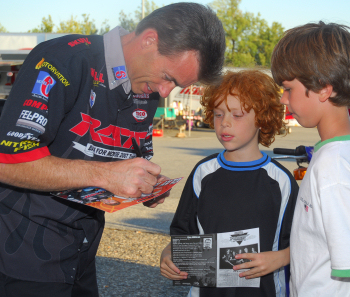 And yes, one of the sport’s most fan-friendly drivers and tough
competitors will indeed be making test runs in the ESTN, March 6-10, at
South Georgia Motorsports Park in Cecil, Ga., near Valdosta.   But
before your thoughts wander any farther – no, Millican will not be
racing in NHRA’s AC-Delco Gatornationals at Gainesville, Fla., the
following weekend.  Or any other weekend, for that matter.

“My bosses said to go test and be prepared, so that’s what we’re doing
– getting ready to test,” Millican, of Drummonds, Tenn., said Monday,
as he took timeout from helping load the hauler.

Randy Meyer's A/Fuel Dragster arrived at the 9th annual CSR Eastern
Spring Test Nationals presented by Torco's CompetitionPlus.com cloaked
in Dunkin' Do-Nuts. Diana Harker will share driving time over the
course of the weekend with Zach Beard, who will be obtaining his
license this weekend.

In a recent announcement, track
officials said there will only be reserved seating
tickets and standing room only tickets for the event.
General admission tickets will not be sold.

Ticket sales are 30% ahead of
last year through the end of February, 2008 and track
officials are looking at a possible sell-out in the second year of the race. In
fact, the track set an all-time record for ticket sales in
February.

"We have an
obligation to our fans," said Bill Bader, Jr., president
of Summit
Motorsports Park. "We want everyone coming to the race
knowing they’ll have an assigned seat. It isn't a good experience for someone to
come to the race and have to wrestle to find a place to sit down, especially
if you're with a group of friends or your family."

Series organizers have revised the points system to be used in the 2008 JEGS
ProMod Challenge to mirror the points system used in other professional-level
classes of NHRA competition. The new points system will begin March 13-16 with
the series-opening 39th annual ACDelco NHRA Gatornationals at Gainesville
Raceway.

The points per event will be awarded as follows: