WJ STARTS ON HIS BONNEVILLE CONQUEST 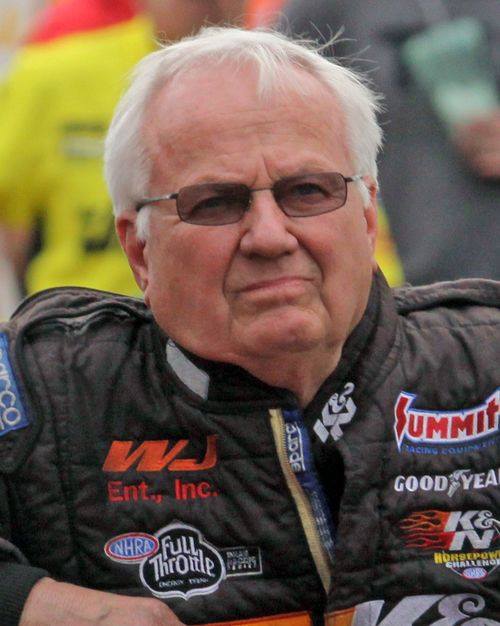 Warren Johnson has had some ambitious projects in his storied career, but the one he's working on might be the king of the hill.

Johnson says he's headed to Bonneville, possibly as early as this year, and attempting to run 370 miles per hour. What really makes the project off the charts is he will try the feat with a naturally, aspirated 260-cubic inch engine built off of the LS platform. Yes, the same engine more commonly associated with 1955 Chevies in Modified Eliminator.

While Johnson admits he's over NHRA and Pro Stock to a point, he's not over the challenge to coax horsepower out of combustion engines.

Johnson says he's inclined to keep some aspects of his project secretive at this stage, including the identity of the individual who lured him to the Salts.

"A guy called me almost a year ago and he had some engine problems he was trying to resolve and whatnot," Johnson said. "I got him in the right direction on that, so it resolved his problems in that area. And then one thing led to another and I asked him how much power he’s got and he told me, and I said, ‘S***, we’ve got starter motors with more power than that.’

"It just kind of triggered my interest in it."

Johnson said he's been to the Bonneville Salt Flats, but never the traditional event scheduled in the middle of August.

"Stopped there driving across the salt flats numerous times but I have never actually gone out on the course itself," Johnson said. "I’ve been invited for the last 30 years to come drive cars there, and it’s always been right in the middle of my season and never had the opportunity to do it."

Johnson isn't sure they'll complete the project in time for the 2018 event; he's working with cylinder head and engine block expert Richard Maskin on the ambitious engine project.

Maskin, Johnson said, was a natural fit for the project.

"I needed some special parts to do the project the way I want to do it," Johnson said. "Because the confines of the area I’ve got to work within the engine bay part of it are really restrictive because this thing was originally designed for a flathead Ford."

Johnson estimates the car will make more than three horsepower per cubic inch.

"I’m re-engineering the whole car to make it right," Johnson said. "Maskin and I are going to work on the motor project and I’m going to make the car, well it’s obviously a car that’s very efficient aerodynamically, but mechanically it’s a total disaster, so I’ve got a lot of work to do."

Yes, Johnson plans to drive the streamliner.  He does have experience behind the wheel of a dragster he once piloted while at Roy Hill's Drag Racing School; an experience he described as "having had go-karts more challenging."

"We're not playing around," Johnson said. "I know exactly how much horsepower it’s going to take to do it, and I feel that we attack the project from one end to the other, it’s entirely doable."

Johnson said, a modern-day Pro Stocker,  could easily exceed 300 miles per hour at Bonneville but would need weight and more downforce.

"You’d have to put a lot of weight in it because you don’t have traction there," Johnson explained. "The weight is not an adversary there because of the fact that salt in and of itself, I don’t think they put VHT on the salt, so therefore you don’t have a whole lot of bite. So traction is, you’ve got two factors there, your aerodynamic package and traction. That’s the only factors, and then you salt in, no pun intended, the amount of horsepower that you have and that determines how fast you can go."

"It’s just something that interested me, you know," Johnson said. "I look at all forms of motorsports, you know. Every form of motorsports, the primary object is to be the best at it. Whether you go in the round track race, of course, I never did understand how you can finish where you started, but that’s a whole 'nother story. But same thing, sprint cars, sport cars, Indy cars, Anything that goes putt-putt and smells bad interests me.

"This is just something that’s in its infancy, and you know to get all those parts made is going to take a certain amount of time, and then we’ve got to start our development program for it and whatnot. This is something that is not going to happen overnight by any stretch of the imagination. I still need the silhouette of the confines I’ve got to work within the engine bay so I can figure out if I can get an efficient header in there and how much room I’ve got for the induction system.

"There’s a lot of things that really have to be packaged in this thing. It’s a proverbial thing of trying to put 10 pounds of s*** in a five-pound bag."