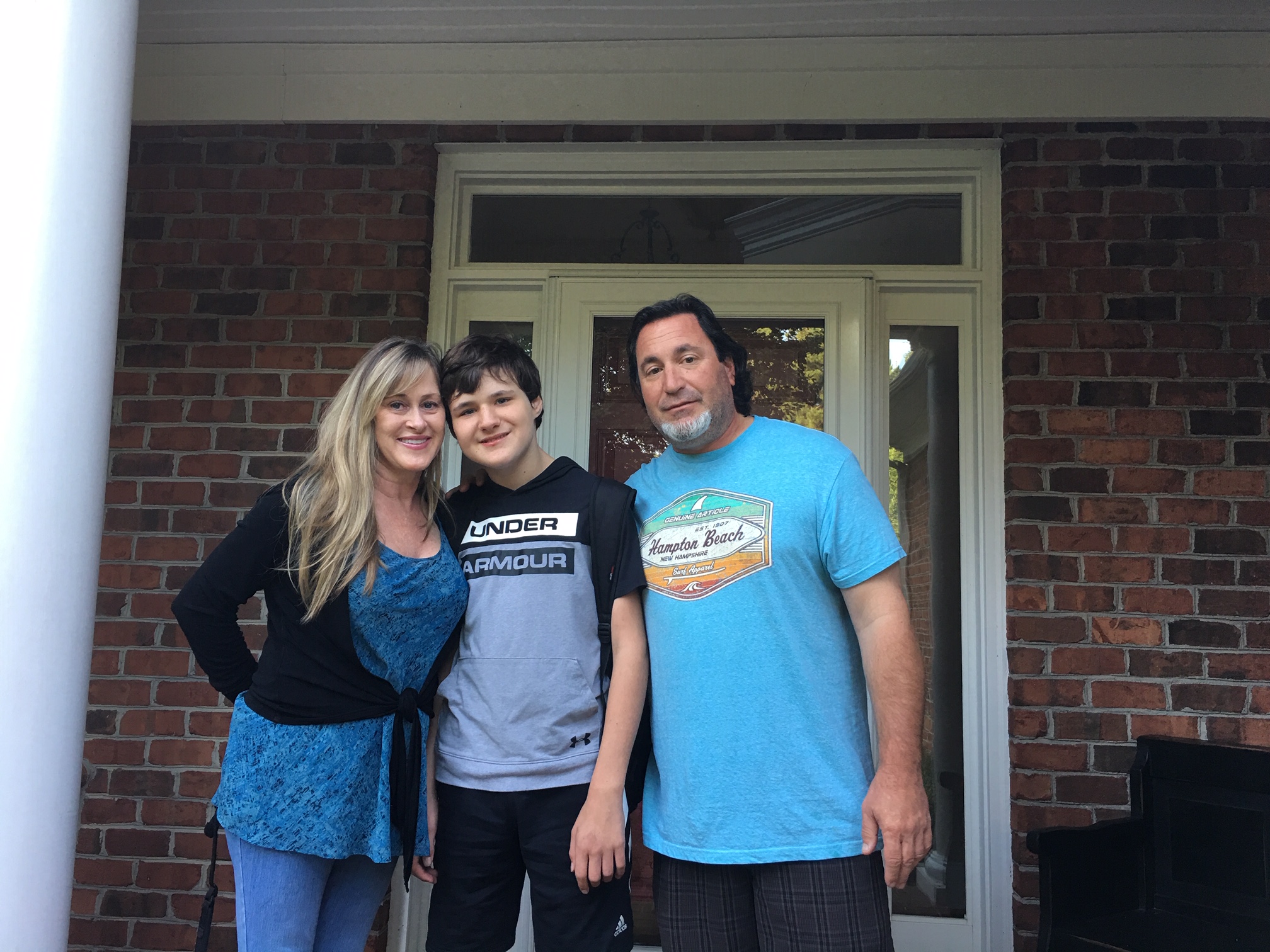 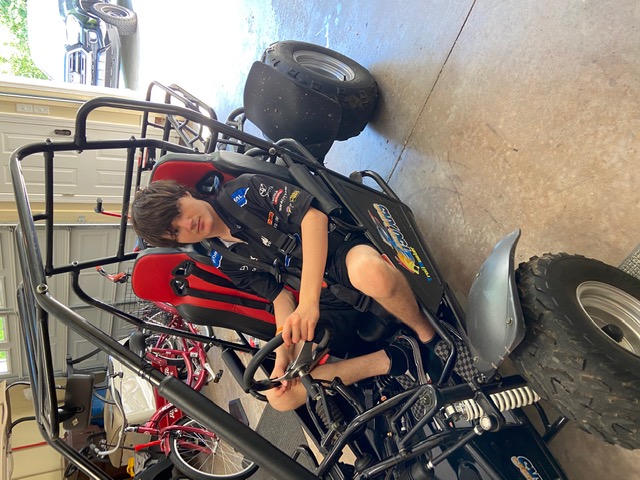 Blake is 17 years old and loves drag racing. But he's not your average teenager.

Blake has autism, a condition his parents Nicky and Sara have learned to adjust for since the initial diagnosis.

"It's definitely not like having a normal child. I can tell you that," Boninfante said. "Because he's nonverbal he uses an augmentative communication device, which is basically an iPad with a touch-chat program for him. So he can communicate with us. And our days consist of keeping him entertained with interaction."

Taking care of Blake would be considered not easy for an outsider. Still, for the Boninfantes it's a responsibility they cherish, though many times difficult to watch the situation play out.

There are mornings when Blake can have in the neighborhood of 15 of 20 myoclonic seizures, but these days those numbers have decreased substantially from the 300 or so experienced daily when he was younger.

"We moved to Colorado, so we could get him prescribed for medical cannabis (which wasn't legal in Pennsylvania), and after that, his seizure counts went down about 75% to 80% from where they were," Boninfante said. "They helped his life be a little bit more normal."

Much like a drag racer, as Boninfante explains, Blake is very dedicated to routines. Those routines, much like the rest of the world, have been thrown into disarray. 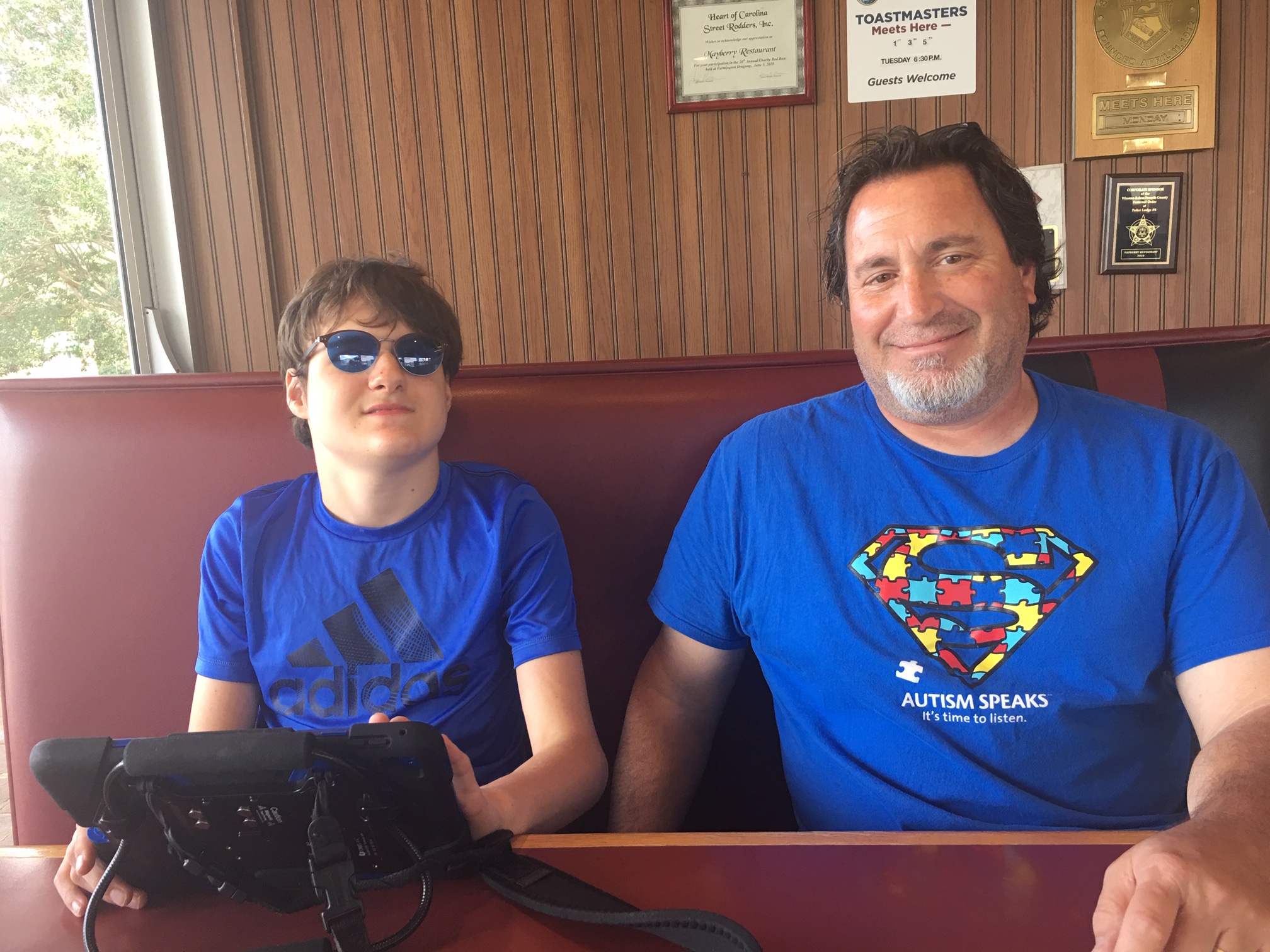 "When he gets up in the morning, we spend most of the morning with him," Boninfante said. "He has a bathroom routine. He has a breakfast routine that he goes through. And then usually, he's seizure-free in about 30 minutes. And then he can watch a video, or he can listen to music after breakfast. And basically, he would typically go to a typical school, but then COVID-19 came in and we all got stuck in our houses. All his little routines that he had just like all of us, really changed.

"It's tough to explain to him why he can't go to school. Why Blake can't ride the bus home from school, why he can't see his teachers, and then he's got to learn a whole new routine that he's had for years."

If there's a silver lining in a dark cloud of drag racing being put on hold, Boninfante believes being at home has been a blessing.

"While I've been home, we've been able to spend a lot more time with him," Boninfante said. "He did virtual lessons with the school, and then his day gets broken down pretty good. He gets medicine three times a day. And because we couldn't do our normal thing, like go to the grocery store. He likes to go shopping. He likes to go to the mall. He likes to drive his go-kart with me; it's a two-seater. He likes to FaceTime with his friends, and one of his friends is Jon O [Oberhofer]. So we FaceTime some of his old teachers and friends." 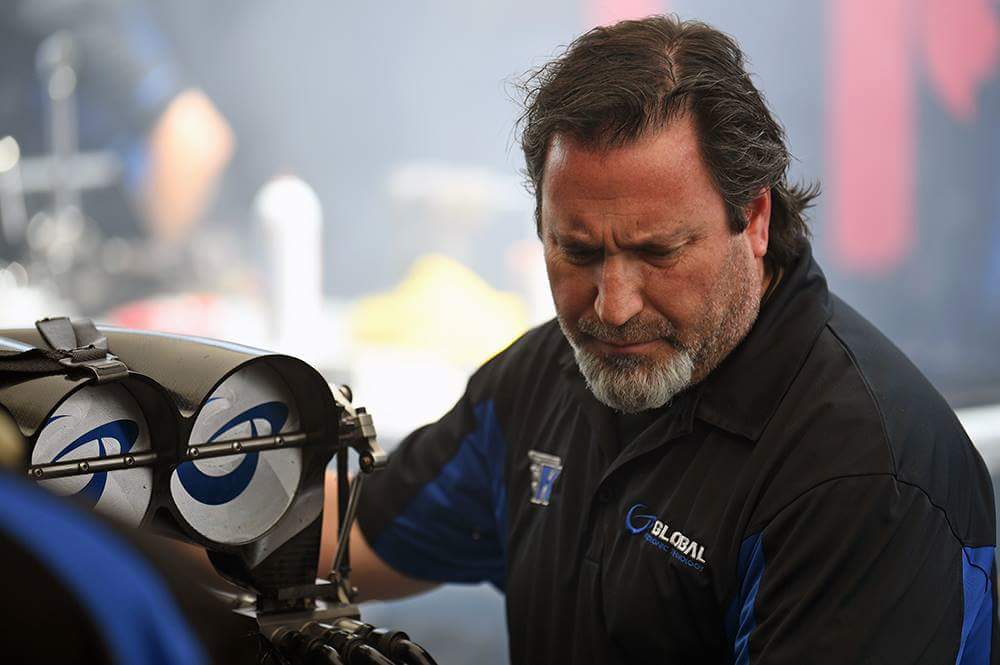 Boninfante has been immersed for the last 17 seasons on the road with drag racing, and Sara has been the driving force behind Blake's care and daily regimen. When he was home from the road, he jumped right into the daily care. The couple had been able to bring in assistance from time to time.

However, just because he was on the road thousands of miles away didn't mean that Boninfante's mind and heart weren't at home with his wife and son.

"When we found out Blake was autistic and we struggled through trying to learn how to deal with it and what it entailed. Probably, right off the bat, we didn't know what to do," Boninfante admitted. "It was like, well, you're not going to be home. What do we do? How do we do this? And it's hard to deal with when I'm away because I feel like Sara has got everything in her hands and if I don't have enough help for her, and she doesn't have enough help from whether it be family or friends just to get a break.

"If I'm gone for four days, it's just her having a break to breathe or to maybe work on a grocery list and take him shopping. Well, now she's doing it online, and it just makes things a little bit harder."

The NHRA Mello Yello Drag Racing Series is slated to return to action in two weeks in Indianapolis with back-to-back events followed by an ambitious schedule continuing in August and running consecutively until mid-November. 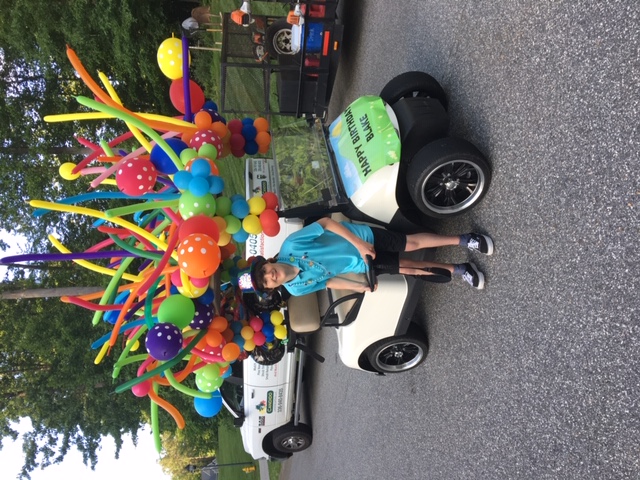 Boninfante has made the most of the activity-laden opportunities with Blake.

"He likes to have fun and laugh," Boninfante revealed. "We just hang out. Sometimes me and him will spend two hours out in the garage, just messing around, not really doing hardly anything. He likes to like load the golf cart up with a bunch of junk and then go ride. Just stuff that he likes to do that's kind of different from normal kids, but it's what he enjoys. And we share that time together."

"He loves it right now, and he didn't in the past," Boninfante explained. "A lot of autistic kids don't like the noise. So when Blake was little, we took him to the track, and we didn't know that the noise bothered him. So the first time when he was two-years-old, he heard this noise, and the car started up or drove by. He started crying, and he just cried for hours. We didn't know what was wrong. So as times progressed, we brought him to the drag races, kept his ear mufflers on and let him watch the races on TV.

"As he's grown, he's started to get more interested in drag racing and cars, and he would watch the race on TV. He'd get to see me. He gets to see Jon O on there; he'd see Del [Worsham] and at the time and he's started to enjoy it.

"We took him to a few more races. We had stopped for a while, and we took him to a few races. And when we got them to the races in 2014, we took him up in the grandstands at zMax Dragway. And he actually was able to sit there on a Monday and watch a few cars go down the track. But then he didn't want to watch anymore because it was too loud or it scared him. So then we went down to the pits, and the Laganas, Bobby and Dom, had their dragster out, and we went over there, and he was looking at the car."

Then the Lagana brothers went into uncharted territory with Blake. They let him sit in their Top Fuel dragster. 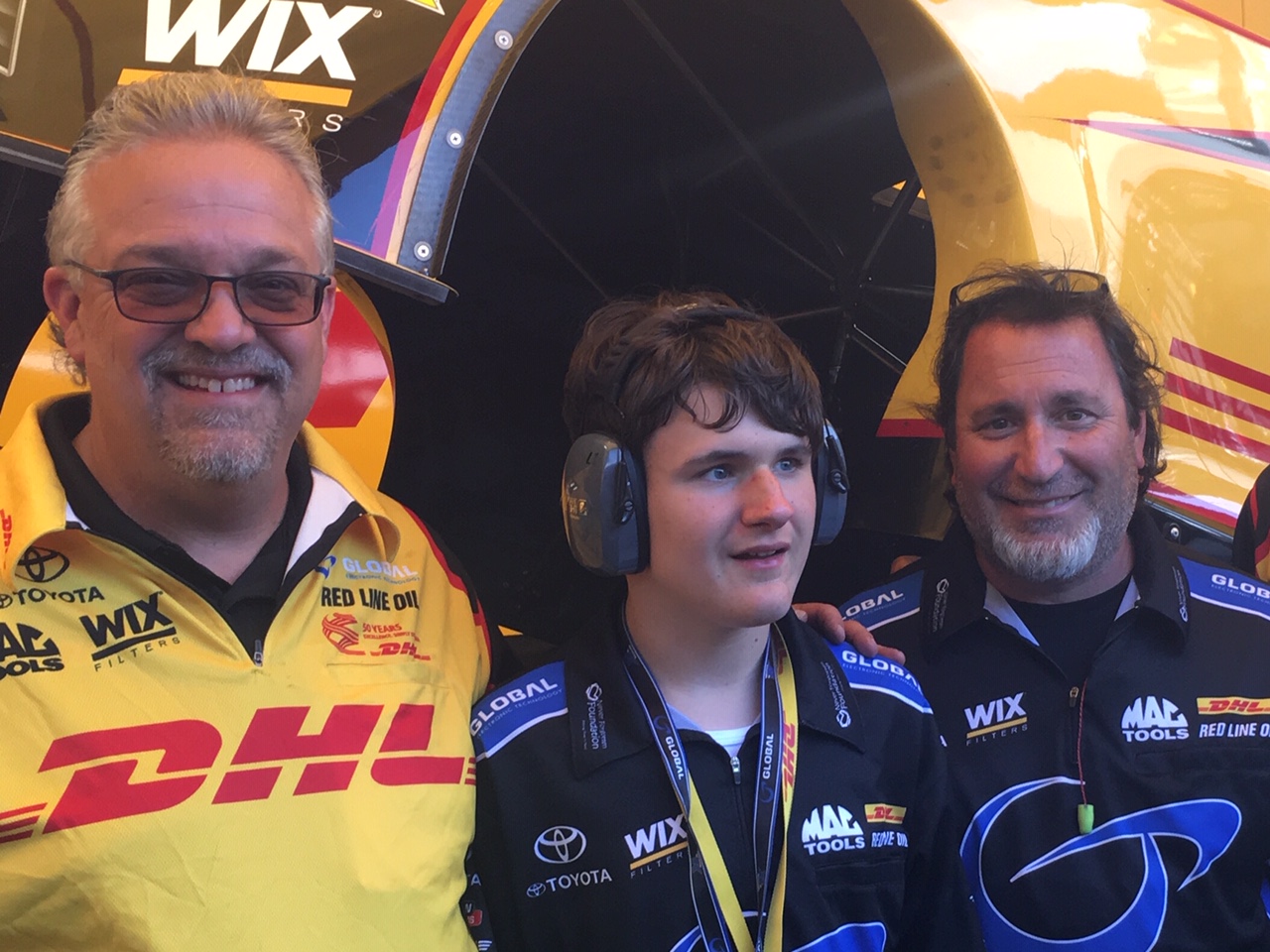 "Before that, he would never get in a car. We tried putting him in the DHL Car. He wouldn't get in," Boninfante said. "From that point on, he got to sit in that car and then he started coming to more races and the more races he came to the more he liked it. He gets blocks of time during the day where he can watch YouTube and do his own thing for let's say 30 minutes or 15 minutes. And he watches either the West Palm tests from years ago with the DHL car running all the time. And he loves funny cars, and he'll watch like nostalgia races. He loves to watch the Bakersfield March Meet. He's really into warm-ups. Blake will watch the same video 100 times like over and over. And that's all he wants to watch."

Boninfante said Blake has even progressed to being in the pits when the team has fired a car. Last year Blake sat with a smile on his face as the Global Electronics team warmed the Funny Car.

"I think with autistic kids, everything's a process," Boninfante said. "You got to learn along with them because nothing's really normal. There's definitely nothing normal about having an autistic kid. And it's not that it's bad, it's just different."

Boninfante admits in the first days, he wondered if he or Sara could handle the experience. Nowadays he couldn't imagine life any other way.

"We didn't know what to do in those early days and didn't know if we could ever do it," Boninfante admitted. "We tried a lot of different things, different types, whether it be like programs to try to learn about autistic kids. Sara did tons of research. I did as much research as I could, mostly when I'm sitting there on an airplane or sitting in an airport. We tried to learn as much as we could because we never thought we have to deal with something like this. And for a while, it's just like anything, you kind of go, "Well why us, or why me? What am I going to do?" 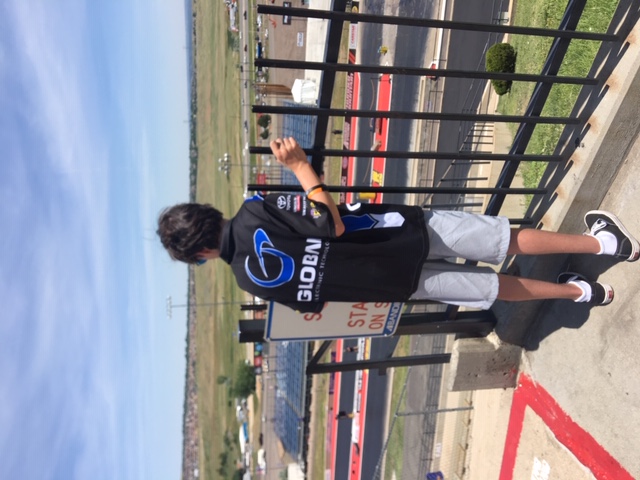 Boninfante said he doesn't have to search hard to see how the experience of being blessed with an autistic child has made him a better person.

"When I was growing up, I took health and life and things like that kind of for granted and just day to day activities," Boninfante said. "Get up and go to work and work all the time. That's the way my dad raised me and my dad was a tough guy. He was raised old schoo, Italian and grew up in Philadelphia. He didn't have a soft bone in his body, and I was kind of along those lines, and so is my brother.

"I think, as I got to realize that we take a lot of things for granted, just like getting up in the morning and being able to put your clothes and your shoes on and do all that stuff yourself. Like, we take it for granted. You walk outside, you can get in your car and drive off, and you can go on an airplane, and you can take care of yourself, and you can make your own meals and do your own thing. Blake cannot do these things so easily.

"When you have a kid like Blake, you'll learn a whole new way of life, and you learn a whole new thought process, and you realize deep down inside number one, we're pretty lucky to have a kid like Blake. God chose us to be able to have a son like him. And there are always reasons behind that. So you try to wonder, why did this happen? What's the significance of it. And I didn't know for a long time, but I know that it made me a better person. It made me look at things in a completely different way."

"I think that people just need to realize that what we have is special and for me, there are days when I'll get down in the dumps, maybe the car smokes the tires. And I'm kicking myself in the ass. Del and I are sitting there, and we've got our head down on the desk, and we're mad. And then I started thinking about Blake, and I'm like, "Man, hell. This is nothing. This matters but tomorrow's another day. And there's another race, and we'll win."

And as Boninfante and Sara see it, they've already won with Blake as their son.