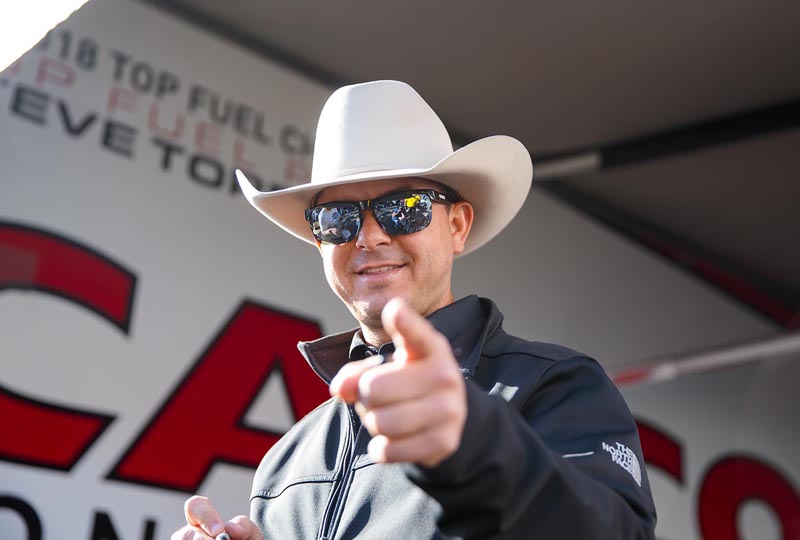 Reigning NHRA World Champion revealed a marketing partnership with Las Vegas-based BEX Sunglasses, LLC, which will begin with next week’s 55th annual Auto Club of Southern California Finals at Pomona, Calif., and extend through the 2020 season.

Established in 2009, BEX is one of the world’s leading product design and eyewear brands.  Chosen by customers for its superior comfort and affordability, it is considered the professional standard in lightweight eyewear.  BEX Sunglasses are engineered to stay comfortably on the face, complementing any active lifestyle.

“We’re very excited to be associated with Steve and the Capco Contractors race team,” said Jason Adams, founder, and president of BEX Sunglasses.  “Steve pursues the kind of active lifestyle for which we created our product line.  So, whether he’s riding, roping or racing, we’ll give him the premium durability and optical clarity worthy of a World Champion.”

Torrence, the dominant driver in drag racing’s signature racing category with 28 wins over the last three seasons, moves almost as quickly off the track as he does on it.  When he’s not bidding jobs for Capco, a family-owned, Texas-based oil and gas pipeline construction and maintenance company, he can be found hunting, fishing, calf-roping or just sharing a pickup ride with his dogs, Cuatro and Bosque.

“It’s a privilege for me to be affiliated with a company like BEX that believes in the same things that I do,” Torrence said.  “Their products are a perfect fit for me and the Capco Boys.”

In addition to its core business, BEX is one of the fastest growing companies in the sale of apparel and active accessories, offering men’s and women’s product lines that appeal to performance, outdoor active and lifestyle consumers.

As an immediate benefit of the new partnership, race fans can score a pair of BEX sunglasses at a 10 percent discount by accessing the company’s website at  https://www.bexsunglasses.com/ and using the promo code TR10.

Billy Torrence is 61 years old. Brandon Welch is 36. But Torrence is a fellow Top Fuel team owner and driver Welch can relate to. - CLICK ON LINK BELOW TO READ FULL STORY - #DragRacingNews #nhra - https://t.co/Mo4K0ek4KS pic.twitter.com/KD4F14xH1R