TOMMY JOHNSON PICKS UP WHERE HE LEFT OFF BEFORE SEASON SHUTDOWN, ROCKETS TO FUNNY CAR NO. 1 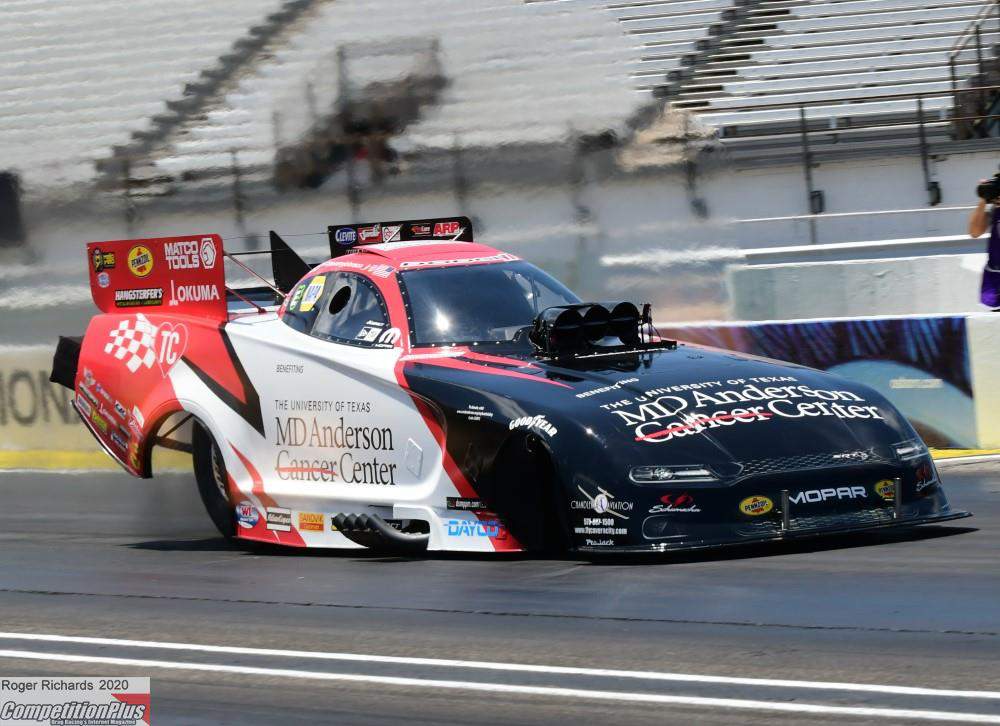 Tommy Johnson Jr. was riding high back in February.

Coming off of a win in Phoenix in just the second race of the season, Johnson felt he was in a perfect position to potentially have a career year in his MD Anderson Cancer Center Dodge Charger SRT Hellcat Funny Car.

And then the pandemic hit.

With racing on the backburner, Johnson went to work around his house. He remodeled his kitchen. He redid his basement. He built a pergola. He worked in his garage nearly every day. He did whatever he needed to do to pass the time and not think about racing.

But he never lost that feeling that this year might be special.

On Saturday, nearly five months after the sport was sidelined, Johnson returned to the track and picked right up where he left off, rocketing to the top of the Funny Car charts at the E3 Spark Plugs NHRA Nationals at Lucas Oil Raceway.

“To be back out here this weekend and get to do what we love to do and, on top of that, take home the No. 1 qualifier, that is pretty special,” Johnson said. “We didn’t lose any momentum. We picked up right where we left off. It’s nice to know that over the past four months we didn’t really lose anything and everybody has stuck together on this team and come out swinging today.”

Johnson was fastest out of the gate with the quickest pass of Saturday’s two qualifying sessions in Q1, putting down a 3.983-second pass at 317.72 mph in his Don Schumacher Racing-backed Funny Car.

Notably absent from Saturday’s qualifying sheet was 16-time Funny Car champion John Force and defending class champion Robert Hight of John Force Racing. The team did not make the trip to Indianapolis this weekend and have been mum about the future of the team for the remainder of 2020.

While many of the teams faced an uphill battle in restarting the season, Johnson’s team didn’t miss a beat in earning his 19th career No. 1 qualifier and third at Indy.

“It just shows the quality of team we have and how focused they are in what they’re doing,” Johnson said. “It’s tough for everybody out here. It was really disappointing for us because we did have that momentum going and we wanted to continue it while you can because it doesn’t always happen. And it’s very, very enlightening to see that it comes back after four months off.”

Johnson attributed much of his success on Saturday to a test session held one day prior at the track. Johnson got in two runs on Friday, but it was enough to give the team the needed data to earn the top spot in the season's reboot.

“I think the No. 1 qualifier is definitely because of what we did yesterday,” Johnson said. “We had issues yesterday. The very first run on a brand new body I hit the throttle on the burnout and the chute fell out. That would have been Q1 today. And then we would have been down to one run and we had a controller issue with the management controller and that would have been Q2. We probably wouldn’t have made the field. So we are thankful we got those two runs in yesterday. We learned enough to make it right for today.”

While Johnson’s team figured things out quickly on Saturday, other teams were not as lucky. Johnson’s DSR teammate Ron Capps had trouble on both of his runs and finished with an afternoon-best of only 4.555, good enough for 16th on the ladder. Thanks to that gap in performance, the two Funny Car veterans will square off in round one on Sunday.