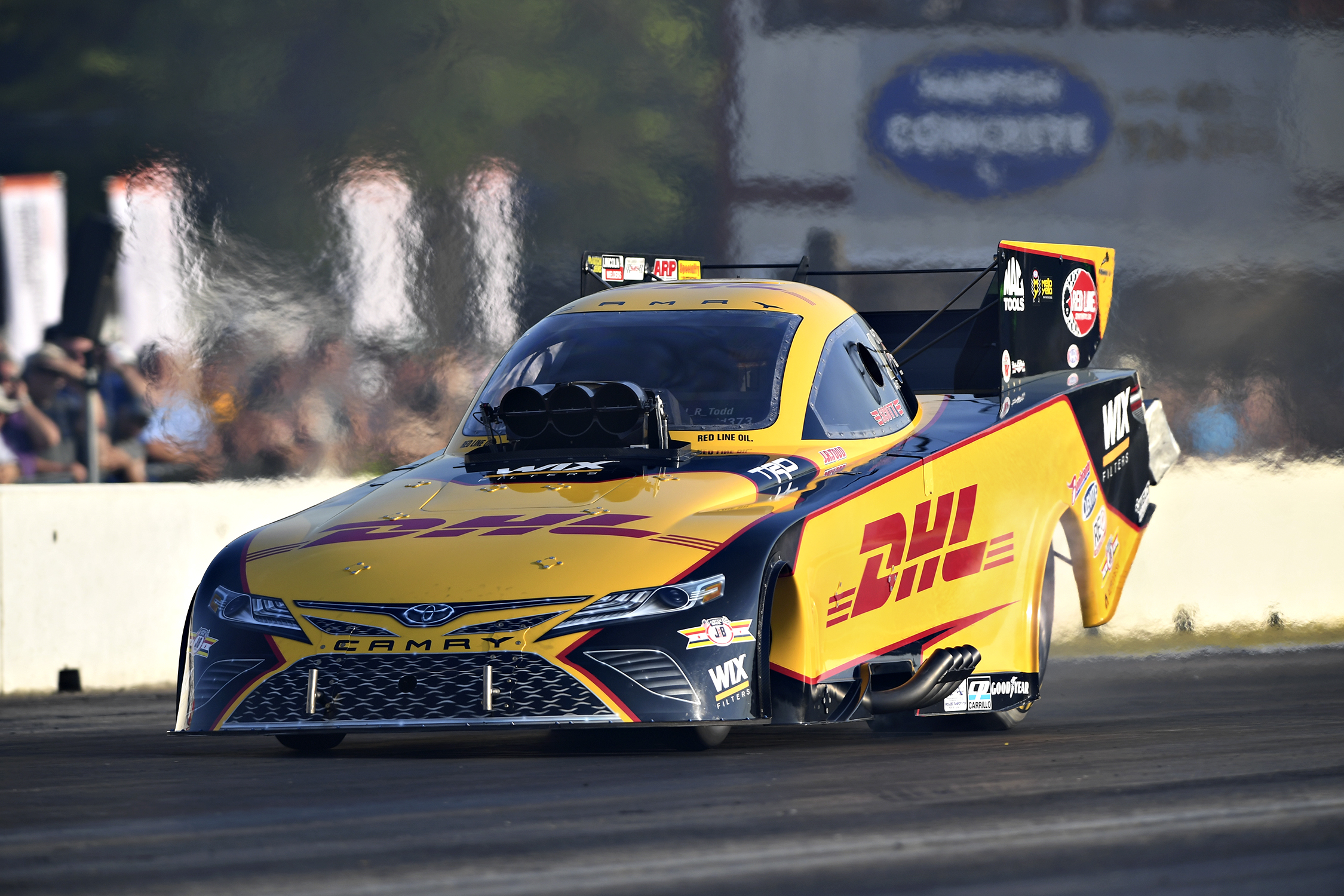 Todd is aiming to capture his 12th career No. 1 qualifying spot and second this season. He also was No. 1 in Topeka, Kan., earlier in the year. Todd has one race win this year at Las Vegas and he was runner-up at Phoenix and Richmond, Va. He arrived in Epping sixth in the points standings.

“It’s really important (to be able to run well when it is hot outside),” Todd said. “We are starting the second half of the season and I said earlier in the week it is go time to start making moves. I said last year I wanted to be in the top five (in points) going into Indy and we are hanging around there now and now I would like to be closer to the top three going into the (six-race) Countdown (to the Championship).”

Todd took a moment to describe his stout pass in Q2.

“That was a good run for the DHL Toyota,” Todd said. “We missed it a little bit in Q1 (a 4.122-second pass). It was just a little bit slow and the track wasn’t as good. The track prep came around and the track cooled down in Q2 and we put up a good number. I didn’t think it was going to hold though. I’m kind of surprised that (Ron) Capps didn’t run better than what he did. Hats off to Jon O (Oberhofer) and Todd Smith (Todd’s crew chiefs) for adapting to these hot conditions and making that thing rip like it is.

You want to work on your race-day set-up on Saturday, but that probably is not going to be the case because it’s supposed to be cooler on Sunday. We’re just going to go up there (Saturday) and run as hard as we can in the heat and probably use those notes later this season when the track is hot again.”

With this being the first race of the second half of the season, Todd has a simple approach.

“Wins,” he said. “You don’t want to peak too soon, but I would like to get another win under our belt at least. It seems like second through seventh are pretty tight in the points right now and there’s a lot of jockeying around each week and I just want to be inside that top five coming out of Indy going into the Countdown to the Championship.”

In the previous four NHRA national events, Todd only earned three round wins, something that didn’t sit well with him.

“That four race swing definitely didn’t go the way we wanted it to,” Todd said. “Come to find out, we think we had an issue with the primary car that we were running that’s why we switched and brought out last year’s car there on Sunday in Norwalk (Ohio). It’s like we never put it away. It’s old trusty. We ran it there on Monday and ran well in testing, so Connie (Kalitta) carried that over here to this weekend. Testing is really important because we don’t get many chances to test because of the cost and the time and the work that goes into it. You’ve got different parts and pieces you want to try that you really can’t afford to try during a race weekend so (testing) is really crucial.”

Bringing out the Toyota he won the championship in wasn’t that big of a concern to Todd.

“We started the season with that car the first two races and then we front-halved it and put it away so it was pretty much ready to go in case of emergency and we could qualify into race day,” Todd said. “We drug it out Saturday night (in Norwalk) and we put the thing fully together and it ran really good in Norwalk Sunday and Monday. I had all the faith in the world in that car. I’m more comfortable in that thing than the current car we were running, so I’m happy with it and hopefully we don’t have to change it again the rest of the year. The car we were running, we think the front-half was getting worn out on it and it was time for a change.”

At Norwalk, Todd beat Robert Hight in the first round, before being upended by John Force in the second round.