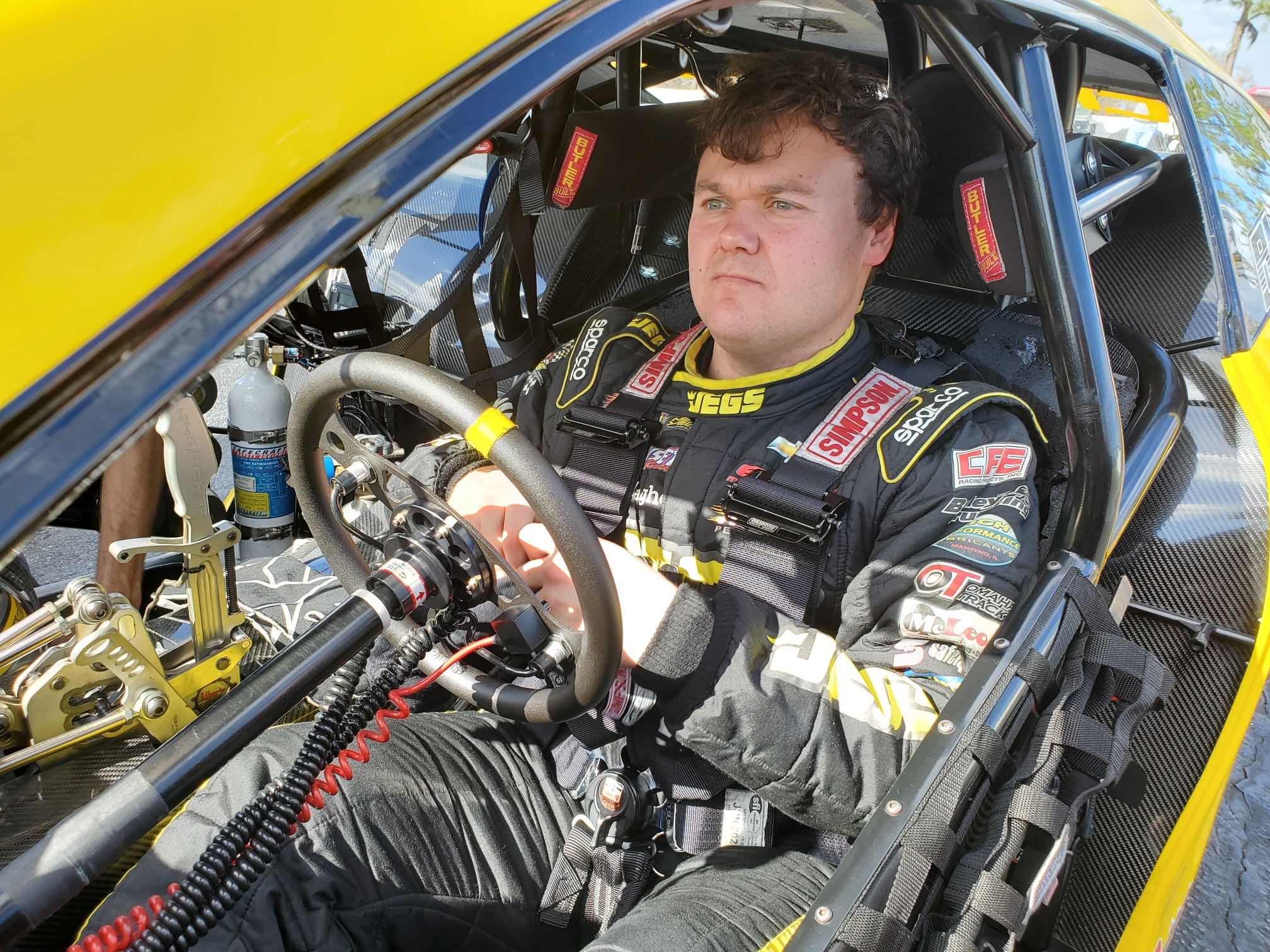 Gauging Troy Coughlin, Jr.'s enthusiasm level for driving a Pro Stocker, one might draw the conclusion the third-generation driver isn't brimming with excitement. After all, the multi-talented drag racer has already licensed in a Top Fuel dragster, driven a competitive Pro Modified, and currently campaigns a much faster Top Alcohol Dragster.

Don't be fooled, the kid is excited. He just learned long ago as a drag racer to sport a Poker Face.

"It's so different from anything I've ever driven before," Coughlin said, after his fourth run behind the wheel of the Jegs.com Pro Stock Camaro. "It's very cognitive, very athletic, and it's very difficult. You're trying to be so precise with shifting on time and hitting the tree and, and keeping it in the groove. So there's just a lot more going on, or there's more cognitive activity going through the brain."

As he sees it, driving a Pro Stock car is as much a cerebral challenge as a physical one.

"So essentially the learning course of this thing is definitely challenging," Coughlin explained. "I give all the credit in the world to the drivers and the crews of these pro stock cars because they're all so passionate, and they're tough. They're having to get every ounce out of this thing and the hoops that these guys and girls now go through, it's absolutely awesome and breathtaking because I love the process of just trying to be better, make good runs and learn and become better drivers. That's one thing I've always appreciated and respected about this class."

The respect factor was the biggest driving factor behind this driving challenge.

"It's something I've been around my whole life, and I've always had a general interest in it," Coughlin said. "My Uncle Jeg said, 'If you want to come to make the laps to try it. I love drag racing. Not going to miss out on an opportunity; going to give it a shot. Just making laps; learning how the class works." 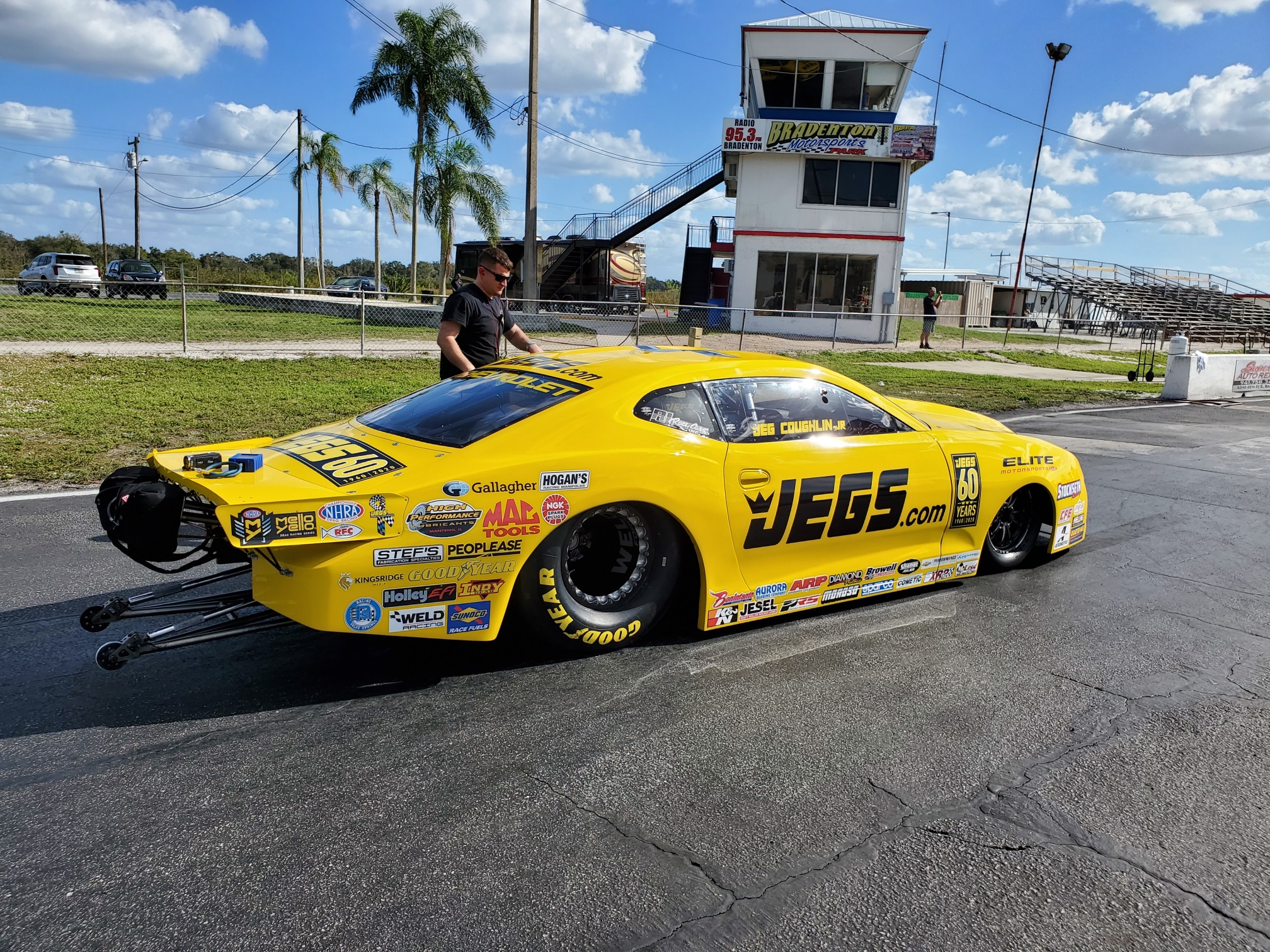 Coughlin is uncertain where the test session will lead, and if ever, he will race Pro Stock this season.

"We'll have to see how it unfolds," Coughlin admitted. "Whenever opportunities arrive, they arrive, and I am committed with Rich and Richie McPhillips for 2020 in the A/Fuel Dragster; that's a for sure thing. Those guys have been nothing but awesome to me, and I'm very lucky to get to drive with them."

Coughlin plans to make more runs before wrapping up on Thursday. Still, the first run remains fresh in his mind.

"The way those cars accelerate, it's just such a different acceleration than anything I'm used to," Coughlin explained. "This just accelerated a lot harder than I really thought it would. So it's just a different feeling. It's a different sport of drag race."

Coughlin says he is going to work towards obtaining a Pro Stock license should the opportunity for competition present itself.

"I'm going to submit time slips and be a new applicant as if I was upgrading," Coughlin said.