THEY ALMOST WITHDREW: TWO TOP FUEL DRIVERS WHO ARE GLAD THEY WENT TO INDY 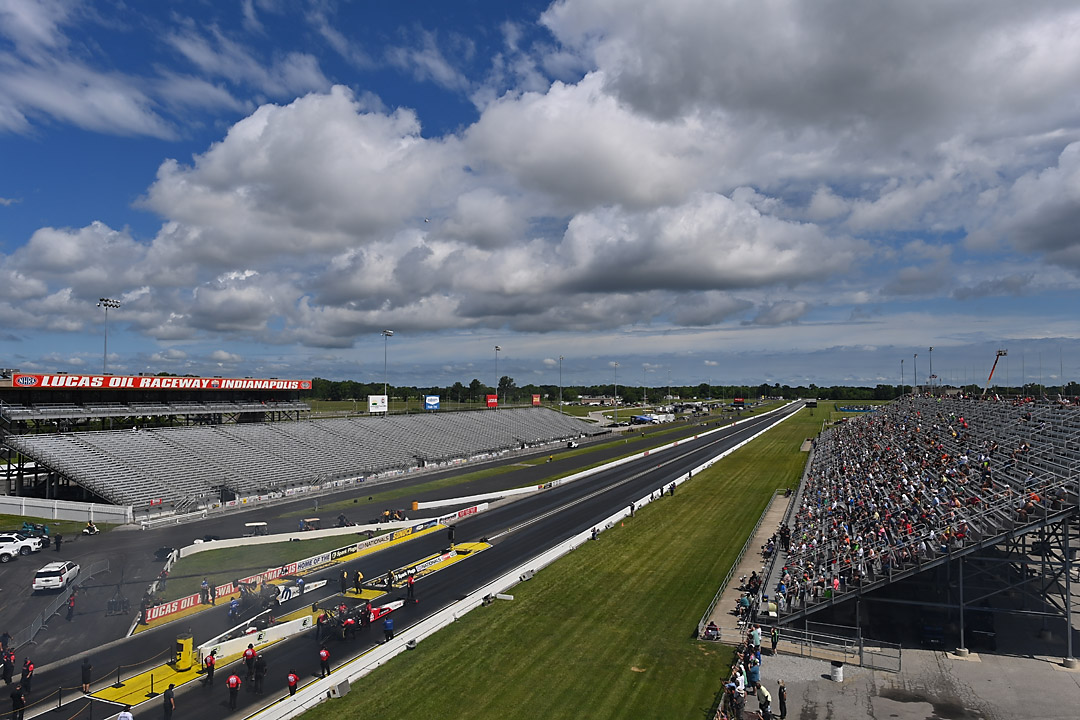 Where Top Fuel drivers Justin Ashley and T.J. Zizzo live, it's challenging to get away from the reality of the coronavirus. 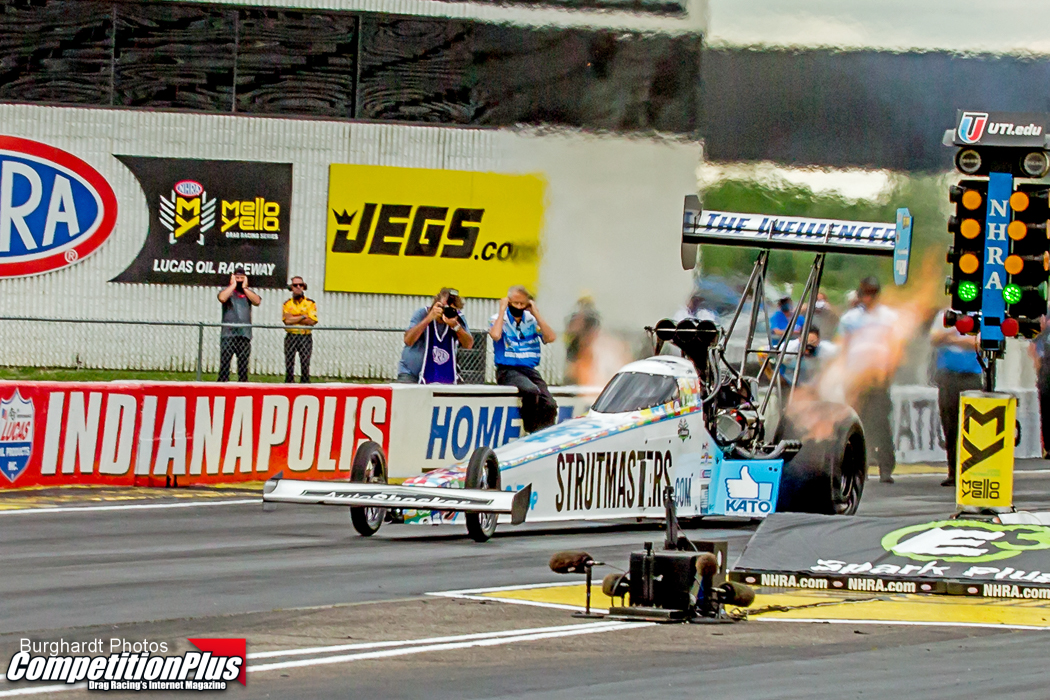 Ashley, who resides on New York's Long Island, has watched as COVID-19 has made his hometown, and neighboring New York City a pandemic hotspot.

Zizzo, who lives in Lincolnshire, Ill., a 15-minute drive to Chicago, has watched as the novel virus has inundated close to home.

Initially, the two drivers were entered to race in the E3 Spark Plugs NHRA Nationals as a means to escape the stress of everything going on around them. One thing the two drivers realized, there's no escaping the pandemic.

In a sport where second-guessing can lose a race, or get a driver hurt, little did they know up until the final day to enter the event both had their finger on the proverbial cancel button to withdraw their entries. Yes, two drivers who cover a 1000-foot race-course at over 320 miles per hour were afraid of what they couldn't see but could easily contract through the negligence of others.

Monday, as they reflected on the NHRA's return to racing, albeit in a limited capacity, they were glad they didn't second-guess their decision.

"I thought NHRA did great," said Ashley, the Strutmasters.com-sponsored driver who is considered a front-runner for the NHRA's Rookie of the Year award. "I thought the race in Indianapolis went very well. We kind of went in there expecting the unexpected. Nobody's ever done this before at an NHRA event, so nobody really knew what we were looking at.

"But as it turns out, NHRA did a fantastic job. We felt more than safe. They were excellent at implementing all the necessary protocols. All the teams and fans alike seemed like they went above and beyond to wear their masks and keep their distance, and it felt like a really safe environment, and it was very, very encouraging for me as someone who's always concerned about the health and safety of our team."

"Before we went to the events, I envisioned a disaster," Zizzo added. "We almost pulled the plug the day before because I envisioned, okay, we're in our pit area. It will allow us a little extra space, but I envisioned pulling the car out into a sea of spectators. And at that point, I wasn't going to be comfortable, and nor should anybody on our team be comfortable.

"I also envisioned spectators not following the rules because I don't follow the rules. I own my own small business. I could do whatever the heck I want in my small business. So personally I don't wear masks in our shop. We socially distance in our shop. We have a very big shop with a lot of space and limited employees. I don't have 100 employees, I only have eight, so we could easily do that here. I was worried personally about wearing a mask for four days in a row.

"I woke up this [Monday], and I felt "naked not wearing a mask. So I feel NHRA did a good job limiting the fans and making sure a majority of the fans followed the rules. Sure, I saw fans without masks, but you're going to have that at the local grocery store, right?" 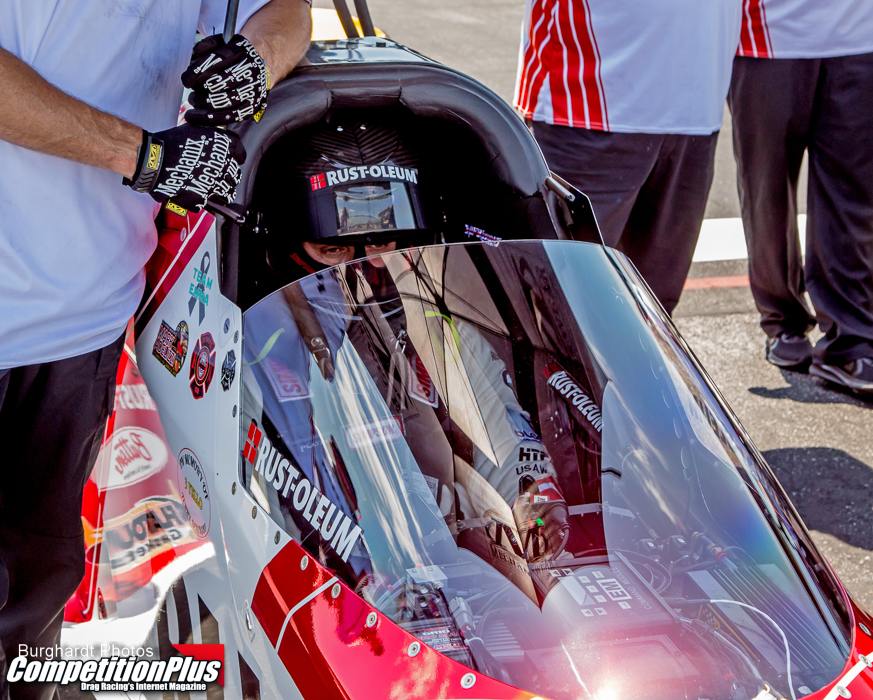 Zizzo ended up qualifying No. 5 at the E3 Spark Plugs NHRA Nationals and reached the quarter-finals where he lost to eventual champion Billy Torrence. The Rust-Oleum-sponsored driver left the event with top speed courtesy of a 326.40 blast in qualifying.

Ashley qualified No. 9 and ended up dropping a tough battle opposite of Shawn Langdon in the first round.

So what changed their minds? For Ashley, he believed the sanctioning body deserved the opportunity to prove itself.

"We decided, "You know what? Let's see how it goes this weekend, and if at any point we're uncomfortable, we will either leave the event or we just won't go next weekend," Ashley said. "But fortunately, NHRA did an awesome job, and we felt more than comfortable, and the fans and the teams all did an excellent job of following all the necessary protocols. So we definitely feel good about the decision that we made, and we're looking forward to going back and racing again this weekend."

At first, Zizzo, though seeking a safer place to race, wasn't too fond of all the extra precautions.

"Even getting our team in, all the expectations that they wanted and, 'Oh, we're taking your temperature. We need you to fill out this form and this form. We need you to sign in this release. You need to do all this stuff," Zizzo recalled. "I was like, 'This is crazy."

"Ultimately, they did a great job the whole weekend long," he said.

The competitor in him is what nudged Zizzo into racing the Indy double-header. After all, as he believes, there's no room in the DNA of a fuel racer for fear.

"Being a racer, being a competitor. That's ultimately what brought me to that event," Zizzo said. "Nothing ahead of time encouraged me to go to that event. There was not enough information brought to the table about spectators before that event to us competitors. We talked about masks. We saw the 56 pages of protocols. Our team read through it and we took the proper precautions. But the fan situation was pretty, pretty limited about how many fans we're going to have.

"NHRA limited the number of fans that went in there. And that was all I needed for that particular moment, although I know they lost their ass [financially]. But sometimes you got to crawl before you walk and walk before you run, right?"

Ashley believes if the NHRA's first foray into the post-pandemic racing era is indicative of the future, he sees NHRA as the benchmark of how to race with spectators.

"I'm always optimistic," Ashley said. "I love NHRA and I love racing, so I would love nothing more than to be able to complete a relatively normal season. However, I understand given the different circumstances based upon which state you're in, things may change. So we're going to have an open mind, and at this point it's just going to be more of a wait-and-see approach."

"That event for NHRA hopefully proved to the public, and to the government officials, that our drag racing fans are the best fans in the world and they will do anything to protect our sport," Zizzo added. "And if that happens, we could go on to the next step. Maybe we could do it in different parts of this country."

The NHRA insisted on showing off its Mello Yello Drag Racing Series to live audiences if and when it relaunched. They achieved pretty much what they hoped for in this new age of coronavirus economics. #DragRacingNews - https://t.co/dKTyyfHchM pic.twitter.com/B95XR47AFR