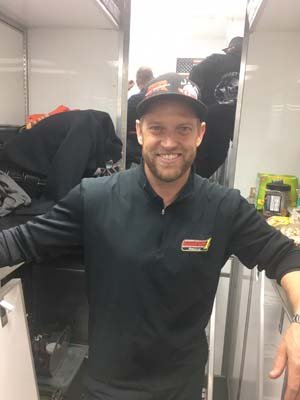 Besides Jackson, Jim Whiteley will also be competing in the Alcohol class at the event.

“It is no secret my dream is to crush Alcohol and Nitro Racing,” Jackson said. “This is a great opportunity for me to make some passes and fuel that passion. I cannot thank Jim and Annie enough for this opportunity. Sheikh Abdulla was also very supportive and always has my back. These are incredible people and a huge asset to drag racing.”

Jackson has been licensed in Top Alcohol since 2008, according to the press release. He got his license after attending the Frank Hawley’s Drag Racing School.

“Stevie Fast” has been serving as crew chief for Jim Whiteley’s NHRA Pro Mod since May 2019. The two competed against each other, while Jackson won his first NHRA Pro Mod Championship last year.

The two drivers shared data that helped both teams.

This weekend, both Jackson and Whiteley will be competing in the NHRA’s Dodge NHRA Indy Nationals presented by Pennzoil at Lucas Oil Raceway at Indianapolis in Brownsburg, Indiana.

“It is going to be quite interested racing a totally different screw-blown Pro Mod in the eighth-mile,” Whiteley said. “I got to run my Top Sportsman Truck eighth mile at the MWDRS event last month and loved it. We are going to get after it with Shadow and see what we can make happen.”

Whiteley will be competing in Shadow 2.0. Previously, Shadow competed in the NHRA in May 2018 following a crash by Jackson at the Four-Wide Nationals at zMAX Dragway in Concord, North Carolina. “Last time, we put Shadow on big tires, we were backed against a deadline to make an NHRA race,” Jackson said. “This time is more for fun, to come to the Mid-West and crush those boys,” Jackson said. “Jim is one hell of a driver and hasn’t raced in Pro Mod much this year and it is time for him to get back to it.”