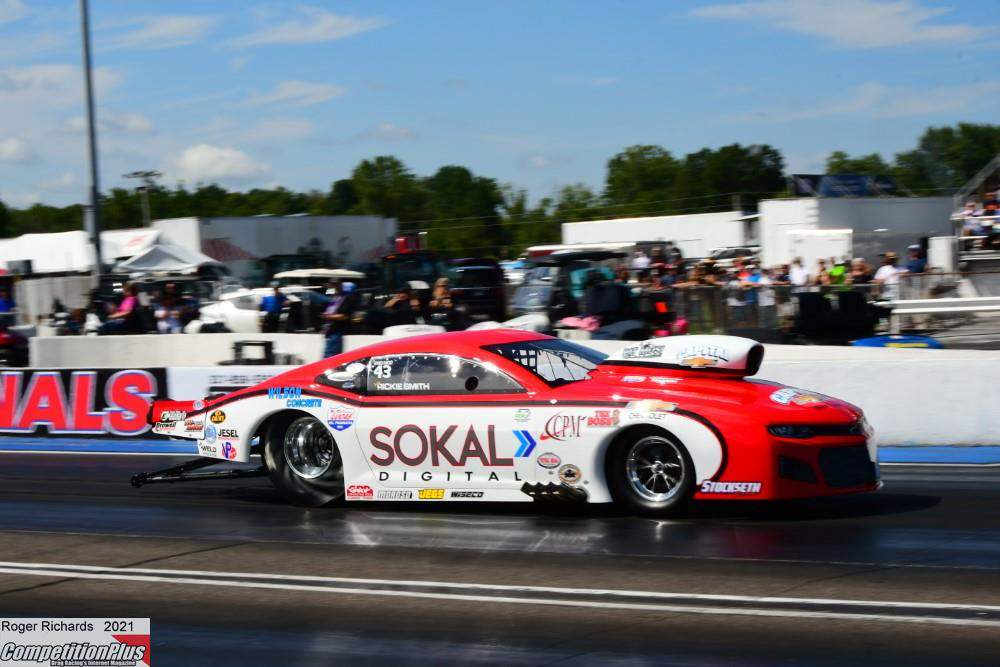 He's like the grumpy uncle who went on vacation from the family get-togethers.

Smith qualified No. 1 in Friday's lone session and hung around until the semi-finals when his nitrous-injected Camaro drifted out of the groove, where he wisely lifted. He was very much capable of winning, as fellow nitrous racer Jeffrey Barker went on to nail down the crown for the bottle rockets.

"I'm glad to get back," Smith said. "I've raced all my life. I'm ready to go racing. It's just, those other races are a little far off, and rules are pretty far off, and just no use going. So, we decided to step back up and see if we can get back in the groove here."

Given a choice, Smith would rather deal with teeth-rattling tire shake than the politics known to permeate Pro Modified.

"Gosh, heck, I can fix a tire shake. I don't have the money to fix politics," Smith said with a grin.

Don't think for a moment during his time off; Smith was sitting around fishing and listening to country music. He was working the eighth-mile of other Pro Modified oriented series. It didn't take long for the cagey veteran from King, North Carolina, to realize, outlaw races demand an outlaw car, and with his machine legal in the NHRA nitrous rules, there's no wiggle room against the purpose-built machines.

Smith had flirted with the idea of running a Procharged combination but turned to chassis builder Jerry Bickel instead to prepare a standard supercharged combination for him. However, when Justin Bond crashed in Brainerd, Khalid alBalooshi stepped out of the Procharged car he was driving and purchased Bickel's new blower car destined for Smith.

Bickel went to work the next day on another supercharged car for Smith. It's not a matter of if he can't beat them, to join them. He's just tired of fighting the fight for a combination he believes is always fighting at a disadvantage.

"I still got all my engines I bought from Todd and everything," Smith explained. "I'm building a supercharged car, and I'm just getting ready for next year. If they don't get these rules right over here, I won't run much over here next year. I'll just run outlaw stuff and some of the big-money races and things like that.

"I'm way overweight to run outlaw type [nitrous], or anything else for my nitrous car. I'd be competitive here with any nitrous car, because we can put weight in, but if I want to go run somewhere else, I got to do a blower car, and that's what I'm going to do."

Those who have watched the Rickie Smith vs. Anything but Nitrous saga might wonder which has a higher number, the number of threats to change combinations, or times he's said he's going to retire.

Smith is quick to point out; all the retirement talk was the topic of others' conversations, not his.

"Here's the problem," Smith said. "I've never said I was going to retire but one time, and that was in St. Louis, pretty much in the tower, I think, about when I had the championship getting sewed up. That's the only time I've ever said that I'm retiring. The media has said I'm going to retire for the last four or five years, but I didn't say it."

The more a racer achieves success, Smith understands that the more they can become a lightning rod for restrictions applied by the race series' tech department. Even in the days when he raced a Maverick in NHRA Modified Production (within Modified Eliminator), and IHRA Super Mod, where his domination led to the death of a class, life was much simpler.

"It wasn't nothing like it is now," Smith admitted. "You know what I mean? It's a lot of money out here. A lot of people got a lot of money, and the race this class, and it's getting tough, you know? And it ain't that I can't race with them. I can win when I'm competitive. I proved that other places I go race. If I can run with you, I can win with you. But when you're outrunning me .03 to .05, it's hard to win in this day and age. A lot of good drivers out here.

"So, I'm just watching. Hopefully, NHRA gets this rule package right this winter, and we can all go race next year, and have some good times, and get a lot of cars back in the class. So it ain't just me. I'm glad right now; I'm not the crying baby. The blower guys are the crying babies. They're finally getting treated the way I've been treated for the last four years.

"They don't like getting outrun .03 and .04. So, they're the ones doing the crying. And it's pretty funny when it all gets down to it, but we'll see where it goes. And hopefully, they do what's right and get this class back under order. If it don't, it ain't going to be just me. There's a lot of other places. There's a lot of places you can go run a Pro Modified car. A lot of places, for big money. So, it's up to NHRA whether they want this class to survive or not.

And regardless of which combination is under the hood of his next race car, Smith believes the ball is in the court of NHRA's tech department to make sure everyone has a fair chance.

"When you run a parity class, you're supposed to have parity," Smith explained. "And if they hadn't done it to me three out of four years, I couldn't bitch, maybe, as much as I bitch. Okay? If you call it bitching. But when they kill me three times in four years, within 24 hours. They didn't wait a year; they didn't wait six months within 24 hours. It's proof. I'm not just saying it. It's all out there on paper, NHRA, it's all, what I'm telling you is the truth.

"When they did that to me like that, why can't you do these other guys like that? Why do you have a problem with a guy that supported drag racing for 47 years, won a lot of championships, never had a bad face in drag racing, why are you treating me this way, is what I don't understand."