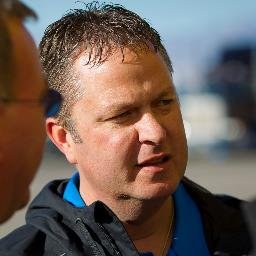 Scott Woodruff's mantra is to hang in the shadows, making stuff happen with little or no recognition. He prefers to be a mover and shaker in the drag racing community, painting the world in a positive light as his role as Director of Motorsports for Jegs Mail Order.

Sunday afternoon, Woodruff stepped out of his comfort zone. He is critical of the NHRA's decision to postpone the Midwest Nationals' balance outside of St. Louis, starting with the third pair in the quarterfinals in Pro Stock.

The problem Woodruff says he faces is there isn't a process for competitors to appeal competition rulings. For a racer to appeal a fine or suspension, there is one, but this isn't the issue at hand.

Race officials decided to postpone the balance of Pro Stock eliminations until the NHRA FallNationals at the Texas Motorplex outside of Dallas, Texas. The decision came following Jeg Coughlin's second-round race against Greg Anderson. Coughlin got out of shape and lifted in the match. Woodruff believes that had his driver not opted to lift, he too could have ended up with the same fate as Kenny Delco, the driver who crashed ironically while racing Anderson.

"It was getting ready to happen, no doubt," Woodruff said. "Given the fact that the NHRA decided to stop competition after two pairs went down in round two of Pro Stock, obviously they felt like the track wasn't safe or they would have continued to run us, which they stopped."

Anderson, in a statement issued after the postponement of the event, said, "When you step back and look at it, I guess it was the right decision [to stop racing]. I'm very happy we survived and have a chance, still, to win this event, but I'm sad that we couldn't finish. It's not a lot of fun trying to drive down the racetrack like that, but then again, it's a huge challenge – and I like huge challenges. I was up for it if we were going to keep going. We would have kept trying, kept working to make our cars better to get down that track."

The stage was set for a challenging day when, because of rain and factors beyond NHRA's control, there were no Pro Stock cars that ran on Saturday and they seeded the field on points. Essentially, Pro Stock was sent out to race Sunday on a track where none of its competitors had made a run during the weekend.

Woodruff believes Kyle Koretsky's words and actions speak volumes on the issue. He wants to be clear; he's not critical of series officials opting to race another day. He believes the conditions were so bad in the first round, with an abbreviated season, allowing races to stand in which drivers had to decide between racing for a championship and lifting to survive is hardly the platform of fairness and safety the Glendora, Ca.-based NHRA was founded on. 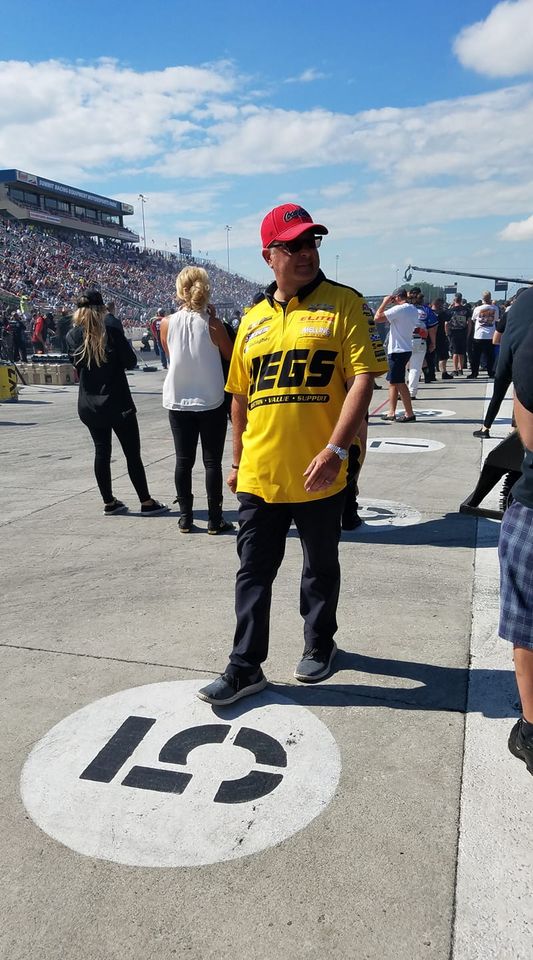 In two of the first three races, drivers began to drift in the not-as-much-prep zone, the area where traction compound is decreased at the 1000-foot mark, leaving the low downforce race cars sometimes moving around in the last part of the track.

Case in point. Bo Butner was ahead for much of his race against Aaron Stanfield but was forced to lift early and pull the parachutes. Two pairs later, Kenny Delco wasn't as fortunate, losing control of his car, which drifted toward the centerline and crash. Delco was at a loss for what happened.

"I have no idea - it was going perfectly straight, and then it just went sideways," Delco said.

On at least two occasions, following the Delco incident, drivers pulled the parachutes early in the runs.

Racing on a track he'd never been down in a Pro Stock car, in conditions which challenged even the most seasoned driver was an experience which left rookie driver Koretsky even more cautious than he already was.

"We were in the left lane originally, and then we got switched over to the right after Kenny crashed there," Koretsky said. "I had multiple people come up to me, 'If it doesn't feel safe, shut it down, not worth it."

"And then to have Jason Line come in my window before I do a burnout and said, 'I've been in this movie before. If it doesn't feel safe, just shut it off. You can race another day."

So, kind of going down the track. I knew I hit the tree. Car felt good down low. Just as soon as I plugged in the fifth gear, we started drifting towards the centerline a little bit and kind of had to bring it back a good amount, and I just decided that I'll race another day and pushed in the clutch."

Woodruff believes had the NHRA not stepped in when they did in the second round, there could have easily been another incident similar to Delco's.

"Alex Laughlin was the first pair in the right lane [of second round]; he got out of shape and hit his parachutes early," Woodruff said. "Then Jeg did the same thing, but only his move was more erratic because they sprayed in between the two pairs, which in turn actually, the spray made it worse on the surface." 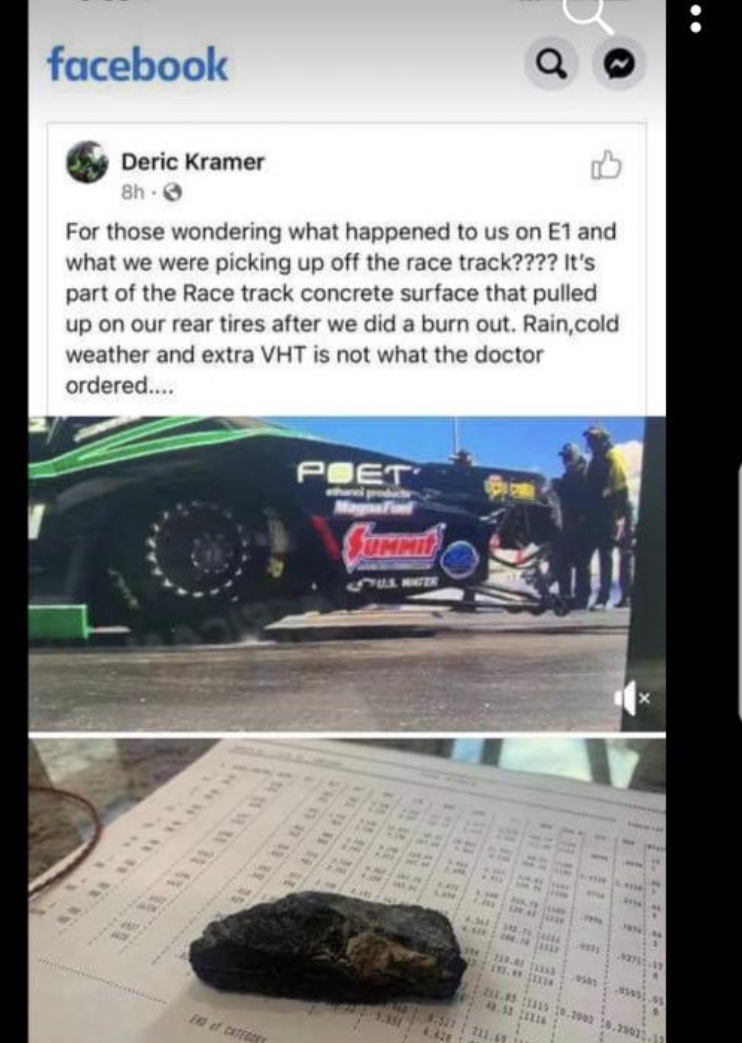 As Woodruff sees it, the track didn't all of a sudden become unsafe. He believes it was unsafe for the Pro Stock cars from the start.

"Deric Kramer had a big piece of the track that came up on his tire that he came back to the pit area with after the first round," Woodruff explained. "It was part of the track. I mean, a big chunk. We're talking four or five inches in diameter."

Kramer even posted a picture to his social media page, stating, "For those wondering what happened to us on E1 and what we were picking up off the race track ???? It's part of the Race track concrete surface that pulled up on our rear tires after we did the burnout."

Kramer lost in the first round after his car experienced severe tire shake at the hit.

Kramer's team provided the following statement to CompetitionPlus.com, "The seam came apart at 100 feet, and when we saw it on Deric's tires, we thought it was bits of paper."

Kramer's team said they notified track officials of the incident.

Woodruff said he used these points to the NHRA to void out the first and second round when appealing to the NHRA Officials' sense of fairness.

"I find it very ironic that there's no appeal process by NHRA for a situation like this," Woodruff said.

However, Woodruff said NHRA officials verbally cited the 2014 NHRA Carolina Nationals' precedent to stand when faced with similar conditions during a phone conversation the following Wednesday with NHRA's Josh Peterson and Ned Walliser. At that event, there were instances of the racing surface coming up in similar conditions.NHRA's Graham Light considered voiding out the previous races in the first round of the zMax Dragway. In the end, however, Light opted to let those races stand as is.

Woodruff believes, regardless of the precedent, a hardly fair race for the participants essentially renders an adverse effect into a championship battle, which could be decided in two races if the NHRA event in Las Vegas cancels as largely rumored.

"You look at the facts of all this, The on-track facts are what they are," Woodruff contends. "That track wasn't safe when we ran. So, if it wasn't safe, why would we not rerun? In fact, we should probably rerun starting at round one. Granted, that's egg in the face for NHRA for not doing the quality job that they normally do, plain and simple.