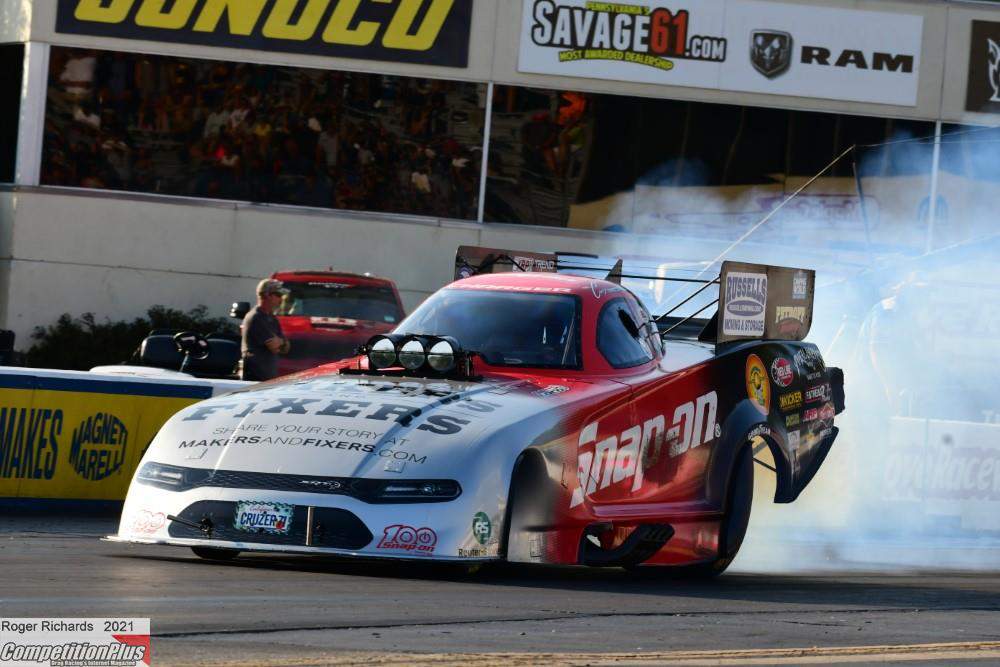 It’s been said drag racing is a right time, right place sport. For two-time Funny Car champion Cruz Pedregon, getting on the good side of the ladder was the key headed into the Mopar Express Lane NHRA Nationals, the first race of the seven-event NHRA playoff series.

Getting on the right side of the ladder required a significant accomplishment, going to No. 1 in stellar conditions, and beating out the likes of equally determined Funny Car teams. It also required Pedregon to pull off a feat that has eluded him for six years. Pedregon had to nail down the No. 1 qualifying position.

Pedregon set himself in the catbird seat on the strength of a 3.875-second run at 326.00 miles per hour during Saturday’s final session at Maple Grove Raceway. The biggest perk of qualifying No. 1 is Pedregon will get a first-round bye run.

“It couldn’t have worked out better. The car was responding. Really, it’s been responding the last maybe six races. We just didn’t notice it as much. But man, I tell you, I don’t know that I’ve driven a car as consistent as this Snap-On Dodge Hellcat. It’s not easy to drive. The thing wants to hunt around there. But it’s going places, that’s for sure.”

Pedregon, who won the inaugural Countdown to the Championship playoff series, got a boost in points headed into the crucial opening event of the seven-event shootout.

“It’s a nice feather in their cap that after three runs, everybody had the same track conditions, for us to come out on top really says a lot about the team and JC,” Pedregon said. “That we have the parts and equipment and the car and all the things as a single-car team to go out and go head-to-head with some of these guys. So, from that perspective, it’s great.”

Having consistency at the right time bodes well for Pedregon, who over the off-season kept the former Make A Wish Don Schumacher Racing crew intact after the program ended.

“The fact that we can come out and really run pretty close to what we ran in Brainerd in different conditions really says a lot,” Pedregon said. “It goes back to JC and not just JC but all the guys that work on the car. Ripp Reynolds is a great assistant and Ryan the car chief. Just really the guys that assemble the car. You’ve got to meticulously put the car together. It’s like a puzzle. All the pieces have to be right or it will not go fast. Believe me; I’ve been through that before.”

Qualifying No. 1 is nice and all, but for Pedregon and the team, winning rounds on Sunday and getting a blue Camping World Drag Racing Series winning hat is the true goal.

“It’s nice, but after we wake up tomorrow we put our yellow hats away,” Pedregon said. “It’s about performing round by round, and we’re back to square one again. Does it help that we have a consistent car? Absolutely. That’s what wins the rounds is a consistent car and a consistently fast car. But, there’ll be guys coming after us, but we’ll just have to answer the bell and just keep coming out swinging.

“I definitely know that I’m up for the challenge. I know the team is; they’re all excited. We’ll see. I mean the great part about all these races is you just don’t know what’s going to happen. There’s some great cars out there, but at least for this day and this weekend so far, so good for the Snap-On Team.”