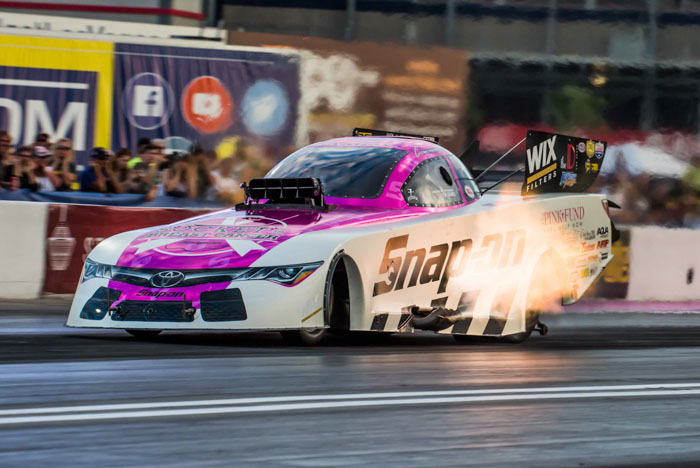 Sometimes race car drivers are referred to as “pilots.”

Cruz Pedregon literally flew to a first-round victory in the first round of the NHRA Toyota Nationals at The Strip at Las Vegas Motor Speedway for undoubtedly the most bizarre pass in his extensive Funny Car career.

About 330 feet into the run against Robert Hight, Pedregon started to feel the Snap-on Toyota Camry lift the front wheels. The car continued to rise and became completely airborne. The rear tires touched down at about 600 feet, sailing all the way to the finish line with the front wheels up. The wheelie bar kept it from flipping over backwards.

Pedregon landed the car on its back tires just before the finish line at 218.55 mph, with the body defying physics and somehow remaining on the chassis.  His unorthodox 4.224-second elapsed time topped Hight’s tire-smoking 6.649-second, 105.01-mph effort.

"I think I wheelstood longer than the Wright Brothers flew through the air,” he said.

But in less than five seconds, he said, he had an epiphany, his life flashed before his eyes, he wondered which way he’d be facing when his self-described “kite” of a race car smashed back to Earth, and he was mindful of his own daughter, Ryaah, and even Hight’s daughter, Autumn. 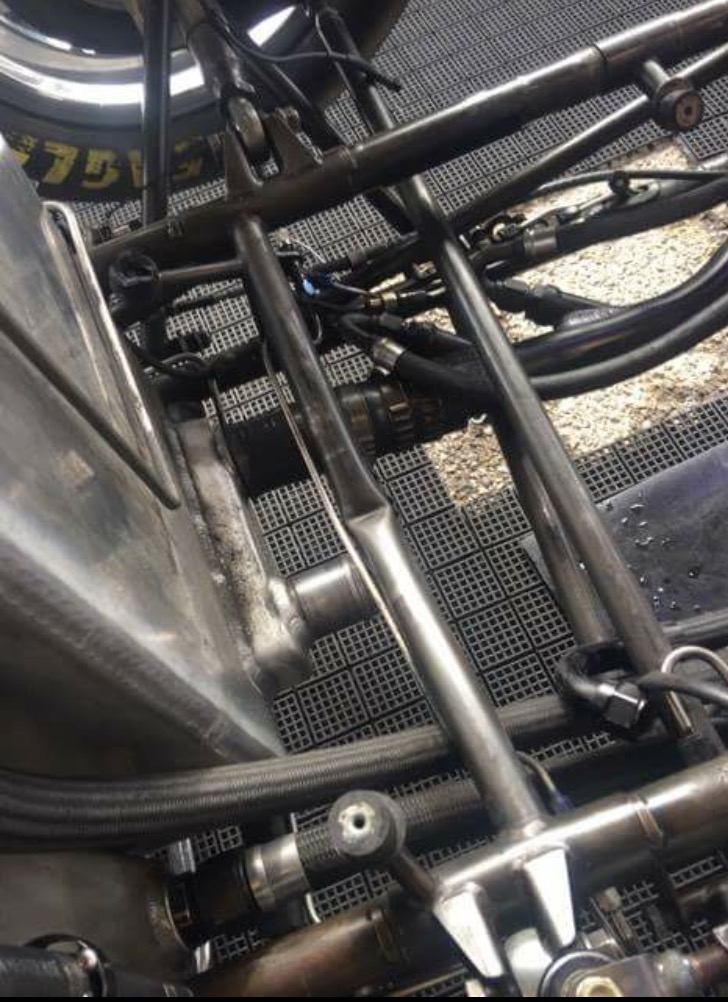 “All of a sudden I saw blue sky, and the other thing is I saw the body separated from the injector. And I thought to myself, 'That's real odd," Pedregon said. "Then it got real quiet. I was thinking two thoughts. I thought for a moment [that] maybe this was it, what it was like to go the other side, because it got real quiet. It was blue, it was pretty, and it was silent. It was peaceful.

“I thought to myself, 'I might be doing a wheelstand now.’ I was hoping when I landed I wasn't going in the wrong direction. I figured there was a good chance I wasn't going to be pointed straight, so I began to brace myself. I was thinking I might get KO'd or feel something from this. That part was scary,” he said.

"I thought about my daughter, and I know Robert has a daughter. My objective was to stay in my lane and stay out of his,” Pedregon said. “It's crazy how I had time to think about that. It's funny how your mind can work. Thankfully, when I landed, I was going straight. I turned on the win light, and all I could do is shake my head because I had just got a three-for-one deal: I survived, got the win-light and didn't get hurt.”

Curiously, he said he saw the win light on his side of the track: "After it landed and I could see the Earth again, I said, 'Well, shoot, I think that light is shining on my side.”

He said, "I was a tiny bit excited, to be honest.”
Then he went into analytical mode.

“Even though I knew the car was wrecked, and I wasn't safely stopped yet, it just goes to show how wound up we are as drivers. We didn't have the greatest season this year. And Robert has been using me up like a dirty shirt this season. I was just trying to win the round. You go from a few seconds of trying to win the round, to living and surviving, and its importance, to budget when I realize this could cost me another chassis. That much can run through your head in three seconds.

"I had time to think, man. I didn't want to get hurt. I have a daughter, and I want to enjoy my life as well as I can after racing. We haven't had a good year, so I was totally in trying to win mode. Of all the things that could have happened, smoking the tires, getting a red-light, being late, smoke the tires, or drop a cylinder – that was the last thing I thought would happen.

"I knew something was going on, but I had just hoped to land straight. That was my biggest concern,” Pedregon said. The funny thing about human beings is that if you have time to think about getting hurt it’s the worst thing. I had to think about it for 600 to 700 feet and what might happen. That was way too long to think about all of those things. It might have been a few seconds, but I was thinking, 'Please land right.’ And it did."

Pedregon understandably appeared jostled and was favoring his back after climbing from the car.

"I had a little pain in my back, but then I started thinking like a team owner: Now what? I knew we couldn't pull out our spare car, so at that point I knew it wasn't good for us. I didn't think much of my safety after I landed straight. I started thinking of the what ifs, and if I had gone right or left. I'm just happy to be able to talk about it afterward."

When he climbed from the car, Pedregon said, “I’ve got my tuner hat on. I’m trying to figure out what happened,” he said. “I’m a little sore.” 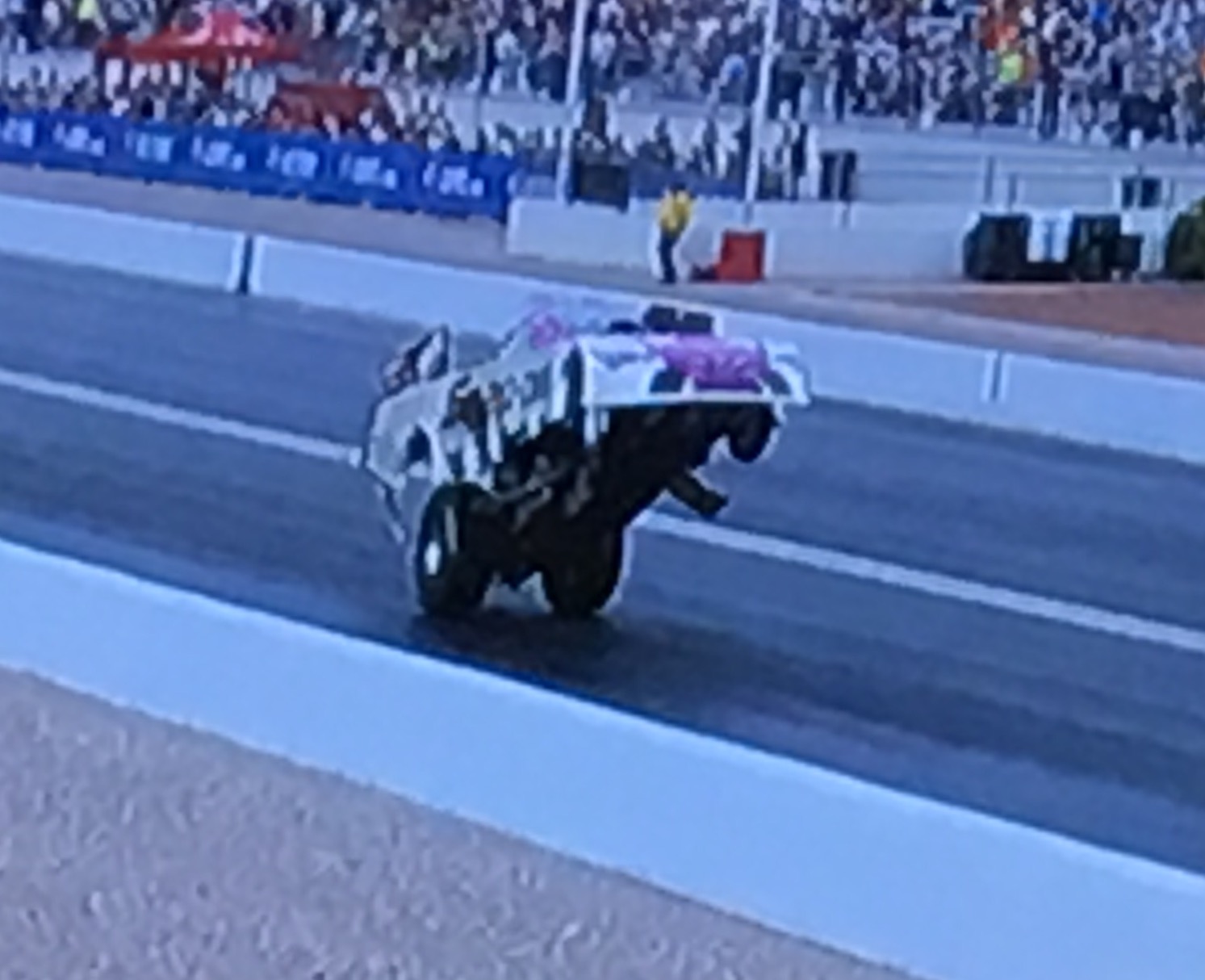 In the heat of the moment, he was especially sore at the NHRA, citing the trendy laid-back exhaust headers as the source of Sunday’s harrowing ride.

“We’re all flirting with danger,” said Pedregon, who months ago said he experimented with the concept long before Don Schumacher Racing crew chief Jimmy Prock expounded on that last summer and ushered in the domino-like wave of 3.9- and 3.8-second performance milestones.

He said he had spoken with NHRA officials about the chic tweak, indicating he was warning that the practice is reaching the perilous level. Evidently he thought he had gotten no satisfaction.

However, Pedregon backed off and calmed down and decided to approach the situation calmly, when he was thinking more clearly.

"I'm going to discuss that with the management of the NHRA. I'm not going to get into that,” he said. “Honestly, there are cars with laid-back headers which go down the track. I cannot argue with that point. Obviously, we have missed part of the adjustment. I'm not going to get into those details. I do know we are pressing hard, and we are fighting for our lives. I'm the owner and driver, so I was trying to win a race against Robert Hight. We'll go back and figure things out, and I will do the politicking. It happened, and at least we minimized the damage. I think there's better ways to communicate this. I'm human, and I had just watched my life flash before me."

"We have three sets of headers: the stand-up headers, intermediate headers, and the laid-back headers. We had the intermediate headers on because we have wheel stood before, did it in Brainerd. I felt like it wasn't a problem,” Pedregon said. “It happened, so we are going to go back and find some things and try to alleviate some of the problems.

"As much as I love these cars, and I love racing them, these cars can go fast and anything can happen,” he said. “As a driver, I watch videos of other guys wheelstanding, and I think of my cocky, confident self that I could have lifted earlier. As much as I think of how I drive, there was no saving that. I was off the throttle fairly quick, but when that wind takes over it can take the car to a point of no return. And it did then."

Pedregon said, “I'd have to say this run was at the top of the list of runs . . . judging from the fans’ response. I purposely went in front of the crowd, because I have a lot of fans out here and I've been doing this going on 30 years. I wanted them to know I was OK and these cars are built right. NHRA does have a good safety credit with these cars, and they deserve a lot of credit.

"It was humbling and heartfelt that the fans felt compelled to come to the pits and want an autograph and check to make sure I was OK. It puts things in perspective,” he said. “This was the last thing we wanted to do. We wanted to keep going rounds. These cars are extreme, and there's some extreme for you."

Minutes after the incident, the Snap-on team indicated that the damage could be repaired and that Pedregon likely would come back for his quarterfinal match against points leader Ron Capps. Ultimately, he gave Capps a free pass into the semifinals, for the wounded Toyota could not be repaired in the allotted time and rules don’t permit the use of back-up cars on race day.

"We weren't able to run because NHRA rules mandate you cannot bring in a new car that hasn't been teched. I thought for a moment we could have brought in our spare car which was ready to go, but rightfully so – it was an untested car,” Pedregon said. “We go really fast out here, and we did get the round win."

With his Camry carrying a broken wheelie bar up the return road on its way back to the pits, exhibition wheelstander Ed “The Outlaw” Jones of Jelly Belly-branded stagecoach notoriety offered an “I’m not worthy”-style bow to Pedregon.

Said the survivor, “It was a pretty expensive wheelstander. It was a nitro-powered wheelstander sponsored by Snap-on and Toyota. Imagine that."

Hight said he didn’t pay too much attention to Pedregon’s flight in the other lane.

“I was focused on pedaling my Camaro while Cruz was doing that wheelstand. The only thing I was thinking about was I hoped he crossed the center line,” Hight said. “I am really glad he is safe, and that is a tribute to all our safety equipment. That was a tough round for us, and we are going to focus on going to Pomona to win the last race of the season.”

Pedregon, too, is ready to get back on the racetrack.

“We are going to test, and we have a spare car in the trailer. It has a new front half on it. We are getting right back on the horse and going to ride."