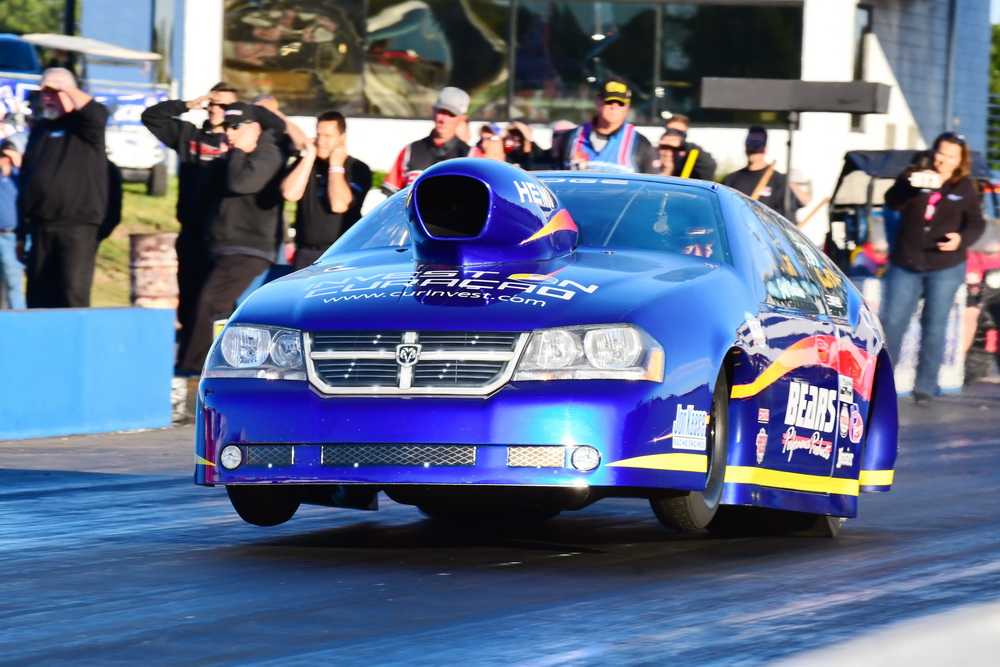 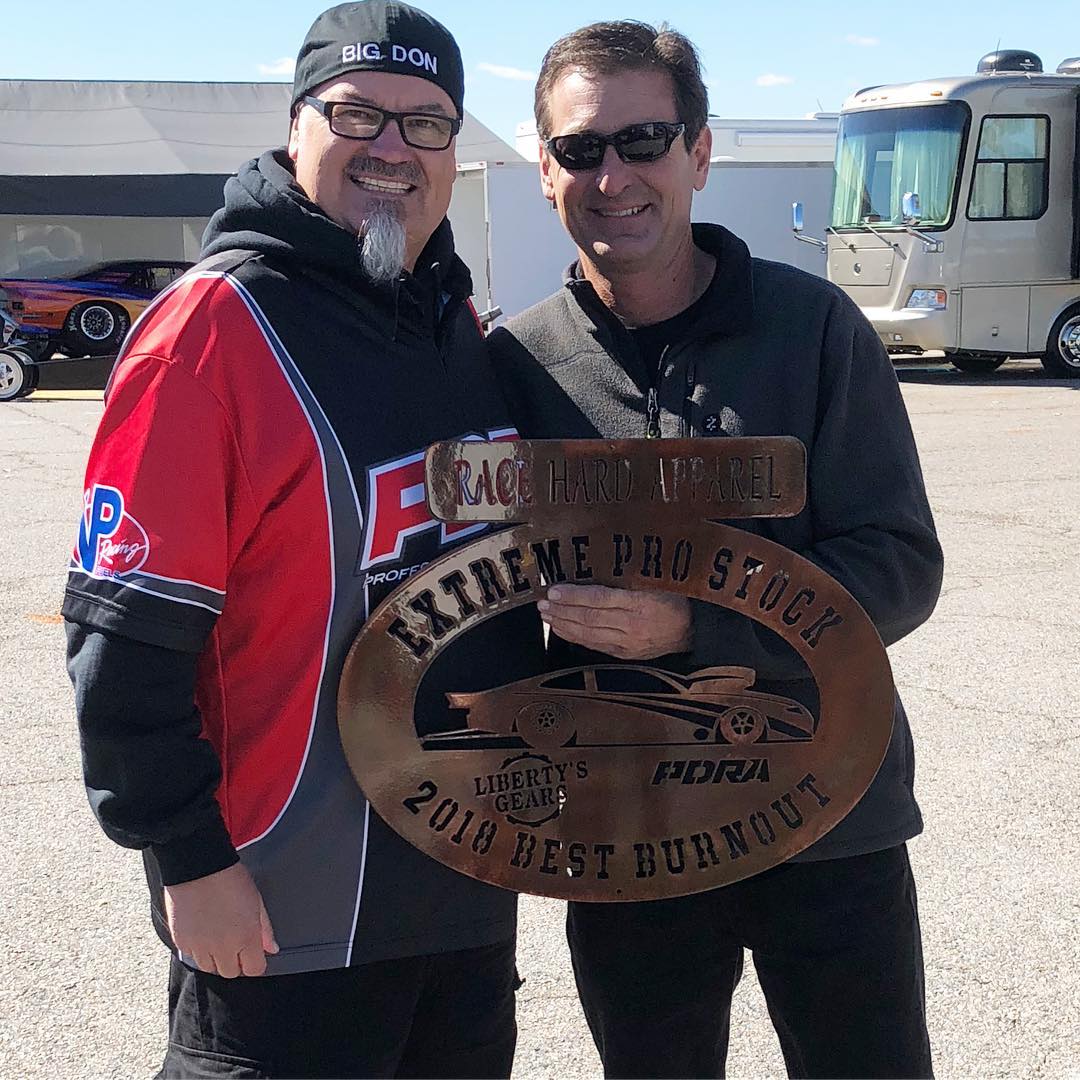 You’ll have to excuse Jeff Dobbins if his goals seem greedy. Hey, at least his list is short.

1. He wants to win a Pro Stock world championship.

1A. He wants to be the first Extreme/Mountain Motor Pro Stock driver officially in the 3-second zone. Unofficially, he’s had a taste of that with a 3.988 blast in testing at Virginia Motorsports Park last October, the day before the PDRA season finale. The next day, he came close to eclipsing that barrier with a 4.010 shot.

“That’s the last big milestone in Pro Stock, the threes,” Dobbins said, “and I want to put my name on it.”

It’s a virtual certainty that Dobbins, 52, will have to wait until at least October to possibly check both of those items off his list. Simply, the weather is already too hot and humid to have a crack at the 3s until the fall, and most of the PDRA schedule, with dozens of rounds of eliminations, is still ahead of the Wilmington, N.C., veteran.

“All we need is an evening that’s 65 degrees, and that’s very possible in September,” said Dobbins, whose immediate task is to square off against Tommy Lee when the rain-delayed VMP final from early May is settled the first weekend in June at Maryland International Raceway.

“The problem in Virginia last year was that during the race the weather got too good,” he said. “You can overpower any track, no matter how perfect the conditions are. And Pro Stock’s the hardest class in drag racing. It’s all manual controls; we can’t use traction control like they can in other classes, we have to shift the cars manually — everything has got to be perfect to do it.”

To be a Pro Stock racer was a childhood dream of Dobbins’, who grew up idolizing the likes of Lee Shepherd and Warren Johnson. He took those dreams to the strip as a high school student in the late ‘80s — a student who celebrated his graduation by building a bracket car for competition at Coastal Plains Dragway in Jacksonville, N.C., about an hour from home.

He then traveled the Carolinas for close to a decade in search of big-money bracket payouts before he purchased a Top Sportsman entry “and decided to give that a shot.” It proved to be an easy transition to the much quicker times and higher speeds with “three or four” wins, and he followed that by capturing the IHRA Top Sportsman crown in 1998. 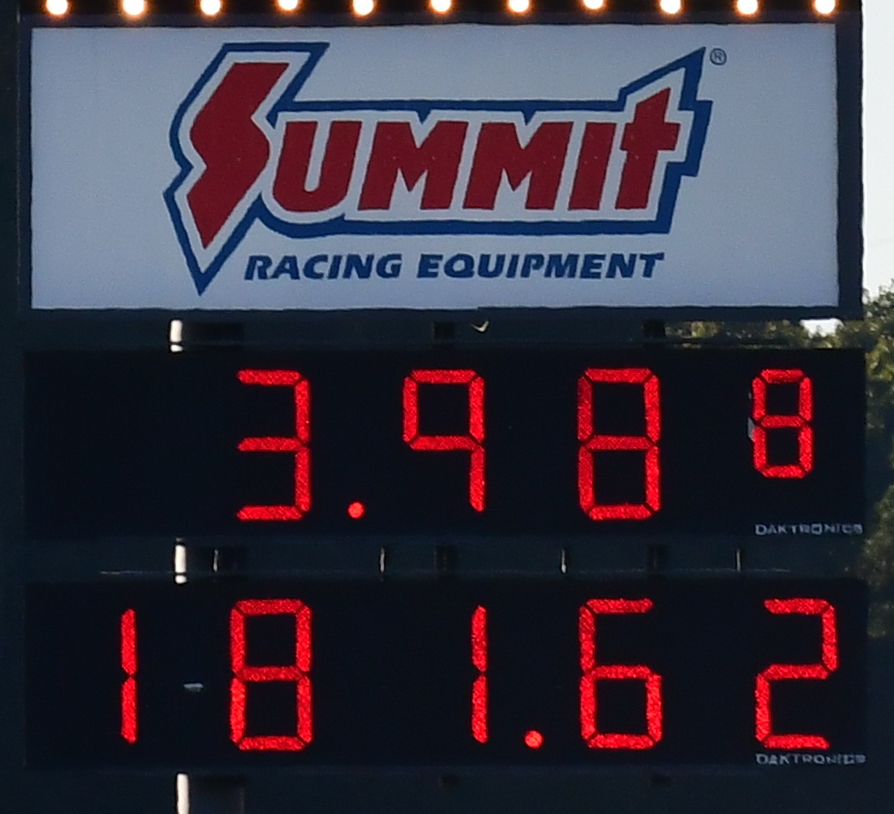 In 2002, he got his Pro Stock break with Jacksonville’s Elijah Morton — as a crew chief.

“He had the funding to go Pro Stock racing, and I crew chiefed for him the first year,” Dobbins said. “He bought the world championship car, the whole rig, everything. I’d never even worked on a clutch before, but I said, ‘If you buy it, I can figure it out.’ I raced that car the next year when he built a new one. We had a good run and won races.”

It would mark the beginning of a pattern that would see Dobbins frequently swap roles as a driver and crew chief. He came within seven points of winning the 2008 IHRA Pro Stock gold but fell just that much short to Pete Berner.

“We can honestly say we gave it everything we had,” Dobbins said.

That was his final season with team owners Jimmy Johnson and Kevin Duncan, and crew chief stints followed by IHRA mountain motor racers such as John Montecalvo and Richard Penland. He next hooked up with Oklahoma competitors Cary and Dean Goforth as a crew chief, and they won four series championships in three years.

By that point and despite the staggering success with the Goforths, Dobbins was ready to hang it up at the end of the 2016 season.

“I was tired of standing behind the car, and I felt like I had accomplished everything I wanted to as a crew chief,” Dobbins said. “The Goforths are fine people, and I love Dean to death, but I was tired of working on the car.”

That’s when he got a call from Larry O’Brien, a longtime mountain motor Pro Stock competitor from Windsor, Ontario, Canada. In short, Dobbins bought everything O’Brien had except the Jon Kaase-built engines, and O’Brien supplies those pieces. Dobbins’ contacts on the Caribbean island of Curacao, Dito DeKort and Ronnie De Mei, wanted in on the program and agreed to provide additional funding to give the team everything it needed to be competitive.

“I raced with the Goforths at such a high level. Money was no issue; an unlimited budget,” Dobbins said. “I knew I could never race at that level for myself. How do you compete against guys that don’t have a budget? …

“I couldn’t afford to do this by myself, but when Larry called me, and Dito and Ronnie wanted to race in the United States, I said, ‘Here’s our chance, boys. We can do this at the highest level.’“

Teaming up with O’Brien put Dobbins back in Mopar gear, which had been his starting point as well as that of his father.

The team grabbed the attention of the mountain motor Pro Stock world last fall with the 3.98 testing shot at Virginia Motorsports Park.

“The first race last year at GALOT (Motorsports Park in Benson, N.C.), we went 4-flat right out of the box in testing,” Dobbins said, “but we couldn’t get that illustrious run all year long ’til we went to Dinwiddie in the fall. That was a 3.98 and 182 in legal trim. It wasn’t during qualifying, so it doesn’t count as official, but we did it.

“We had an aborted run the run before that one, and I knew if we could get it to the finish line, it was definitely going in the threes. When the scoreboard lit up, that was pretty awesome. No matter if it was official or not, we’ll always be the first ones that ever did it. We’d like to have the trophy and the record, don’t get me wrong, but we did it.”

Now the trick and the goal is to do it for the record books. It’ll no doubt be on his mind as the summer makes the transition to autumn, and even then the requisite conditions aren’t assured.

“Everything has got to be perfect. You can’t prepare for it, either, because you only get that weather once a year — if you even get it then. You never know, it could be 90 at Virginia in October.” If and when Dobbins is the first to break into the threes, a big share of the credit, he said, will go to Tom Coon, whom he was able to bring along from O’Brien’s team thanks to the funding from their partners in Curacao.

“He’s been an awesome addition to our team,” Dobbins said. “He actually makes the final, final call because I’m in the car, I’m strapped in, I can’t look at the racing surface, but he can. He knows where we want to be when we get up there, and he’s got to make the fine-tune call. He’s worked out just awesome.

“Just one gram of the clutch is how critical it is or 50 RPMS on the starting line — he’s got to make that call. … We think a lot alike, and we’re making the right calls right now.”

Simply adding high-dollar talent to the payroll doesn’t assure success, Dobbins said. Without the right person for a given personnel situation, a team is spinning its tires and tearing itself apart from the inside.

“I’ve been in them when it’s no good. We’ve got a small crew, but that’s OK because it’s how well we work together and think alike that makes it happen. I’ve been involved in another deal that was unlimited money, but we couldn’t hit ourselves in the butt because we couldn’t get on the same page. You don’t know until you get in that trailer whether you’ll get along with somebody.”

Assuming that chemistry continues to supply the right recipe, the summer has the potential to provide plenty of highlights and win lights for Dobbins. Then comes the cooler, drier air of fall, when he’ll go hunting for the threes again, plus the elusive Extreme Pro Stock crown to place alongside his other national event-win trophies.

“That’s bad that I don’t even know how many it is, but it’s safe to say I’ve probably got a football team worth of trophies.”