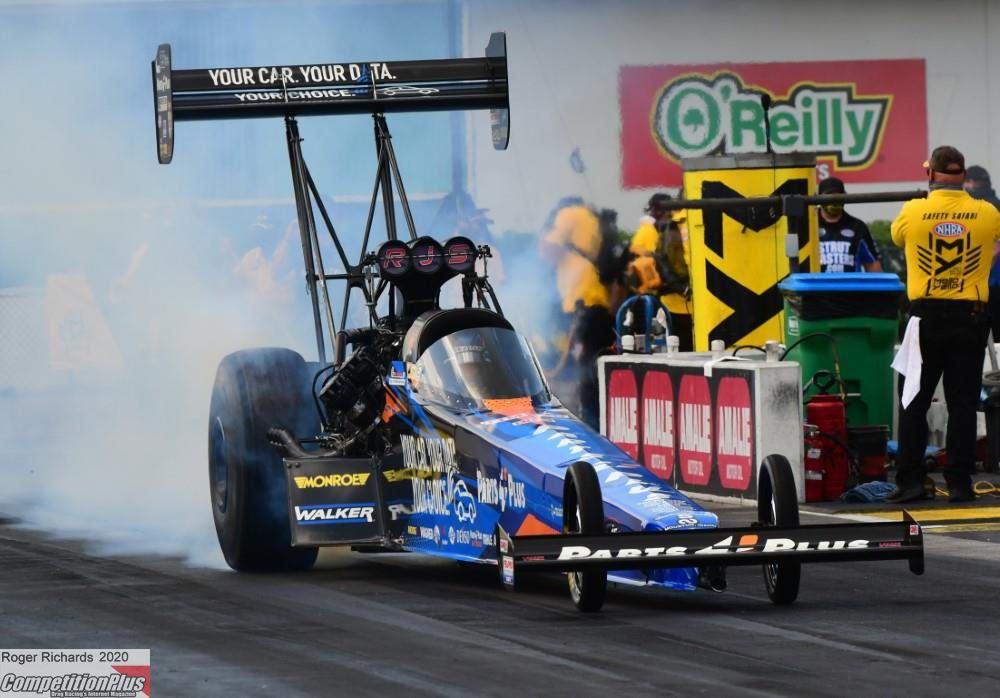 You can take the Top Fuel racer out of bracket racing, but it's extremely difficult to take the bracket racer out of Top Fuel racing. Regardless, Clay Millican and his talented crew chief Mike Kloeber were channeling the days when the good 'ole boy from Drummonds, Tenn., used to drag race with a bottle of shoe polish in hand.

Millican's dragster dropped cylinders during Saturday's second session at the Amalie Oil NHRA Gatornationals, but that wasn't enough to prevent the Parts Plus team from securing the top spot for the second time in the last four races. Millican ran a 3.821, backing up his earlier 3.842.

The dynamic between Millican and Kloeber is one filled with success and longevity. Together the two were a force in IHRA Top Fuel competition, becoming the winningest fuel team in series history before parting ways. The two reunited last season, and it's been a steady process of picking up where they left off.

"I was under pretty strict instructions from Mike and this is nothing new; we've done this together for so long. He's like, 'If it ain't going like Jack the Ripper, shut her off," Millican said. "It's 15 cars, and we had honestly looked at the ladder a little bit trying to decide do we go for it or try to just kind of maintain our spot, and it was kind of surprising that nobody moved a lot.

Just like in bracket racing, Millican understands the value of getting a bye run. Sunday, because there are only 15 Top Fuelers, he's got a solo in the first round.

"That was one thing that we've talked about a lot with the Indy championship series, with all four races there," Millican said. "We qualified great. I think our worst qualifying spot was like number six. We qualified number one, we qualified number two, but we have had the craziest racing gremlins. Some of them were our fault, some of them were not, but we've had things break on the car in Indy that I've never broken in 20-plus years. So we've qualified well and ain't raced worth a darn.

"So at least we can go out there first round and make sure we got our feet under us. That's a good feeling to go to sleep on at night. I'd rather it be 20 cars here; I'll be truthful because our car is running good enough, obviously. But on the flip side of it, when you haven't raced well, this might be what gets you well.

"I lost this race in the final here last year by .005 to Richie Crampton on a holeshot. It's amazing I can't remember a lot of things I've done but you always seem to remember those driver fault losses and that one was my fault. And it was the 50th anniversary and all those things. So would I like to make up for it Sunday? Absolutely."