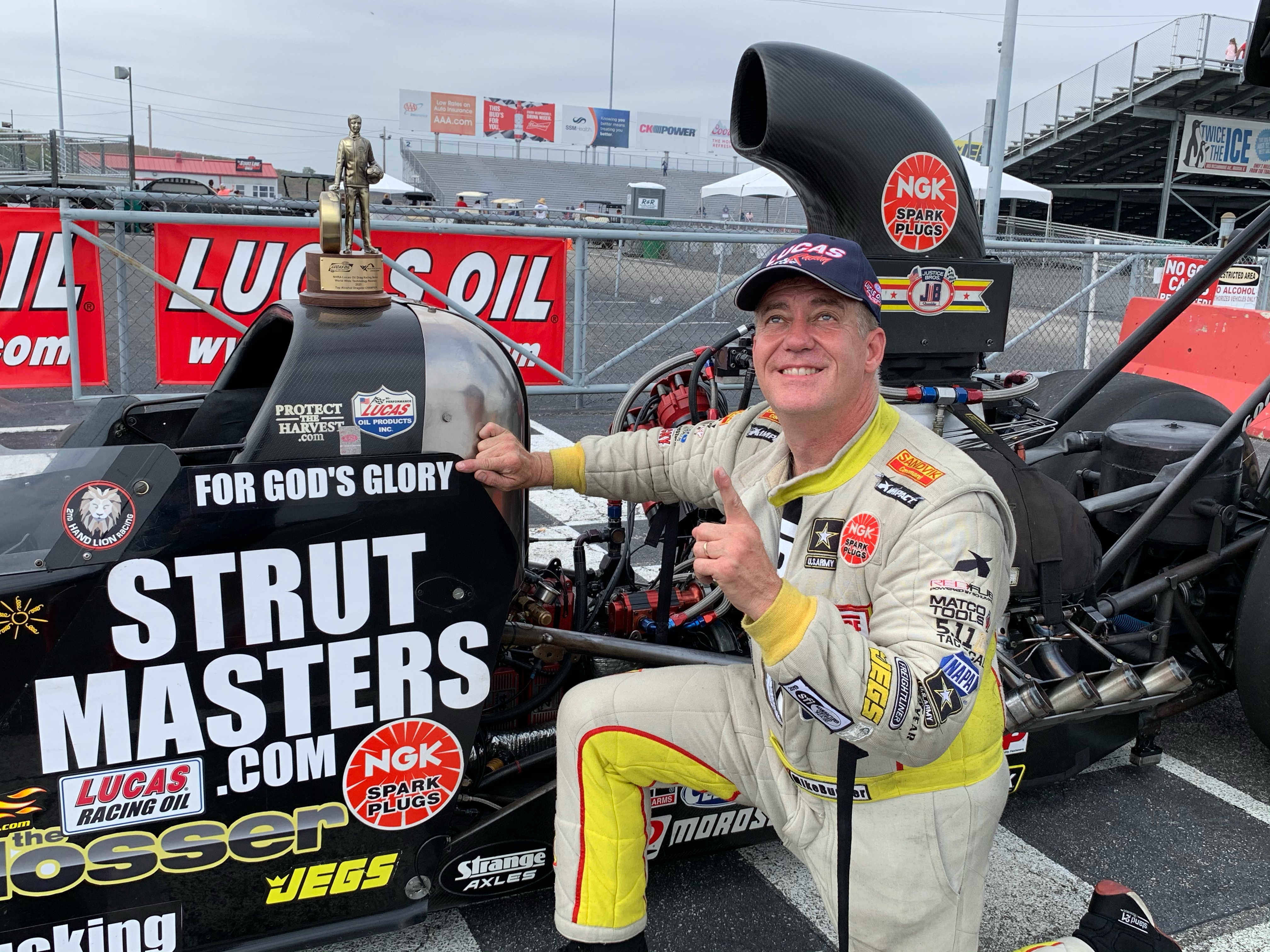 So much for a steep learning curve for Top Alcohol Dragster driver Mike Bucher.

While competing in only 14 career NHRA events since his rookie season three years ago, the 58-year-old won the 2020 NHRA Lucas Oil Drag Racing Series North Central Region title with 235 points earned behind the wheel of Robin Samsel’s dragster. 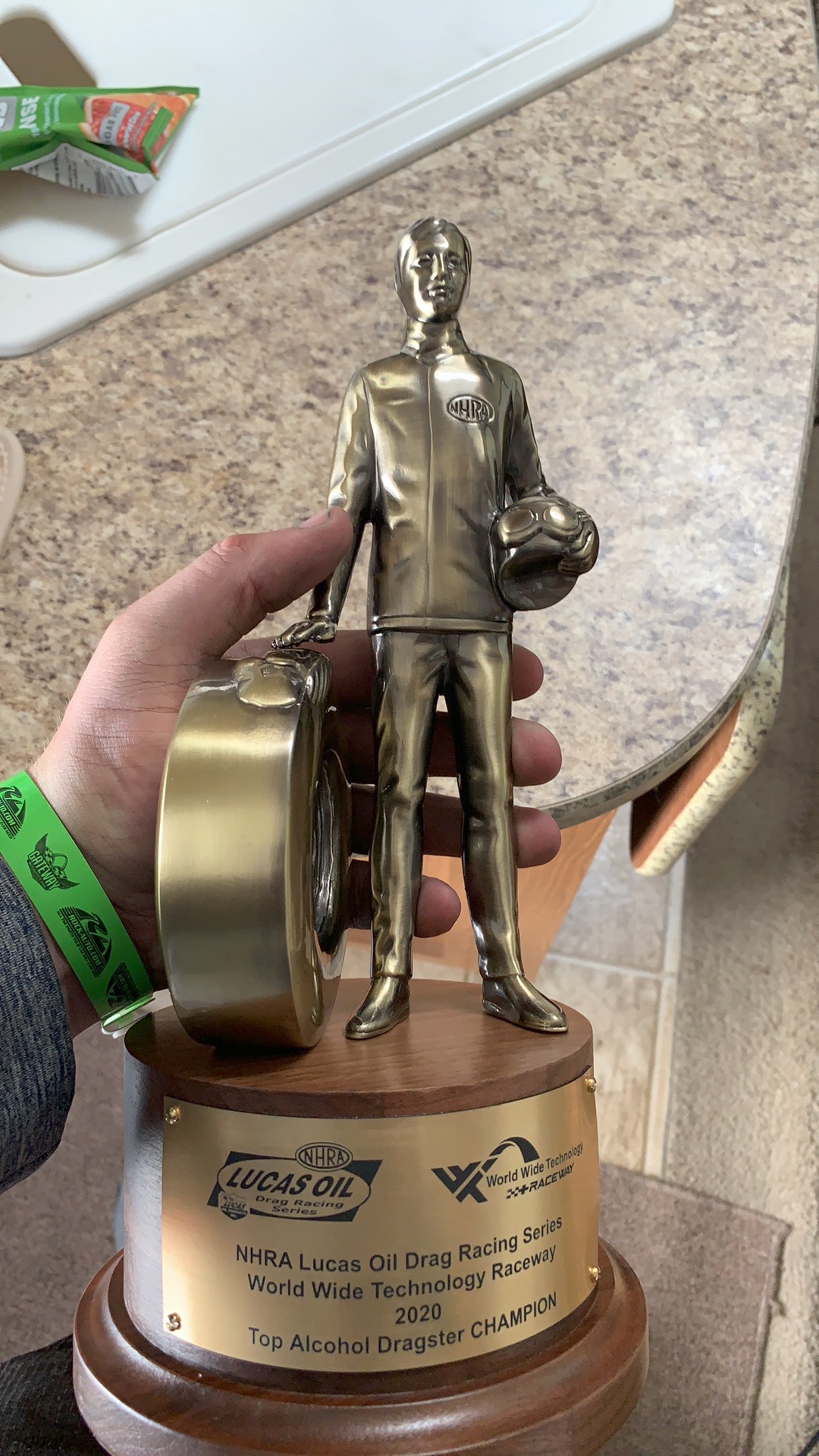 “They shortened how the standings would work this year to best 4 out of 5 races and I only had four races to count and I won it (the North Central Region Standings),” Bucher said. “It was a total miracle. There’s no way that should have happened. If somebody at the start of this year said look at this list and who is the last guy to win a regional championship, it would have been me because I don’t do that many races because I’m a pastor.”

Bucher is the son of Jim Bucher, a popular Top Fuel driver who won the 1975 NHRA Summer Nationals before becoming sick and eventually passing away in 1977 at the age of 37.

Mike promotes and supports the Hope Over Heroin faith-based ministry believing in the power of the Gospel of Jesus Christ to transform lives. Bucher has been a pastor at the Calvary Chapel of Cleveland (Ohio) for 28 years.

In 2020, Bucher, while driving for Samsel Racing, competed in the regional event in Columbus, Ohio, and lost in the finals to eventual world champion Megan Meyer. He then advanced to the semifinals in regional races in Indianapolis and Bowling Green, Ky., and then the last weekend of September he won the race at World Wide Technology Raceway in St. Louis.

“When I put that visor down and step off the clutch, I feel the presence of the Lord,” Bucher said. “I feel his presence so much in the car that I can feel his heartbeat. He’s right there with me in the car.”

In the final round at St. Louis, Bucher defeated Jared Dreher, which was Bucher’s inaugural race win. Bucher’s first final-round appearance came in March of 2019 when he lost to Meyer at the Gatornationals in Gainesville, Fla.

“When I won the event in St. Louis that also clinched the North Central Region championship by 11 points (over Julie Nataas),” Bucher said. “If I lost that final, I would I have lost the regional championship, so it was a double win.

“I started racing with the Samsels last year. You have dad (Robin), son (Tony), and grandson with this team, and they explain things and Tony Samsel is the best non-driver teacher of drivers who I have ever been around. I also would not be where I’m at (in racing) without what I learned at Frank Hawley’s School.”

“I was never more nervous than I was before that (final round),” Bucher said. “It was my third (career) final round and the guys were doing so well and I didn’t want to screw up. I was sitting in the car and I was like OK Holy Spirit you have to do this. I know it is the Lord helping me because I shouldn’t be doing what I’m doing.”

Bucher is not sure yet what his 2021 racing schedule will look like.

“I’m a pastor with 14 kids and I don’t have any money,” Bucher said. “In 2020, I had Chip Lofton of Strutmasters, Bill Stuart, “The Glosser,” Gene Lampshire TFC Transportation, Dave Nelson of Nelson Trucking, Becky Elias Mufflers for Less, Mike Ashley Realty Warehouse, Brian Corradi of Master Pizza and Josh Hart of Burnyzz Speed Shop helping me out. I can’t do this without them.

“My dream is for somebody who owns a car and wants to race and doesn’t want to drive. My ultimate goal is to drive a Top Fuel dragster, but that’s a huge step money-wise. A-Fuel is the closest thing to Top Fuel that I can drive right now.”