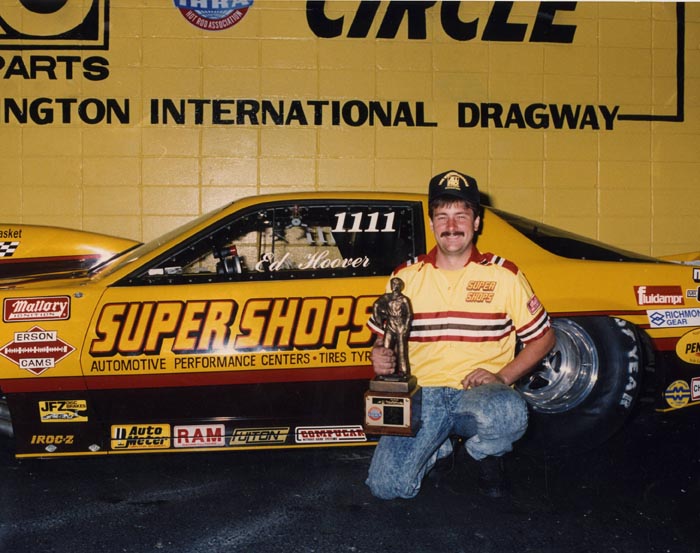 Veteran drag racing journalist Dave Wallace has witnessed some of drag racing’s finest moments over the course of his lengthy career, but his assignment on March 14, 1990 went beyond anything he’d seen before. 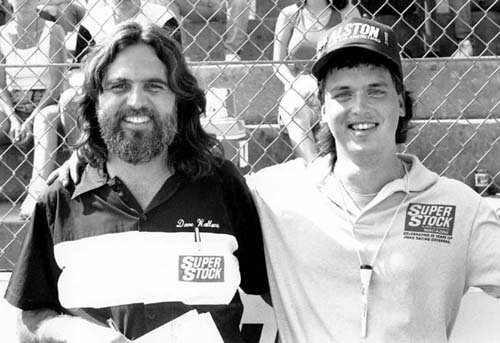 Dave Wallace (left) poses with the author during the 1990 IHRA Winternationals in Darlington, SC. The veteran journalist believes the birth of Pro Modified had an "outlaw" feel to it and that's what made it a hit. (Ron Lewis)

Wallace was on assignment for legendary drag racing publication Super Stock & Drag Illustrated to cover the first new professional drag racing trend since the Funny Cars of the late 1960s.

Wallace grew up on the west coast where dragsters were king, and anything with doors were intended as street vehicles and not drag racing icons.

Wallace, a near five-decade veteran of drag racing [he started young], admitted there was a lure to the southeastern phenomenon of quick and fast doorslammer racing.

“I had never really felt compelled to follow a circuit until the Pro Modifieds,” said Wallace, former Hot Rod Magazine staffer who later edited Petersen’s Drag Racing. “When I went to the first IHRA Pro Modified race in 1990, I felt like I was witnessing something special. That whole movement [Pro Modified] was spectacular.”

Along with a historic value, Wallace remembered a special feeling which permeated the atmosphere in Darlington, SC, during the IHRA Winternationals.

RESULTS FROM “THE FIRST"

“There was an outlaw feel to it,” explained Wallace. “It wasn’t like the typical class racing … it was outlaw … it was like Bakersfield in 1959. There was an anti-establishment feel to it that really appeals to me. You felt like they were outside of the rules, except for safety.”

Two years of running on Saturday nights as “pseudo” professional racers in Quick Eight events had finally led to their own professional eliminator. There was no more having to race on Sunday in Quick 32 bracket action in order to get paid for the Saturday participation.

No more of the full tree qualifying. No more parking in the grass.

They were full-fledged professionals much to the chagrin of the Pro Stock teams who resisted the Pro Modified movement like a stomach virus.

“Those guys can say what they want to, but they hated us from day one,” Bill Kuhlmann added.

Kuhlmann joined the Top Sportsman movement in the midst of a successful United Drag Racers Association [UDRA] Pro Stock career. He is credited with winning the introductory Pro Modified event in Atco, NJ., before the class was even named.

“We had respect from all the classes from Top Fuel from everybody at the IHRA,” Kuhlmann added. “Everybody except for Pro Stock.”

A prime example of their disdain transpired within a driver’s committee meeting with every professional category, including the new Pro Modified division.

In a meeting where each class was afforded a representative to air their grievances or opinions regarding their classes, one Pro Stock driver suggested their mountain motor cars needed larger wings and two parachutes. He was quickly reprimanded by a member of the Pro Stock fraternity, one who would later become one of the future owners of the IHRA.

“You ain’t getting that because you’ll look like one of those d*** Pro Modified cars,” the future executive scowled.

The Pro Modified teams, or at least those at the forefront of the movement, didn’t let the attitude bother them.

Kuhlmann was one of those who saw the big picture and did his best to ensure his fellow Pro Mod racers did too. 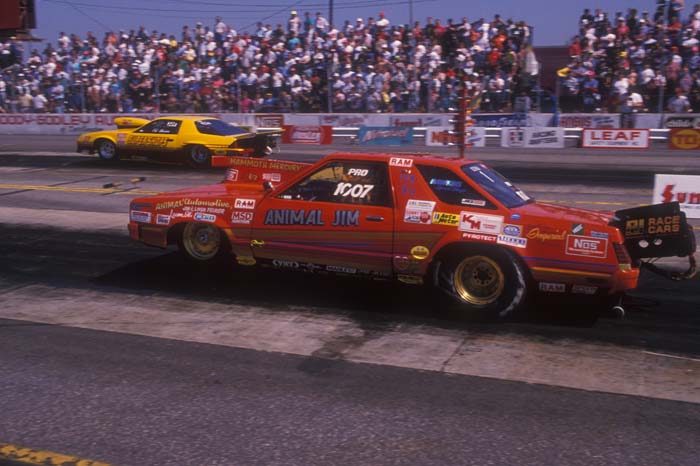 Every time Jim Feurer drove the Mercury, he made it an adventure largely due in part to the car’s chassis having reportedly over a thousand passes. His only qualifying run at the 1990 IHRA Winternationals was truly a sight to see.

“It wasn’t different for me because I had been professional racing in the UDRA for a few years before that,” Kuhlmann said. “I spent as much time telling other guys, schooling them on the things they needed to be aware of. Trying to polish up their acts and make sure the whole thing was successful.”

His time racing in the UDRA came in handy when leading by example.

“I just wanted to make sure that some of the guys didn’t bring the class down by doing something unprofessional,” Kuhlmann added.

Clearly the one aspect which made these rookie professionals a hit was their showmanship.

“Animal” Jim Feurer, flamboyant in a unique way, brought his unique level of showmanship to Darlington. He was also sporting his trademark pink sunglasses and high top sneakers.

Feurer wanted to be part of the historic first field and was willing to do what it took, even if it meant crashing really bad. The former AHRA Pro Stock hitter was forced to bring his Mercury Zephyr to the first race when his new car was unfinished.

Every time Feurer drove the Mercury, he made it an adventure largely due in part to the car’s chassis having reportedly over a thousand passes. He had crashed the car many times [insert sarcasm] but never hit anything. 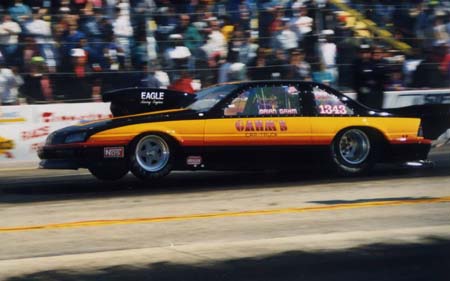 Brian Gahm, a multi-time mountain motor Pro Stock champion, was one of the 16 qualifiers at the inaugural Pro Modified event.

Friday’s qualifying for the first race was washed out leaving only two runs on Saturday. Breakage in the first run left Feurer with only one shot to earn a spot in the field.

Feurer launched the car and the subsequent tire shake rattled the driver’s door open. Instinctively Feurer reached up and grabbed the door to hold it shut, all the while pulling the Lenco levers.

And the steering wheel?

Ironically, in the opposite lane was a diesel repair shop owner from nearby Columbia, SC., who had been a part of the Pro Modified movement dating back to Top Sportsman and the Carolina Quick Eights.

Ed Hoover would go on to win the first event defeating eventual world champion Tim McAmis, who broke on the starting line.

Hoover won the event from the No. 3 qualifying position, behind Mike Ashley and Kuhlmann. 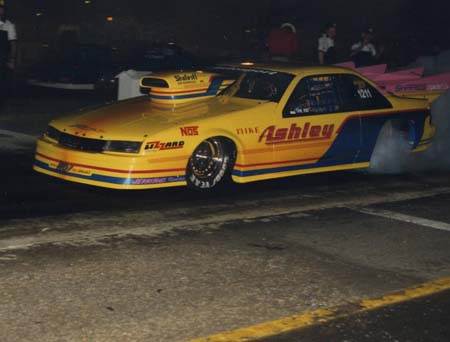 Mike Ashley was the No. 1 qualifier for the first event, but his day ended when his car broke against Ronnie Sox.

“That event was nothing but exciting, and I have to admit, if Tim McAmis hadn’t hurt his engine, he would have been a handful to run,” Hoover said. “We were both running good that weekend. As it turned out, winning that race will always be a bright part in my career.”

Hoover will always consider the win to be sufficient compensation for missing the first 200 mph run at 199.21. A broken engine mere feet from the finish line also cost him the first-ever six second pass in doorslammer history. He was the car before Tommy Howes, when the barrier was broken.

Nothing, Hoover contends, was going to rob him of winning that first race in 1990.

“I knew I wanted to win, but the magnitude of it didn’t hit me until well after the event was over,” Hoover added. “We had run the Quick Eight events and won a few of them, so it didn’t immediately register to me. I guess you never really believe that as a drag racer you will end up one day in a trivia question. I guess I was just happy to win a drag race.”