LINE WINS AT HOME TRACK, DSR DOUBLES UP AS PRITCHETT AND CAPPS ALSO WIN AT BRAINERD 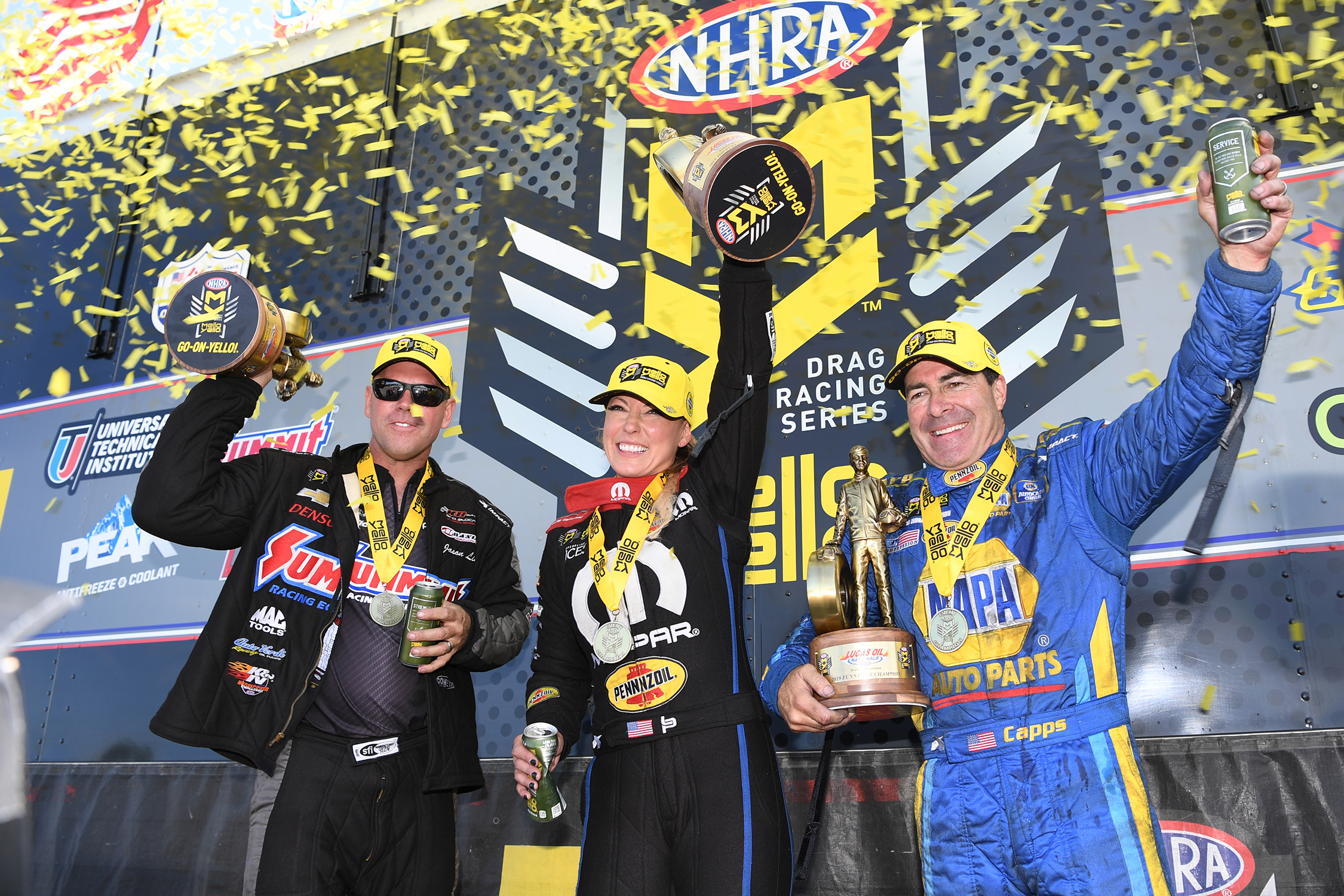 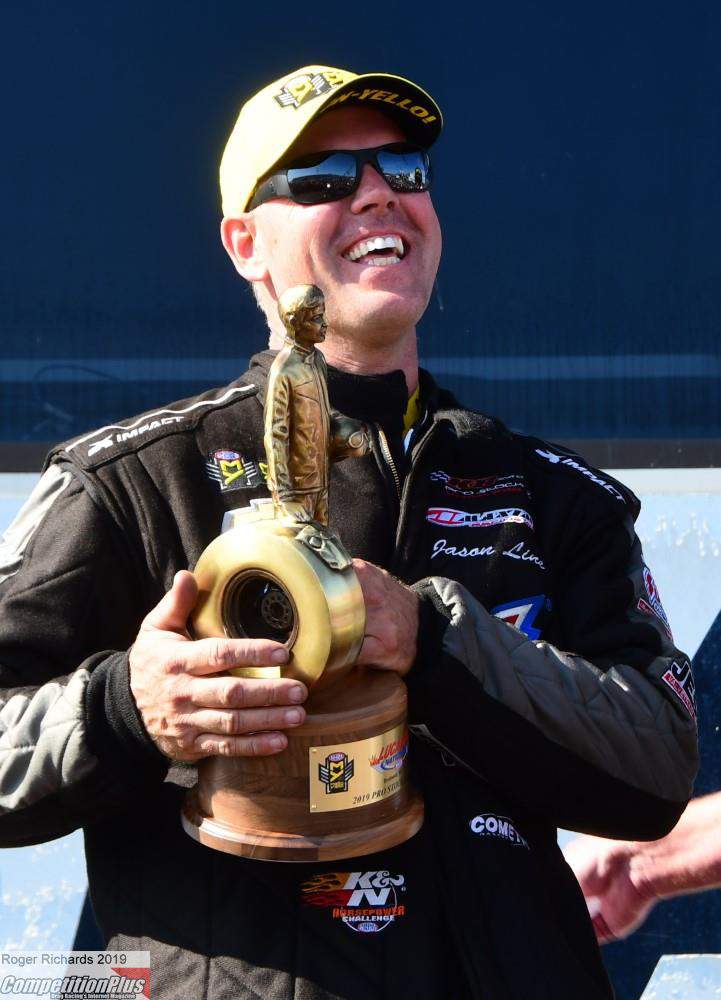 Minnesota native Jason Line won a race for an NHRA-record 16th straight season on Sunday, racing to the wire-to-wire victory at his home track during the 38th annual Lucas Oil NHRA Nationals at Brainerd International Raceway.

In other racing, it was a double-up victory for Don Schumacher Racing for the first time in 2019, as Leah Pritchett (Top Fuel) and Ron Capps (Funny Car) won in their respective categories at the 17th of 24 events on the 2019 NHRA Mello Yello Drag Racing Series schedule.

Line, the No. 1 qualifier, used a run of 6.597-seconds at 209.10 mph in his Summit Racing Equipment Chevrolet Camaro to beat Erica Enders’ 6.604 at 207.59 in the final round. It is Line’s 49th career victory and first in 2019. It is his second career Brainerd win, but Sunday marked the first time he could celebrate at his home track, as his 2014 event win was completed in Indy after a rain delay.

Line knocked off Wally Stroupe, Alex Laughlin and Deric Kramer to reach the final round. Enders, the No. 2 qualifier, beat Shane Tucker, Chris McGaha and Seattle winner Matt Hartford to reach her 48th career final round, but Line edged her out to grab the memorable win in front of family and friends.

“This is very cool,” Line said. “As we get older, you realize these moments are going to be few and far between and less chance of them happening, so it’s very special. Right now it feels special, but it’s going be feel more special later on, for sure. It was just a great weekend and a fun day. We had a great car and you want to win here in front of your friends and family. To see them and see how happy they are, it’s super special. This place has been a big part of our lives.” 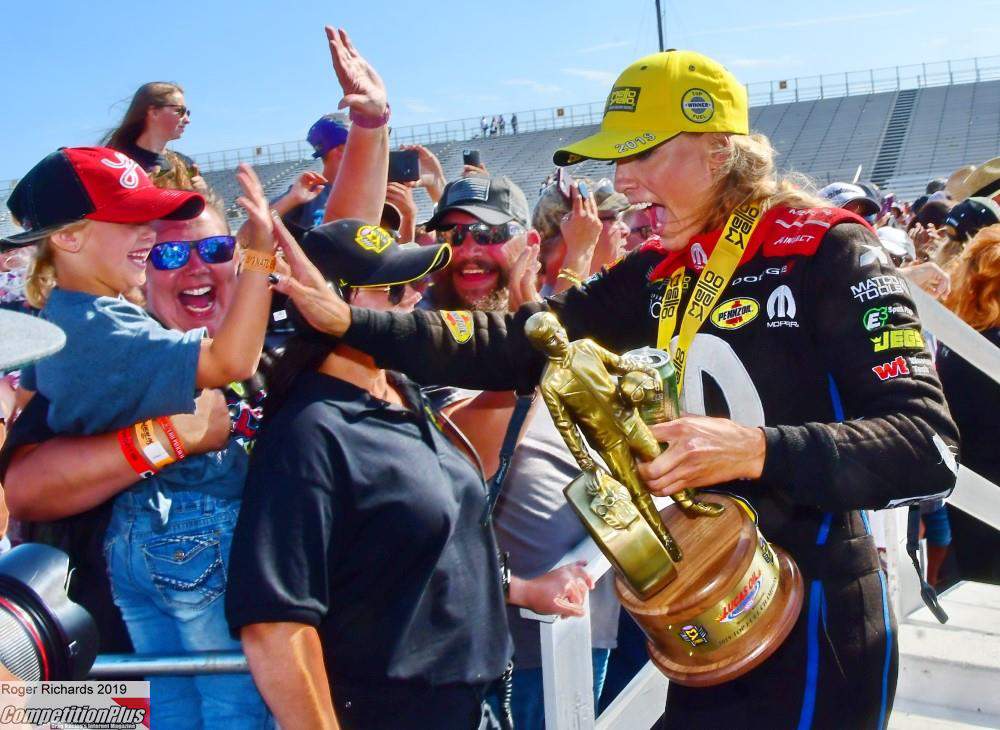 In Top Fuel, Pritchett picked up her first win of the season and eighth in her career thanks to a 3.732 at 321.04 in her MOPAR Dodge dragster, sending her past Mike Salinas in the final round. Pritchett, who earned her second career Brainerd win, knocked off Kyle Wurtzel, defending event winner Billy Torrence and Seattle winner Austin Prock to reach the final round.

Salinas got past Luigi Novelli, Clay Millican and Doug Kalitta to reach the final round for the fifth time in his career. Pritchett’s victory is the first Top Fuel win of the season for DSR, and the nitro double-up for the team comes a race after rival John Force Racing did the same in Seattle.

“I was proud to be the one to put on the final win light (today) for DSR, and this is the perfect time to be able to get the momentum for our season,” Pritchett said. “Looking at the time sheets, we made four incredible runs and that’s something that the crew chiefs have been able to do consistently, and it’s coming together at the perfect time. Between the racecar that we have, the team and what we’re asking it to do, (the car) is performing beautifully, and I couldn’t be more happy.” 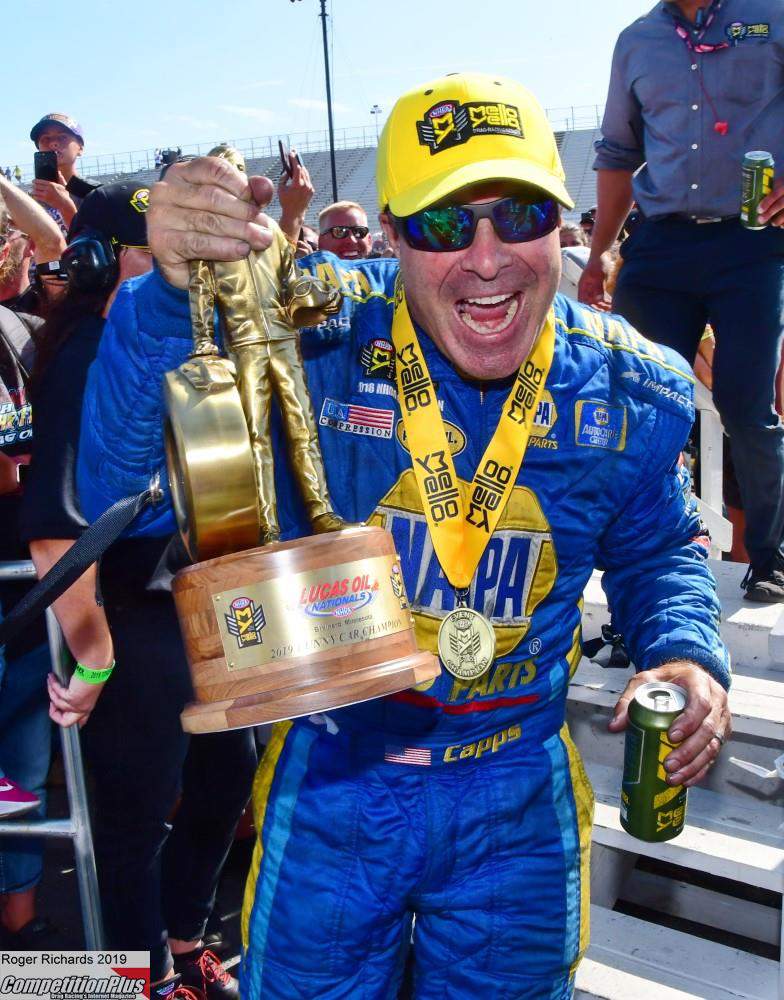 Funny Car’s Capps won for the sixth time in Brainerd, going 3.946 at 324.28 in the final round in his NAPA Auto Parts Dodge Charger SRT Hellcat to beat DSR teammate Tommy Johnson Jr.’s 3.947 at 319.98. It is Capps’ third win in 2019 and 64th of his career. Capps beat defending world champ J.R. Todd, Jack Beckman and Shawn Langdon en route to the finals, while Johnson drove past Tim Wilkerson, points leader Robert Hight and No. 1 qualifier Matt Hagan to reach his 52nd career final.

Capps fell to longtime rival John Force in an emotional final round in Seattle, a race that gave Force his 150th career win, but Capps rebounded in impressive fashion on Sunday at one of his favorite races on the NHRA circuit.

“I had my hands full today,” Capps said. “This is a race that we circle on the calendar because it’s fun, but you want to race this race and get the finishing touches on your tune-up. This is a crucial and they’ve done such a great job here. Both lanes are equal and you really want to have your act together leaving this race. I’m so happy we've had great success here and we had a great running car today.”