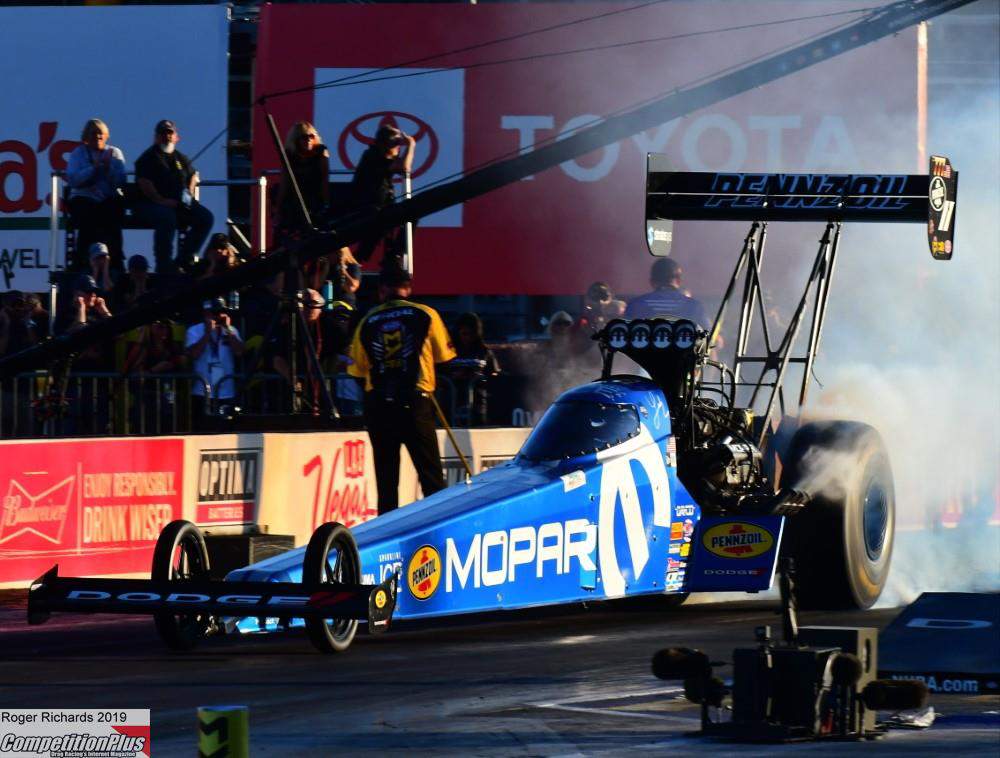 Leah Pritchett has seemingly been on a roller-coaster ride this season with highs and lows of emotion.

Nonetheless, with two races remaining Pritchett arrived in Las Vegas for the NHRA Nationals presented by Pennzoil at The Strip at Las Vegas Motor Speedway fifth in the points standings – 104 behind leader and reigning world champion Steve Torrence.

Pritchett did her best to keep the pressure on Torrence by qualifying No. 1 with a track record-setting lap of 3.654 seconds at 329.83 mph in Don Schumacher Racing's MOPAR Dodge Top Fuel Dragster in Q4 Saturday at The Strip.

This was Pritchett’s first No. 1 qualifying position of the season and 12th of her career.

“It was a phenomenal pass,” Pritchett said. “It started out with attitude and a plan that we had coming into the weekend and that was about execution. I knew when I hit 330-feet that we were going to be on a run. We were trying to be the quickest of every round, and we made three consistent runs out of four. We knew what this car was capable of, and we put everything on the line to get those bonus points.

To be No. 1 at the Dodge Nationals presented by Pennzoil is phenomenal,” added Pritchett. We have all of the support here. Our pit is full; we have all of the energy; it’s our first No. 1 of the season, and we just hope to carry this momentum into (Sunday).”

Pritchett was runner-up at this race a year ago to Steve Torrence. She has eight career national event wins.

Pritchett will take on Cameron Ferre in the opening round.

“A No. 1 qualifier is a great high, but I know like a roller-coaster there are great things to come for us,” she said. “The big turn for us hasn’t happened yet and that would be another win for us. I would say it could have been a lot more frustrating if it wasn’t for the people who are on this team and the attitudes that we carry and to dig deep. Coming into this race, it’s not trying to defend where we are at it is literally coming here and wanting to leave with no bullets left, giving everything, we have and everything we have learned all year from hot tracks to cool tracks. Hopefully at the end of the season, there will be some good stories to share if this turns out exactly the way we want.”