INCIDENT AT JACKSON DRAGWAY BRINGS FLASHBACK FOR GWYNN OF 1974 TRAGEDY 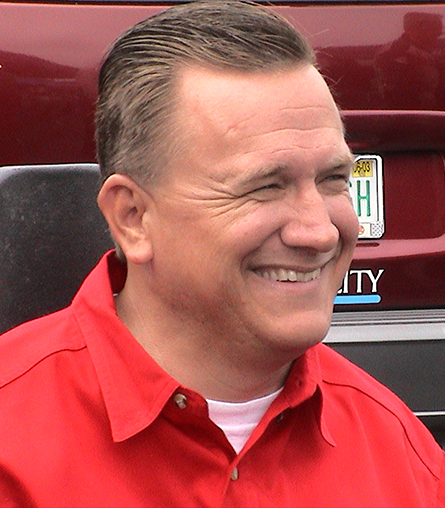 That was the Friday night when Gwynn, then 13, was standing with a group of people in the staging lanes at Miami-Hollywood (Fla.) Speedway Park. In a flash, the good-natured camaraderie among the racers, their crews and families turned into a scene of screams, blood and the death of another 13-year-old also named Darrell.

“It’s something I think about all the time because it happened right in front of me,” said Gwynn, who saw his friend, Darrell McDaniel, die.

Like Gwynn, McDaniel was the son of a local south Florida drag racer. The teenaged boys were friends who frequently crossed paths at their local track.

That Friday night in 1974, a spectator drove a car driven the length of the track in the wrong direction and slammed into the crowd standing behind the burnout area of the track. A local newspaper, the Fort Lauderdale News, reported that three persons were injured in addition to McDaniel’s fatality.

That memory rushed to the forefront of Darrell Gwynn’s mind Monday morning as he read about a similar incident at Jackson (Tenn.) Dragway last Saturday. A passenger car drove the wrong way down the dragstrip, but instead of injuring spectators or the two racers strapped into their cars at the starting line, the driver slammed head-on into the concrete barrier in which the Christmas tree was erected.

“I read that story and thought, ‘There’s not a lot of people who know what I saw,” Gwynn said Monday. 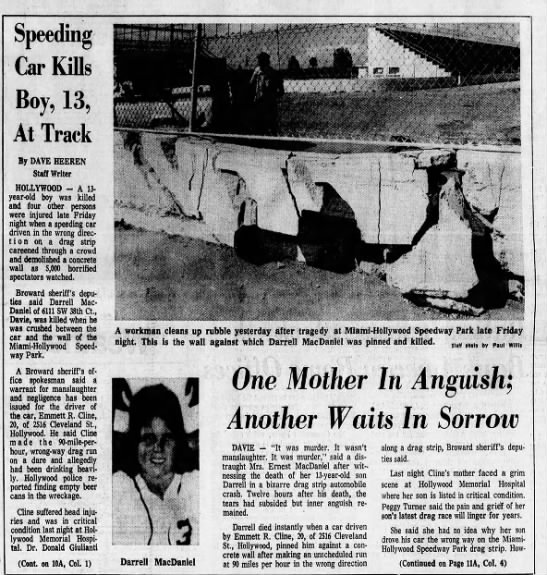 Darrell Gwynn was one of some 5,000 people in attendance at Miami-Hollywood that Nov. 1, there to watch his father in action. Jerry Gwynn was next in line to run right after a quarter-mile run by a wheelstander.

Darrell, who would go on to win 17 NHRA national events as a Top Fuel competitor and the 1983 Top Alcohol Dragster world championship, remembers that the event at Miami-Hollywood was “probably” a big show put on by the track each month. Those races would feature Funny Car drivers such as “Jungle” Jim Lieberman, Dale Creasy, Bobby Woods, Paul Smith and others, plus wheelstanders and jet cars.

“I remember it being pretty crowded,” he said. “That place was crowded all the time. All the dragstrips were crowded in the ’70s.”

The control tower at Miami-Hollywood stood behind the track and its burnout boxes, and a concrete wall separated the tower from the track itself.

“They used to have a return road right next to the dragstrip that you drove all the way down, and that’s where the staging lanes were for the cars. You do a U-turn to come onto the track, and we were the next car,” Darrell Gwynn said. “That wheelstander guy -- it was either Bill’ Maverick’ Golden or another of the wheelstanding trucks -- and all of a sudden this Mustang, a ’66 or ’67,  came out of nowhere, just hauling ass, going the opposite way.

“It came right down the racetrack. It went in the other lane, right past the wheelstander. … There’s a wall behind the starting line, and the whole thing was lined with people. People scattered and some got caught up in it, some got away.”

Darrell McDaniel was one of those hit by the car, and he died instantly when he was crushed between the Mustang and the wall, the News reported.

“His dad was Ernie McDaniel, who was a many, many time track champion to prior that happening and after it. … His mom was there, his dad was there, his mom’s screaming Darrell’s name and everybody’s wondering if it was me,” Darrell Gwynn said.

“It was a horrible, horrible evening. Me and my high school friends that came out to watch my dad race, we were all standing together and witnessed it. … People were trying to help everybody that was injured, and I don’t want to say that people to kill the guys that did it, but they were having to be protected themselves, you know?”

Gwynn got a vivid reminder of that horrific night in June when he attended the NHRA Thunder Valley Nationals at Bristol, Tenn. It was there that he crossed paths with Darrell McDaniel’s brother, Ernie Jr.

“I told him, ‘I can’t tell you how much I think about that night,’ “Gwynn said. “We didn’t go into any details, but we both remember it like it was yesterday.”

He added, “I never thought I’d see something like that. Of course, you live long enough, you’ll see just about any damn thing. That was one thing that just blew me away at the time.”

And obviously still does.