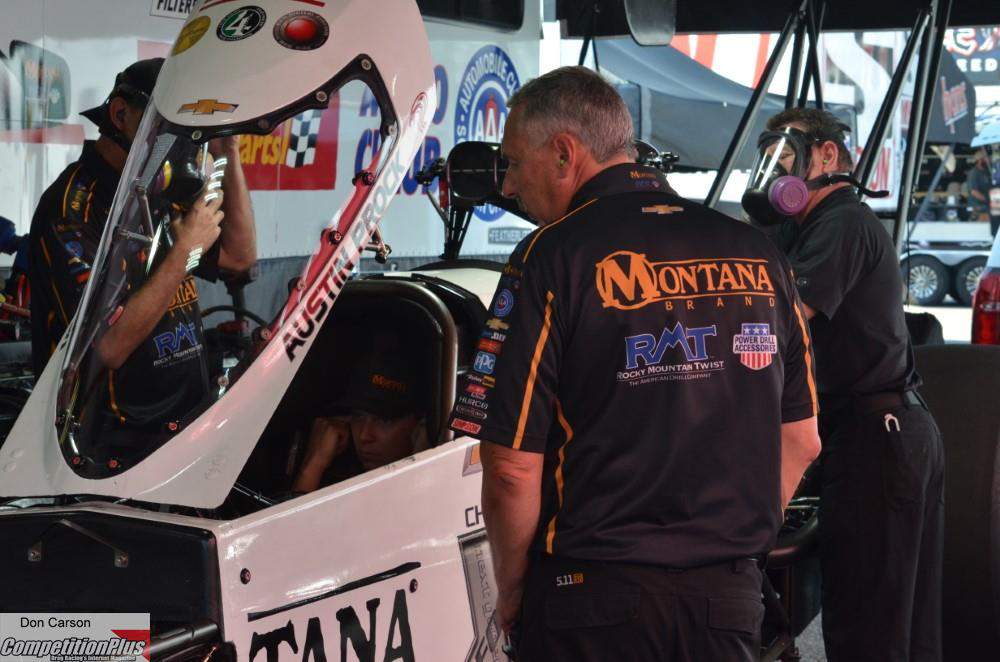 Green began the season as the co-crew chief for Bob Tasca III’s nitro Funny Car team. On May 7, Green departed Tasca’s team and joined John Force Racing as the crew chief for the Top Fuel dragster driven by Austin Prock.

In Green’s first race with JFR, the Virginia Nationals last weekend in Richmond, Prock qualified No. 10 (3.824 seconds) and beat Richie Crampton in the first round before losing to Mike Salinas in the second round.

“It’s good,” said Green about his new job with JFR. “They have a great group of guys here, so it sure helped getting caught up. With Ronnie Thompson here and the core group of guys it made the transition pretty good.”

Prior to his stint at Tasca, Green was the crew chief of the U.S. Army Top Fuel Dragster for eight seasons and he guided Tony Schumacher to 27 event titles and world championships in 2009 and 2014.

Before he joined DSR prior to the 2008 season, Green worked at Don Prudhomme Racing, Darrell Gwynn Racing and Joe Gibbs Racing. As a crew chief, Green had led drivers to 50 wins – nine in Funny Car and 36 No. 1 qualifying positions.

“I spent a lot of time at the shop getting ready for that first race (at Richmond),” Green said. “Force has all their own stuff. It’s not like Schumacher’s or Alan Johnson’s or anything. It was a pretty steep learning curve, but the guys over here helped out a lot.”

Although Green has plenty of experience in Top Fuel, he still had to adjust to his new role.

“I think I do,” said Green when asked if he had to shake off some Top Fuel cobwebs. “I like working on Funny Cars and dragsters, but I have to say I’ve had more success in dragsters. I’ve won some Funny Car races as well, and I like them both, but I feel very comfortable here (at JFR) in this short period of time anyway. We went to that race (the Virginia Nationals) and we thought about testing because we had a lot more stuff we wanted to do and work on the car and change a few things, but we have four races in a row, so it is hard to go out testing in the next month.”

Green said the break in the action until the next event – the Route 66 Nationals May 30-June 2 in Chicago – will benefit him.

“The guys are off and they have a long weekend, but I’m here working,” Green said. “It helps getting caught up on everything and making sure everything is in order the way I will understand it.”

“Jimmy and I worked with each other at DSR for a couple of years and he has been a big help to me,” Green said. “He told me whatever I need, he will help me out. Austin is an accomplished race car driver, but on the drag racing thing he seems sharp. He knows where he is at in the car and seems focused on getting the job done. I’m excited to work with him.”