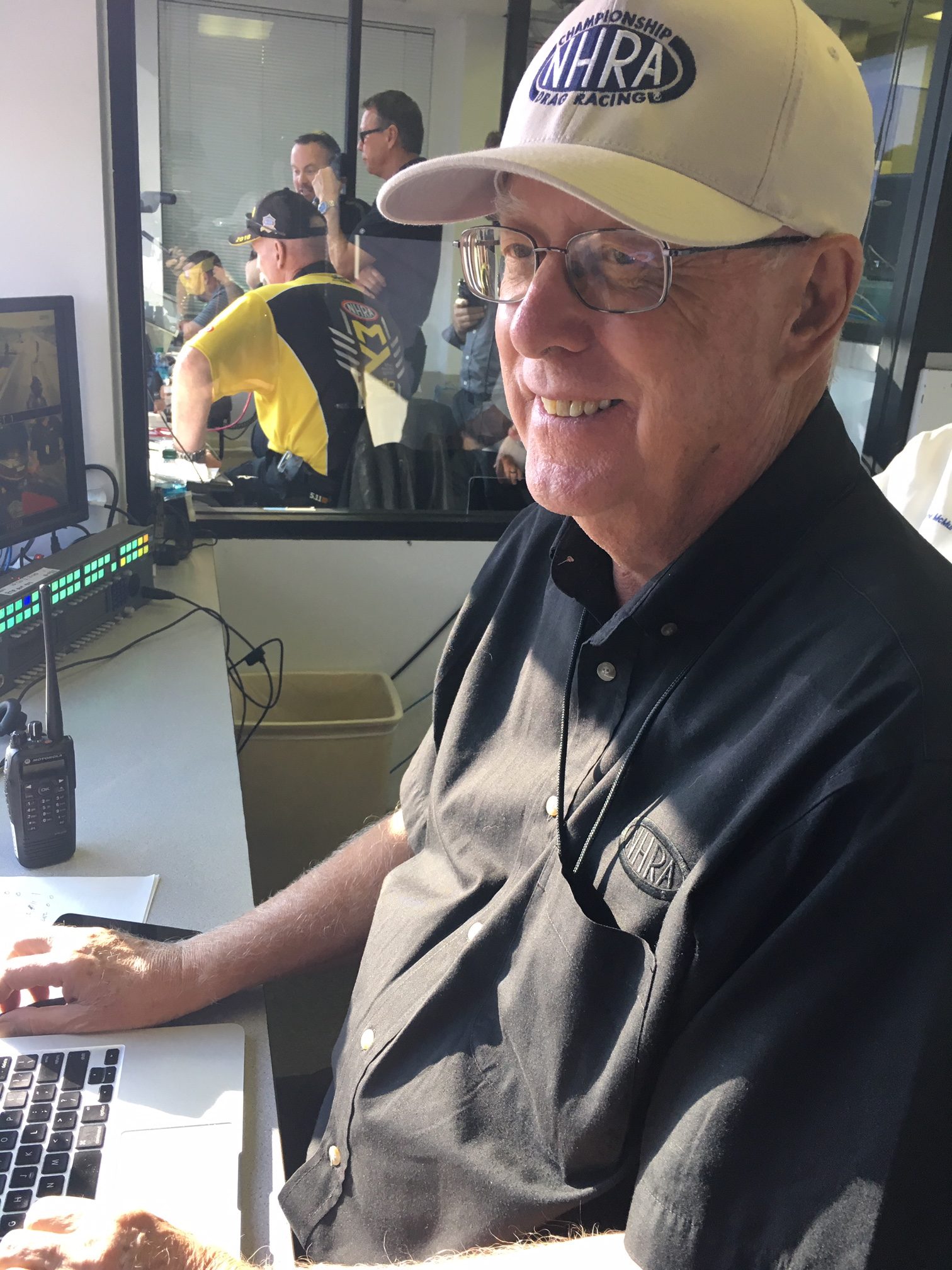 As much as Graham Light tried to convince himself Sunday, November 11, 2018, was just another day on the job he held for the last three decades, the look on his face told another story.

The finality in his attempt to answer a question from a reporter appeared to be a canned response. Even up the last day on the job, Light was still toeing the company line.

"Quite honestly, I'm focused on the job at hand, another race, and let’s get this thing in, get it safe, end up with some winners about four o’clock and conclude a very successful 2018," Light said.

Light admits sentimentality is something everyone has to a degree.

There just wasn't room for it on this day, races had to be run, champions needed to be crowned, and someone needed to ensure the show went smoothly.

For the last 25 years, this has been Light's role, and it's one he's taken seriously. Light has worked with the NHRA for the last 34 years in one capacity or another.

"I will remain on the board of directors so I’ll have certainly a role in NHRA going forward," Light said. "I am going to do some special projects maybe some of our international activity which will keep me involved somewhat. I live not too far from the office so I’m certainly going to go down there and try and get a free lunch once in a while from the guys and gals.

"I’m going to attend a few events, obviously come to Pomona. I want to go to Gainesville next year to the 50th. It’s not like I’m totally removing myself from the sport."

Long before the NHRA Management made its way onto his resume, Light was a Top Fuel drag racer, reaching the final round of the 1977 NHRA World Finals in Ontario, Ca. He also served as a track manager at Edmonton International Raceway, a position which also opened up a small acting role in the drag racing-themed movie "Fast Company."

"I’ve been in this sport in one capacity or another since the early ’60s as a competitor and spending my play money on race cars and going to races," Light explained. "Just feel very fortunate that I was able to, through luck and a lot of good people helping me along the way, I was able to convert that from a hobby to a livelihood. Feel very fortunate." 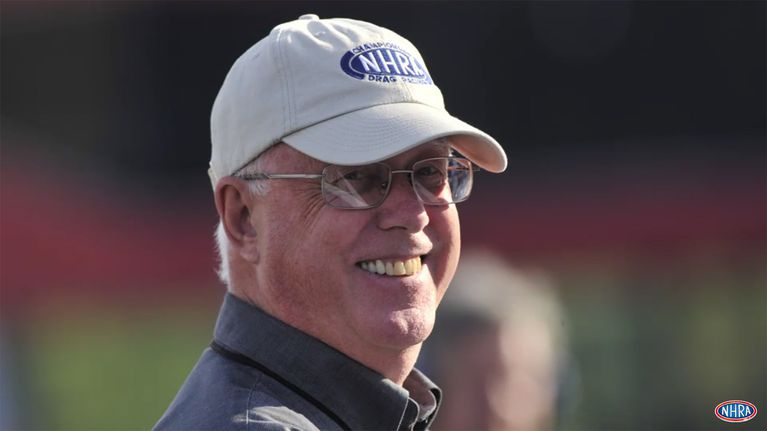 So what would drive Light, a man who admits he's always hated conflict, to take a job where 24/7 his name is continually besmirched and he's blamed for every issue in drag racing?

"That’s a good question," Light responded, cracking a smile. "I think as time goes on, you learn. I guess it depends on where the attacks come from, we see attacks from anonymous people on the internet and some of the facts they have are totally untrue and you just discount those. You learn to just quite frankly don’t even read them is probably the best bet.

"You know, initially when you get into disagreements with teams, racers, crew chief, driver, owner, whatever, it sticks with you because we got into this sport as friends of these guys and gals and we’ve got relationships. But in time what you learn is that everybody out here is extremely competitive otherwise they wouldn’t be here. They want to win this race, they want to run the world record, they want to dominate the class, and that’s their goal. That’s what they’re aiming for, that’s what I aimed for when I raced.

"So you’re competitive by nature and anything that a decision that goes against you, you’re upset, you’re frustrated, you’re mad. You’re trying to argue to get the decision reversed because of your competitive nature. But what I’ve learned is you can get into a heated battle with somebody at this race and by next race, it’s forgotten. It’s like we closed, that chapter is gone. We open a fresh page and here we start at the next race. In most cases, that’s what I’ve experienced with the racing fraternity. Not all cases, but in the majority of them, it’s ok, that race is behind us, let’s move on."

Light learned early in his job as VP of Operations at NHRA, thick skin is not an option its a necessity.

"Doesn't take long to realize that," Light admitted. "Nobody likes to be beat up and so on but there’s lots of jobs like that. I go to an NHL hockey game. Before the teams are even introduced, the referees are the first on the ice to make sure the nets and so on are okay, and the fans boo them. Well, they haven’t made the first call, they haven’t blown the first whistle and the fans are booing the referees. That’s the world we live in."

Light has had the opportunity to work with Josh Peterson over the last decade, his successor at the NHRA. He admits Peterson was perfect to take over in his retirement.

"What I’ve learned about Josh is he’s very level headed, he’s not one to make knee-jerk decisions," Light explained. "He thinks everything out, he’s calm. I guess the most advice I gave him is to enforce the rules equally for everybody. You can’t treat one of our superstars any different than you treat the guy that comes out and runs four or five races a year and doesn’t have two nickels together. The rule has got to be enforced equally. And if you do that, then even if you’re enforcing a rule wrong, your interpretation is maybe not what the racers think, at least if it’s the same, you’re consistent, that’s when you start to get the respect from the racing community. And if you don’t do that, you’re going to lose respect."

One of the great things about Storytellers at @CompPlusTV is the legends telling these precious stories. Here's one from the late Tom "Mongoose" @MongooseMcEwen - https://t.co/n7s4sfUar9

Funny, one would think the first bit of advice was the thick-skin requirement.

"I think he already knows that from his years of working with me. I have told people, and new people have come on board when they start," Light said. "Particularly on the technical side, the racing operations side, you’ve got to have a thick skin, you do. Josh has learned that.

Throughout life, it’s people that you meet and relationships that you make and NHRA has got a good, good leadership team. They’ve got all of their event workers who are dedicated, passionate, good people. That’s one thing I’m going to miss."

As stern as Light's mood was when he walked into the office, the reality of the last day on the job appeared to hit home.

"I’ve always been surrounded by a great team of guys and gals that are so passionate and dedicated," Light said. "Without them, none of this would be possible. But working those trucks and working tech and the staging lanes, the registration trailer, and the timing tower, sometimes under less than ideal conditions weather-wise, long hours because of delays for whatever reason, they’re so dedicated, so loyal, so passionate about the sport. You know you look at them, my job’s easy.

"They’re the true heroes in all this. Anybody in this position needs the support team like that. If you have the support team, time flies. And time does fly. 34 years of NHRA, it doesn’t seem like that. I don’t know if it’s just a function of just getting older or what, or enjoying what you’re doing. This is my hobby turned into a livelihood. If I wasn’t working here at NHRA today, I would have bought a ticket and be sitting in the grandstands watching."

Light pauses, as he stares out the window at the growing crowd for pre-race, taking in the moment. If he could speak to each one of those people down below and walking into the grandstands, he knows exactly what he would say.

As Light sees it, he's played his role today for the future of the sport.