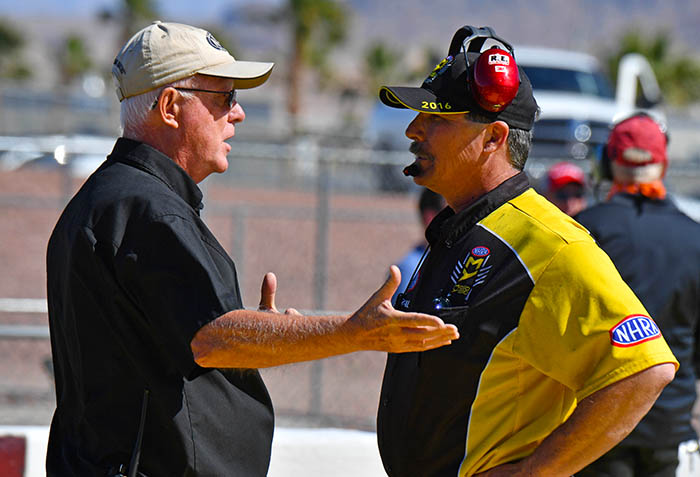 Mike Gittings neither entered nor exited his role as NHRA’s official starter in the most desirable way.

The former Northwest Division starter stepped into the position suddenly and unexpectedly in April 2016, at the Denso Sparks Plugs Nationals that’s coming this next weekend at The Strip at Las Vegas Motor Speedway. He served as interim starter in the wake of Mark Lyle’s fatal accident in the waters off Mexico during a vacation to celebrate his birthday and his anniversary with wife Marcia. The NHRA named Gittings the official starter – only its fourth in the sport’s history – May 5, 2016.

Then this Jan. 15, in what he described as “a call out of the blue,” Gittings was told the NHRA had decided to eliminate the official starter position.

Actually, the NHRA still has an official starter, but the title is one of several that belong now to the tandem of Brad Hardy and Ron Heath. They are Safety Safari members who help prep the track and handle set-up chores at each race after driving the equipment trucks from one national event to the next. Hardy is responsible primarily for pro starting and Heath for sportsman starting, but the two are able and expected to substitute for each other.

“They can easily swap out as needed in order to be sure we have back-ups and more efficiencies. And they both do other Safety Safari roles. They drive. They do a lot of the pre-race set-up. They do a lot of the track prep - which I think is really beneficial, in that when you’re doing track prep and you’re also the starter, you know that track from a number of different angles by the time it comes to race day. It was absolutely a move of efficiency,” Jessica Hatcher, the NHRA’s senior director of public relations and communications, said. Asked if this was a cost-cutting move, Hatcher said, “I think just more efficiency. It was ‘How can we be more efficient and build more identities into the process?’”

Hardy and Hatch will be the starters at every national event.

All of this seemed shocking to fans and racers who accorded the utmost respect to Buster Couch (1955-96), Rick Stewart (1996-2011), and Lyle (2012-16) and then Gittings. And it certainly seemed puzzling to Gittings, who was preparing for another season at the starting line.

“The last communication with who I consider my boss was on Sunday at Pomona [in November, at The Finals]. And I’d been trying all year long during the ’18 season to get a meeting and be able to talk to this person. Everything had gone great in ’18, I felt, other than I didn’t really agree with the track-prep call that was made for the pros but worked through that. That was one of my big concerns as a starter, safety on the track,” Gittings said.

“Finally had a meeting Sunday at Pomona and did raise some concerns about not being able to talk to this person all year, trying to constantly send him text messages. Then I raised some safety concerns about the starting-line area and was told, ‘Let’s get through today and finish Pomona and we’ll deal with this is December.’ I never heard anything all the way through the holidays, other than I took it upon myself to text people and say, ‘Merry Christmas and Happy New Year.’ Never did have any conversations and then got a call out of the blue Jan. 15 and was basically right out of the get-go told that the chief starter position had been eliminated, effective immediately,” he said. “There was no discussion, no talk of anything. It looked like everything was going to move into ’19. I had every indication . . . I’m not sure when the decision was made. It appears to me it was made pretty quickly in the beginning of the new year.”

Gittings said, “They said it was strictly a business decision. And I immediately asked, ‘Did I do something wrong? Was there something I did incorrectly? Was it a performance-related decision?’ I was told no: ‘It had nothing to do with anything you had done or your work, strictly a business decision, and we’re going in a different direction.’ And I just kind of took it at that. I didn’t know what else to say. My main concern was that I didn’t do something wrong.

“I felt very strongly that it was a big, big honor to be given that position. And I felt a very large obligation to Mark Lyle to continue what I felt he had started in the position. (working under him). So I really wanted to make sure that happened,” he said. “And I put all my effort into it and even expanded a little bit beyond it in things that Mark and I had talked about when we roomed together, things that he felt in the future he wanted to see. So I really wanted to make sure it wasn’t me, and they reassured me it wasn’t.”

Like everyone else who heard the news, Gittings asked straightaway how those responsibilities would be handled moving forward.

“Of course, I immediately said, ‘How are you going to do this? What are you going to do?’ My mind was really just shattered at the time, because that position, to me – whether I’m it or not, to be clear – just needed to go forward. It was just such a huge part of NHRA,” Gittings said.

“They said, ‘Well, we’ve got a couple of the truck drivers that have CDL that travel to all the events, anyway, and we’re going to have them do the starting.’ I thought, ‘OK. . .’ Instantly, because my head was spinning, I said, ‘How about if I was one of those guys?’”

The conversation from Glendora was a conference call with executives, and one of them asked, “You don’t have a CDL, do you, Mike?” He said he replied, “Well, no, I don’t, and I’m not going to go get one.”

Gittings said, “So that was their plan. Of course, my head turned to thoughts of ‘I know these people. Who are the truck drivers who have starting experience?’ I came with a couple of names, and that seems to be who they’re utilizing.”

What this means, in the immediate sense, for Gittings is, in his words, “I finally got a summer. I’m going to enjoy having a summer back.”

He said, “They told me I’m more than welcome to continue to work for the division. They don’t have any hard feelings against me.” He said he could help out in Division 6 or work at the CatSpot Northwest Nationals event at Pacific Raceways in August. “But I just don’t know if I really want to. I’m just in a regrouping mode right now.

“I’m just going to focus on my family and business. I have a business that I’ve been in for a long, long time that I always ran part-time and never really went at full-time. So that’s where my focus is now, to try to go at that full-time. It’s water-valve testing, backflow valve,” he said He has had the Washington State certification for more than 20 years to test systems in the area. “I’m 57, going to be 58 in May. I’ve got about four or five years before I want to pull my retirement. I’ll retire at 62, probably, and turn the page,” Gittings said.

“I’m never going to stop working. You’ve got to stay busy. I may go back and do a little racing, actually get back in the car and head out to Pacific [Raceways] or Bremerton [Raceway]. A friend of mine, Dennis Boley, just took over there [at Bremerton, Wash.]. So I might just go out there and goof off a little bit. I drove a pro car, still have it, a Firebird. I ran Super Street. It’s actually Dennis’ car. He let me drive it. I’d probably just go bracket racing for fun, nothing serious. That’s how I started,” he said. “I started at Pacific Raceways [when it was Seattle International Raceway]. I won a track championship in ’98. I actually won the pro bracket class there. That’s when I started to help put on races. I just started working out there, because they needed help. Then I parked the car and became a starter and kept going and going and going. Since 2000, I really haven’t had a good summer off.”

But the NHRA’s decision to use a new format for the starter’s position still weighs on Gittings’ mind.

“I wanted to make sure people knew that I feel as badly as the fans do that they’ve chosen to take that position away,” Gittings said. “I’m not sure whose decision ultimately it was or how they came about that, but I wish that they had continued it, regardless of whether they had wanted someone to do it at a lesser wage to save money or whatever . . . I just really wish they had kept it going for the history of the sport. Go find No. 5. I was happy to be No. 4. I did the best I could. But go find No. 5.

“It was just a shock that they took away the position. That’s it more than anything,” he said. “It appears to be a business decision, money-related, I’m guessing. I would hope that down the line, they’ll rethink it and put it [the dedicated official starter’s position] back in there. I always gravitated to the crew chiefs and starters when I became enthralled with the sport. They had the legends going to Gainesville, and they don’t think that’s part of it anymore? I’m perplexed.”

Were Lyle here, Gittings said, “I just think that he’d be disappointed in the decision, like I am. I’m disappointed in the upper management not realizing the importance of that position. I know there’s people around them who do.” He said he tried to be a faithful steward for the racers and for Lyle’s legacy. “In drag racing, you look for consistency. I tried to bring to it, and that’s what Mark tried to bring to it: a consistent, safe starting line.

Gittings said Light “felt the history, knew the history.” He said, “When Graham brought me in and he hired me, he said to me, ‘You know this is the most storied position in the history of the NHRA.’ I never thought of it that way. He said, ‘There have been more stories written about our starters probably than anything else.’”

This one arguably might be the most unsettling for the sport’s longtime followers.