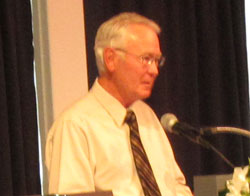 After 46 years of dedicated service to NHRA and the sport of drag racing, Dallas Gardner, NHRA’s board chairman, recently announced his retirement and will hand over the reins to current NHRA chief executive officer Peter Clifford effective immediately. Gardner will continue to work with the NHRA as a consultant.

Gardner spent 15 years as president, pushing forward a wide range of initiatives including the modernization of racing facilities, improved television programming, and cornerstone programs such as NHRA’s Youth and Education Services and the Jr. Drag Racing League, before becoming chairman of the board in January 2000.